This is another tajine idea. In French it's called Tajine de poulet au fenouil. The ingredients are two big bulbs of fennel, four chicken thighs, four chicken legs, one whole lemon, a couple of garlic cloves, and some Moroccan spices or curry powder. Add some potatoes if you want, or serve the chicken and fennel with rice or couscous. It's an easy recipe. 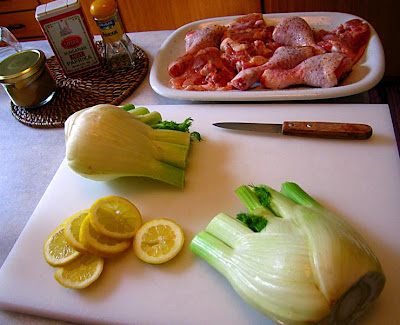 Ingredients for Moroccan chicken with fennel
If you have full leg sections of chicken as I did, cut the thighs and legs apart to make them easier to cook. I used four leg sections, but you could easily use six. Salt and pepper the chicken before cooking it. 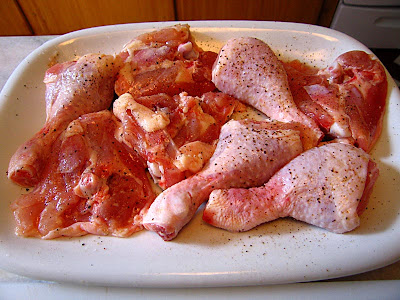 Chicken legs and thighs, salted and peppered
Wash the fennel bulbs, discard the blemished outer layers, and cut the bulbs into quarters. Cut the lemon into four or five slices and remove the pits. 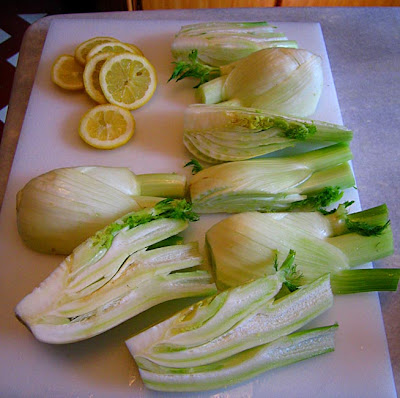 Fennel and lemon ready for cooking
Sauté the chicken pieces in a little olive or other vegetable oil. When they are starting to brown, add a good pinch of fennel seeds if you have some, a good pinch of hot paprika, and three tablespoons of curry powder (or your own mix of spices like cumin, ginger, turmeric, cinnamon, nutmeg, allspice, cayenne pepper, and others). 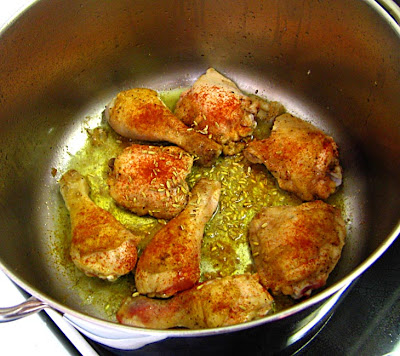 Chicken pieces browning with spices
Stir the chicken around with the spices and then add the fennel pieces and lemon slices to the pot. Throw in a couple of bay leaves and a couple of whole garlic cloves in their husk. Add not quite enough water to cover the ingredients — you can always add more water later if you think it needs it. 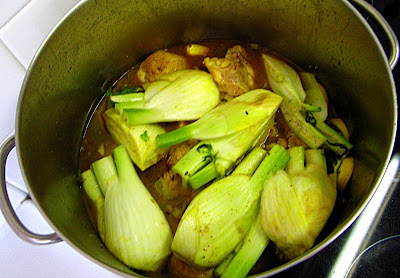 Chicken, fennel, lemon, and spices in the pot with some water
I decided to add some little red potatoes to the tajine because I had some in the cellar downstairs. Steamed potatoes are good with a curried sauce. 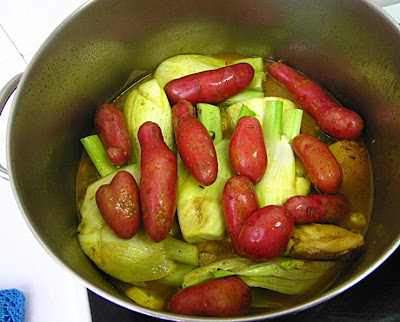 Add potatoes to the pot, or leave them out and eat
the chicken and fennel with steamed rice or couscous.
Cover the pot and let the chicken, fennel, and potatoes simmer on low heat for about 45 minutes or longer. Test the fennel and potatoes for doneness by poking them with a skewer or knife. If the chicken falls apart a little, that's okay. 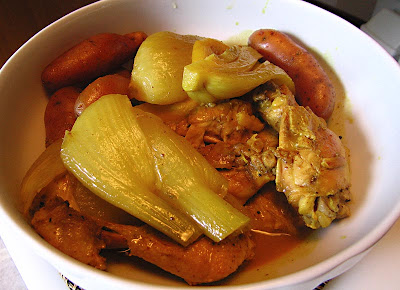 Moroccan chicken with fennel ready for the table
For mine, the chicken was falling off the bone and the fennel was tender. The potatoes were completely cooked. I thought there was too much sauce, so I poured it off into another pot and boiled it down until it reduced and thickened a little. Then I poured it back over the dish, which I had kept warm in the oven. Taste it for salt, of course.

I thought the cooked lemon slices were good to eat, skin and all. Walt thought they were a little bitter.

Another ingredient you can add toward the end of the cooking is a dozen or so big green olives. Give the olives about 15 minutes to poach in the sauce before you eat them. They will add saltiness, so be careful with the salt shaker if you add olives.
Posted by Ken Broadhurst at 06:34