Earlier this week the bread lady and I were talking when she stopped by to bring (or sell) us our daily baguette. We usually spend a few minutes chatting or gossiping when she comes by. On Monday, she told me that she and her husband had decided to look for an old house to buy down in the Auvergne region, in the département called the Puy de Dôme.

She said they had been looking at real estate ads on the Internet and now were ready to drive down there and see what the houses for sale looked like in reality. They know the area because they went down there on their vacation last summer, I remember, and they may have been down there many other times for all I know.

The bread lady makes her deliveries five days a week, with Wednesday and Sunday off. So she and her husband had decided to leave Tuesday afternoon, spend the night down there, and look around on Wednesday before driving back late that day. The place where they were going is about a three-hour drive from here. 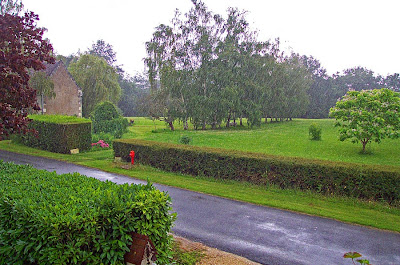 It's raining again today. I took this picture yesterday afternoon.
If you can't actually see the rain falling, you can judge by how
green everything is the amount of rain we've been having.
On Tuesday, I asked her again to tell me the name of the town near which they were looking for a house. She did, and I looked it up on the map. It turns out it is just 30 km, less than 20 miles, south of the village where Callie was born. I thought that was a funny coincidence.

Yesterday, the bread lady told me that they have now signed a contract on a house, and she told me the name of the village it's in. It's not quite a ruin, she said, but it doesn't have running water or any kitchen or bathroom facilities. She said it's four big rooms, each about 25 m2 (that's approximately 15' x 20'), and it needs a lot of work. The old stone walls need to be scraped and cleaned — she says she wants to leave the stone exposed. There are big beams that need to be sanded and stained. The stone floors need to be polished. While there's no running water, the place does have electricity. 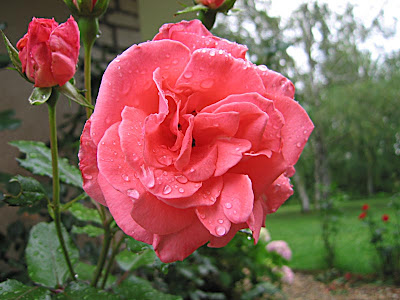 This is the result of a photo break between showers.
I didn't ask, but she volunteered the information that the price they are paying is deux millions — two million francs, I understood. But what francs, I didn't know. Before the euro was adopted as the national currency in 2002, France had used what came to be known as old francs (anciens francs) until about 1960, and then new francs (nouveaux francs) from then until 2002. People kept counting in old francs well into the 1980s or even 1990s — especially older people and people in rural areas.

It was very confusing until you got used to it, and now it's still confusing to hear people quote prices in francs instead of euros. When you get into large sums, it's hard to know if somebody is talking in anciens francs or nouveaux francs.

One new franc was worth 100 old francs. It was as if they decided to call a dollar a penny, so that five dollars became five cents, if you can imagine that. One hundred francs became one franc, and 10 new francs were worth 1,000 old francs. Is that clear?

The bread lady's two million francs, then, could have been either $4,000 or $400,000 in U.S. terms (you divide francs by five to get dollars). One conversion that always helped me keep it all straight in my mind was the value of un million, meaning one million old francs; that was $2,000. I figured it in my head really fast, and I concluded that it wasn't possible that they had bought a house for $4,000. 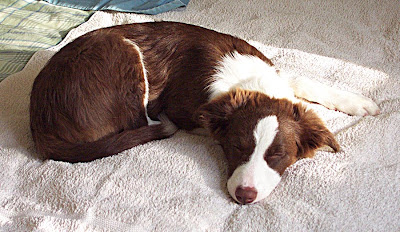 What dogs do on rainy days. There was actually a ray of sunshine
coming through the window the moment I snapped this picture.
But I also couldn't imagine that they had paid $400K for the house she described. Or that they would have that kind of money to spend even on a very nice house. You never know, though.

I asked her if her deux millions figure was in anciens or nouveaux francs. She realized how confusing it all was, and said, "Let me tell you in euros." She got out a calculator but the battery was dead. So she grabbed a scrap of paper and a pen.

I don't know where the two million figure came from, but she said the purchase price of the house they're buying is about 26,000 euros. That makes sense to me, for what she described, and for such a property in that area of central France. At current exchange rates, that a little less than $35K.
Posted by Ken Broadhurst at 06:41