Trimming, cooking, and eating an artichoke

To trim a fresh artichoke and prepare it for cooking, the first thing you have to deal with is the stem. If, like the ones I bought, the artichokes have five or six inches of stem still attached on the bottom, the best thing to do is to break the stem off using your bare (or gloved) hands. It can take considerable effort, but if you succeed in breaking off the stem right at the bottom of the artichoke, you'll see that a lot of big fibers pull out of the 'choke and stay attached to the stem, which you can discard.

The other option is to cut the stem off with a knife. And some people cook the stem along with the 'choke, either after cutting it off or having left it attached. The stem can be a little fibrous, but there is also plenty of good artichoke flesh there to eat.

Prepare a big bowl or pot of cold water to keep the trimmed artichokes in as you work. Add a quarter-cup of white distilled vinegar or lemon juice to the water to prevent the trimmed edges of the 'chokes from oxidizing and turning dark brown. 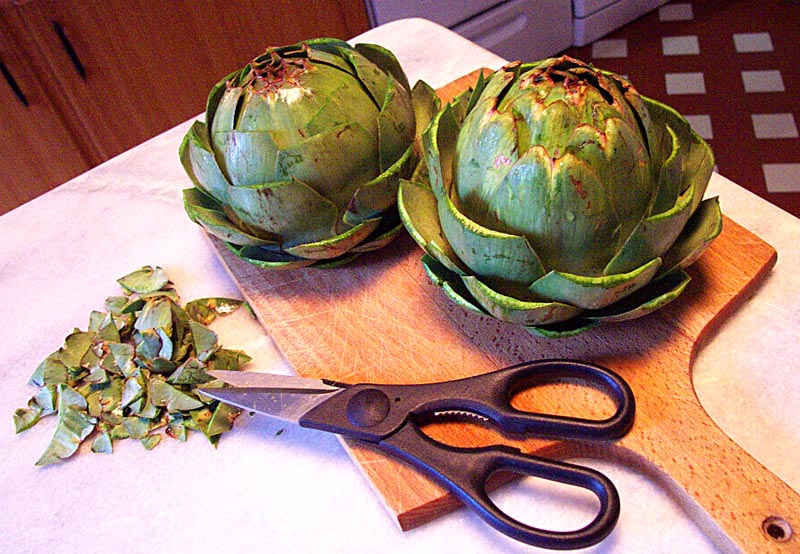 Trim off the top ends of the artichoke leaves with scissors.
The 'choke on the right isn't fully trimmed yet.

After you've decided what to do about the stems and dealt with that, the next thing to do is to trim off the top ends of all the artichoke's leaves (they're petals, actually, but never mind...). Artichokes are thistles, and there are sometimes sharp thorns on the leaf-ends. Cut off approximately the top third of each leaf with scissors or kitchen shears. Pull off the very bottom six or eight leaves whole and discard them — they're usually too tough to eat. 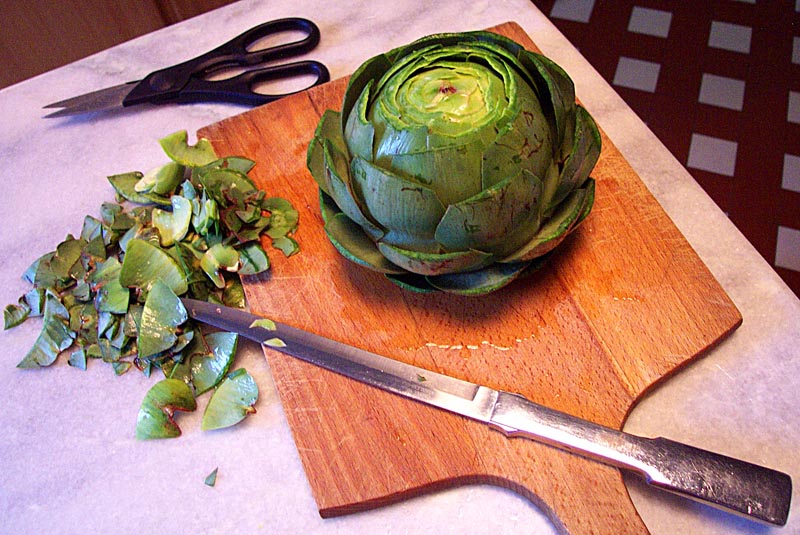 Leaves trimmed and top sliced off, ready for cooking

After the leaves are trimmed, use a big, sharp knife to cut off the top of the artichoke. Hold the artichoke on its side, grip it firmly, and slice off the top. Now it is ready to cook. Return it to the water bath if it is going to wait a few minutes before boiling.

To cook the artichokes, fill a big pot with water and set it on the stove to boil. Add salt and some vinegar or lemon juice to the cooking water. Distilled vinegar works just fine. When the water comes to the boil, drop in the 'chokes and let them simmer for 20 to 40 minutes, depending on size. Test them for doneness by poking a skewer or a knife into the bottom (where the stem is or was). They should be pretty soft. 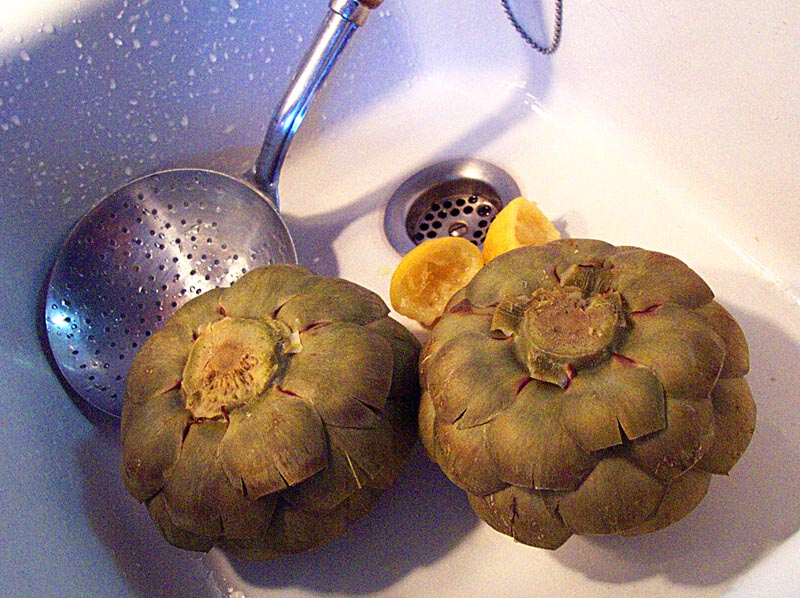 Cooked, draining, and cooling in the kitchen sink

When the artichokes are done, turn them upside down on a plate or in the kitchen sink and let them drain and cool before you eat them. You can eat them slightly warm or fully cooled.

Eat the artichoke by putting one upside-down on a plate and pulling the leaves off one at a time. Eat them with your fingers. Put the bottom end of each leaf in your mouth and scrape the soft flesh off the bottom of each leaf with your teeth.

Normally, people in France serve artichokes with either vinaigrette or mayonnaise. The home-made versions of the sauces are obviously the best, but commercially prepared dressing or mayonnaise is OK too. Put a little bowl of the sauce next to your plate. Pull off an artichoke leaf. Dip the bottom end of the leaf into the sauce. Eat. It's good.

I didn't take any pictures after the artichokes had finished cooking yesterday. But Elise of Simply Recipes has published the definitive guide to trimming, cooking, and eating a whole fresh artichoke on her food blog.

As you'll see, after you've eaten all the edible parts of the leaves, you're left with the inedible part called the choke, which is attached to the edible bottom. Scrape the choke off the bottom and discard it. Eat the fleshy, tasty artichoke bottom with a knife and fork and some more vinaigrette or mayonnaise.

The only other thing to foresee is a bowl in which to put the artichoke leaves and chokes as you pull the 'choke apart and eat the edible parts. Be warned: you'll have the impression there's more left when you finish eating than there was when you started. It's just an illusion, and you'll know that because you'll be feeling full at that point.
Posted by Ken Broadhurst at 06:49