The owl in the chapel

Leaving Méhers after the mayor's tour, Claude and I drove through a wooded area called La Forêt de Gros-Bois — Big Woods Forest — south toward Noyers-sur-Cher, which is the town across the Cher river from Saint-Aignan. 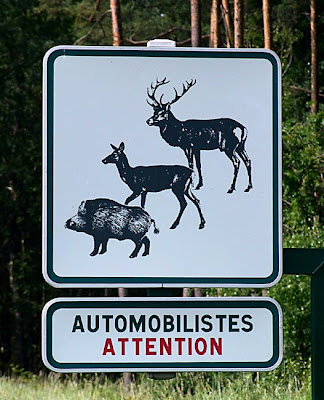 There's a sign like this one on the road we drive to get home
from Saint-Aignan. We have seen these two kinds of deer often
and once we saw wild boars in the Forêt de Gros-Bois.
Noyers and Saint-Aignan are at the southwest edge of the Sologne [suh-LUN-ya], a forested area that is home to a lot of wildlife. Wild boars, foxes, hares, two kinds of deer, badgers, and many water birds and birds of prey are plentiful in the region's pine and birch forests, and there are many small lakes. The Sologne is known as good hunting grounds, and game animals are an important part of the area's culinary repertoire (along with the asparagus and strawberries that grow well in the sandy local soil). 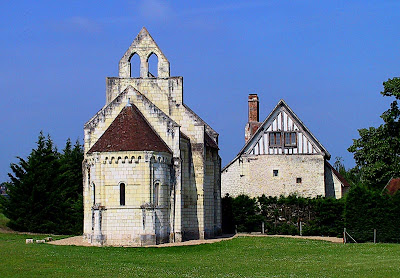 I haven't been able to find much information about the chapel. The Michelin green guide just says that it used to be part of a maladrerie, which is an old term for a hospital where people with leprosy were cared for. I suppose that's what we would call a leper colony. Another book I have (Les Guides Illustrés : Les Châteaux de la Loire, published by Hachette in Paris in 1924) says the chapel was built in the 12th century, so it's close to 900 years old. 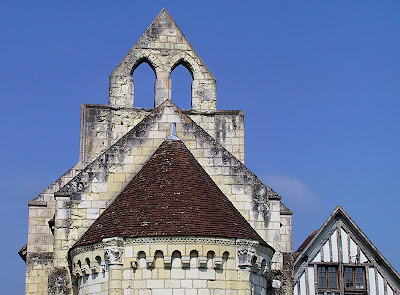 The chapel's roof and bell tower
A house stands just a few feet from the front of the chapel, so you can't really get much of a view of it from that side. The chapel was built with the local limestone, or tuffeau. I has what is called a clocher-pignon, the bell tower you see in the close-up shot above. 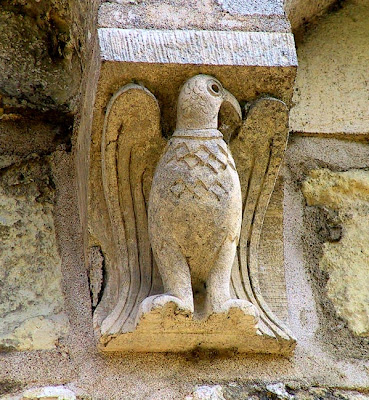 Carved stone details on the exterior walls
Claude and I were taking pictures and she asked me if we could go inside the building. I told her it had always been locked when I'd been there before. And sure enough, the side door was bolted. On the off chance, I went around to the front to try that door. I was surprised to find it unlocked. I pushed it open and got my first glimpse of the interior. It's like night-and-day compared to the exterior — the building is a complete ruin on the inside. 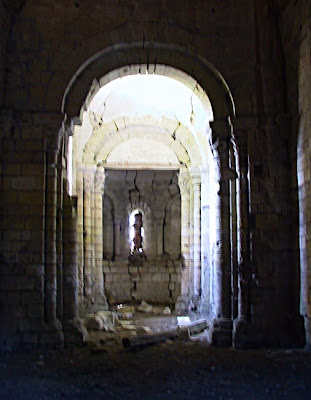 Inside the chapel, fallen beams and stones
Claude came around to the front of the building and we stood just inside the doorway, taking in the desolate scene. We didn't dare go farther in — it looked too dangerous. Then movement above caught my eye and I heard the the swishing sound of beating wings. A big white bird flew across the ceiling and ducked into a hole in the wall just above our heads. What was it? It was too dark in the chapel to see much or take a good photo.

My first thought was that it was a pigeon, but I realized that it was too big and very white. It had to be an owl. Just at that moment it emerged from its hiding place above the front door and flew across the ceiling again, landing on a stone ledge at the other side of the room and looking out at us. It was like a ghost, and it seemed discourteous of us to have invaded the creature's space. We backed out and closed the door. 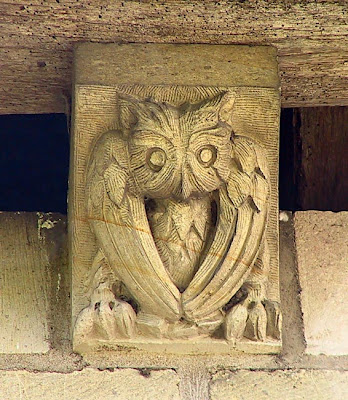 The owl in stone
We stepped outside and walked around the north side of the chapel. I looked up at the stone carvings around the building's roof-line and the first one I saw was, of course, a representation of an owl. 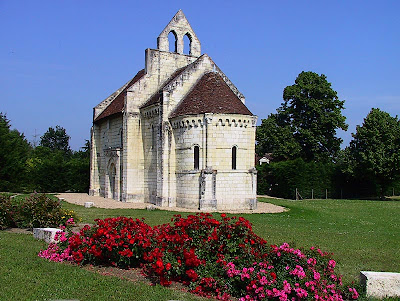 One final view of the Chapelle Saint-Lazare in Noyers-sur-Cher
After looking a my bird books, I think the bird we saw in the chapel must have been a barn owl (Tyto alba). There appear to be two races of barn owls, one with tawny-colored under-parts (Tyto alba guttata) and one with white under-parts (T. a. alba). The latter is the one we saw. The Peterson Field Guide says it is the one most commonly seen in Western Europe.

The French bird book I have, Les Oiseaux de France by Jean-Claude Chantelat, gives the name of the barn owl as l'effraie des clochers, which means something like "belfry scarer" — the verb effrayer means "to frighten." Other common French names include dame blanche (white lady) and chouette des clochers (bell-tower owl). It has a 36-inch wingspan (that's o.9 to 0.95 m), so it's not a small bird. La dame blanche is sedentary in France.
Posted by Ken Broadhurst at 06:12