I mean snails without shells, not any other meaning of the word slug. A slug is called a limace in French, and people don't eat them. Many years ago, when I used to take meals in university cafeterias in Aix-en-Provence and then in Paris, I always saw people turning over the leaves of their lettuce before they ate any to make sure there were no slugs hiding in the salad. Washing salad was not a strong point of the university restaurant staff.

On her French blog Vieux c'est mieux a couple of days ago, Claude posted a picture of a big orange slug (une limace rouge) that she took in the park at the château de Chenonceau when she was there a few weeks ago. I told her that I would post a picture of a California banana slug this week. 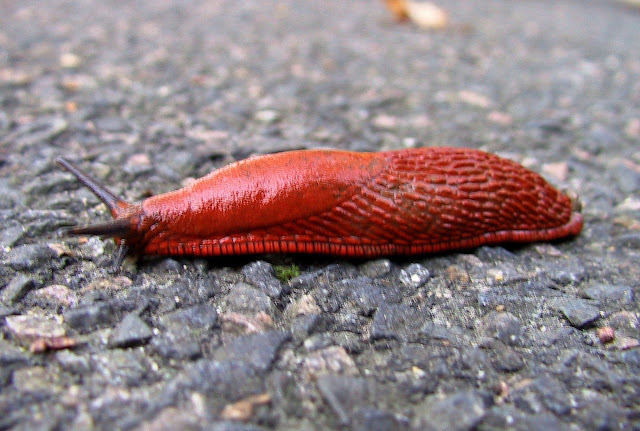 I had found such a photo, long forgotten, when I was recently sorting through, inspecting, and organizing the two or three hundred CDs that I have archived all my photos on over the past 10 years. I ran out of space in my CD storage system so I had to transfer everything to a different system. That involved looking at some of the older CDs to see what was on them. 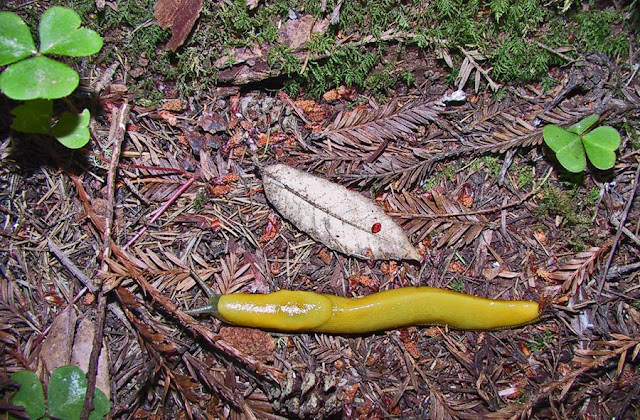 A California banana slug that I photographed at Butano
State Park in the Santa Cruz Mountains ca. 1999.

I would include a link to Claude's blog in this post but both her sites seem to be down this morning. I know she's been having trouble with her blogging software.

These two slugs are of similar size, but the yellow one was all stretched out, whereas the orangey red had assumed a more compact shape for its street crossing.
Posted by Ken Broadhurst at 08:02