It feels so strange this year, not having any summer weather. Or at least not since April, which was abnormally warm and dry. These gray, rainy, blustery days... no, weeks — more like October than June, except it stays light until nearly 11:00 p.m. — remind me too much of the weather in San Francisco in summertime. They make me feel restless and dissatisfied. 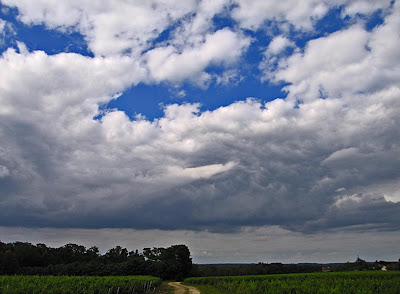 Look, blue sky! It's nice to see that once in a while.
The photos are from a walk with Callie a couple of days ago.
The lack of extended periods of warm, sunny weather in San Francisco during the summer months was one of the things about life there that really tired me out. Now I'm getting tired of this weather we're having in Saint-Aignan. 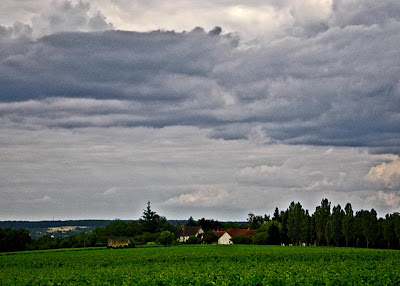 Our house and a neighbor's under a brooding Loire Valley sky
You can't really enjoy being outside, unless you keep moving. You have to dress in long pants, sweatshirts, and shoes and socks. For all the other summers since we've been here, it's been shorts, tee-shirts, and sandals from May until October. With the exception of last August, that is, when we also had a rainy cool spell.

Our garden, which we put in late because the rainy weather in May was not conducive to working the soil and setting out plants, is very much en retard compared to past years. I'm starting to wonder if we will get any tomatoes, eggplants, peppers, and squash at all this season. I'm sure we will get some, of course, and the plants are growing. There are blossoms on the tomato plants. But the temperatures are not yet hot enough to coax the plants to set fruit. 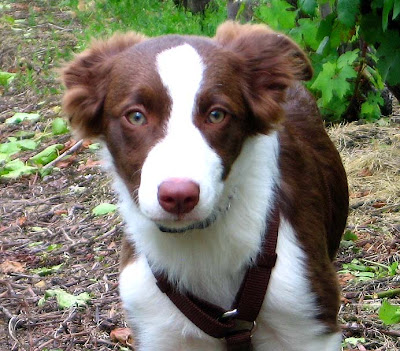 Callie, 26 June 2007. She's doing fine for now and
enjoying walks in the vineyard again. Sweet face...
It's supposed to rain again today, to be fairly nice and significantly warmer tomorrow, and then be almost hot on Sunday, but with thunderstorms. I guess that's better than blustery, chilly, and misty/drizzly. Maybe we'll have some exciting thunder and lightning.

Because we have Callie this year, we aren't getting out much. We haven't seen our local friends nearly as much as in past years, so we are kind of out of the gossip loop right now. It wasn't supposed to be like this. We waited until springtime to get a dog, calculating that we would be able to spend a lot of time outdoors in the sun with her. We'd enjoy a season in the yard and garden with her, where she could run and play — and not chew up everything in the house. 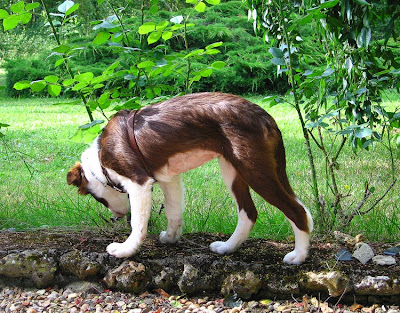 Here you can see how her belly was shaved for the operation.
I'll spare you the pictures of the six-inch incision and all the
stitches. I wish we knew why the got sick the way she did.
Instead, as soon as we got Callie in early May, the weather went south. If anything, I'm feeling a touch of cabin fever. It's just the way I used to feel in June, July, and August in San Francisco. Close the windows and doors, dress warmly, and stay inside as much as possible.

No sitting out on the deck and watching the stars as the dark closes in at 11:00. No stars anyway, too cloudy. Few bright sunny mornings when you feel like going out and pulling some weeds or watering (not necessary this year) or repotting plants. Or just listening to the birds sing.

Instead, we get weather that the forecaster on France Inter radio just characterized as maussade. The dictionary definition of that term: Qui inspire de l'ennui. - Ennuyeux, terne, triste. It's weather that inspires boredom, restlessness, sadness. 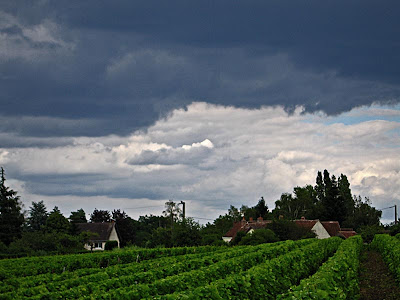 Remember Judy Collins singing that melancholy Randy
Newman song called "I think it's going to rain... today..."
The difference here is that this situation is likely (though not sure) to change. In San Francisco, people always smugly remarked that there were never more than three sunny, warm days in a row. They were glad it didn't get hot and muggy there. After the third decent day, the city's natural air-conditioning — fog and cold wind off the ocean — would kick in and the air would turn chilly again. People enjoyed that.

At least in Saint-Aignan, there is a chance that it will turn hot in July and stay that way in August. The garden hopes it will happen. I hope it will happen. I know I'm not alone in this.
Posted by Ken Broadhurst at 06:44