Life is just a bowl of cherries

Wow, that little artichoke interlude inspired a lot of comments. And I ended up with a lot of new ideas for eating artichokes. It's too bad that our plants are unlikely to produce any 'chokes this year.

I posted some topics last week about the time we spent with Claude of Blogging in Paris and Vieux c'est mieux when she came to Saint-Aignan. Claude has posted a slideshow of her Saint-Aignan pictures on Flickr and the photos she took at the Zoo de Beauval in this blog entry. 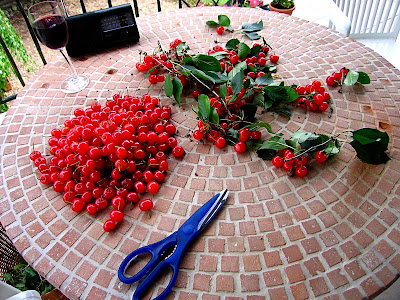 Cleaning up the cherries I picked, and enjoying a late afternoon
glass of Gamay and one of my favorite French radio programs
Yesterday was another cherry-picking day. I went out to look at the cherry tree on the edge of the vineyard a couple of days ago and realized it was still covered in bright red fruit. It was supposed to rain yesterday afternoon (but it never did) and I thought I'd better go get more cherries, which are very ripe now, before the rain ruined them.

Thanks to whoever owns the plot of land that the cherry tree is growing on. I hope you will continue to ignore its existence. Be assured that I will take good care of that tree for you.

By the way, this week marked the fourth anniversary of the day we moved into our house here at La Renaudière near Saint-Aignan. The first night we spent here, after four or five days of intensive and extensive house-cleaning, was June 12, 2003. 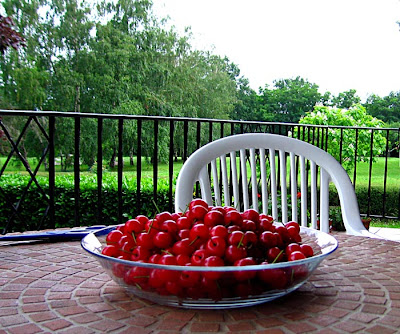 Life is...
I don't know why it took me four years to find that cherry tree. But given the five apple trees in our back yard, our generous neighbors' peach and quince trees, the new-found cherry tree, and our American friends' plum orchard not far from here, we don't lack for fresh, seasonal fruit. I might never have to worry about confiture again, since in the pantry I now have pints and pints of apple and quince jelly, as well as many jars of peach, cherry, and plum preserves, all of which I've made over the past three years.

So what are we going to do with these cherries? Walt is going to make another clafoutis, which is about the best way to have cherries in dessert form. The cherries are a little sour, so they are better cooked than eaten raw. 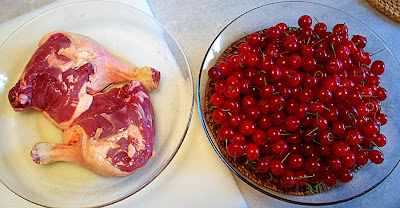 Duck thigh-leg pieces and a bowl of cherries
And I'm finally going to make duck with cherry sauce for lunch today. The duck is already cooking. I'm making it into confit by cooking it in a large amount of duck fat, which I had in sealed jars in the refrigerator. Walt bought the duck when he went grocery shopping at Intermarché earlier this week. 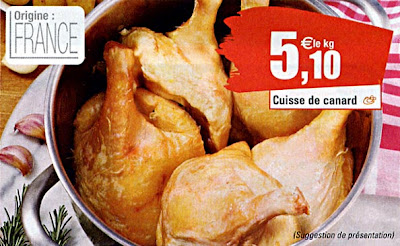 Duck legs for €5.10 a kilo — that would be about $2.30 per pound
if the dollar were worth anything. At current exchange rates,
it comes out to something like $3.05 a pound. Still, such a deal!
A while back I did a topic on making confit of duck. It's here. If you search my blog for the word "confit" you'll find several other topics about ducks and geese. 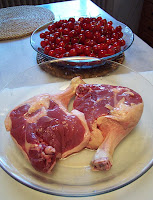 And here's what I'm planning to do today. I found this blog topic called Canard aux Griottes by searching in Google France. Griottes is the French word for sour cherries. And now I've discovered a new blog — Lugar do Olhar Feliz, a bilingual blog based in southern Portugal.
Posted by Ken Broadhurst at 07:52