Of mushrooms, plums, and cacti

Okay, big news this morning. It has to do with the weather. Can you guess? It's RAINING! Today it's a fine steady rain falling from low gray clouds. Pretty soon we are going to have to develop more words to describe all the different kinds of rain, the way people in the polar regions have dozens of words for different kinds of snow. (Or used to, if you see what I mean.) 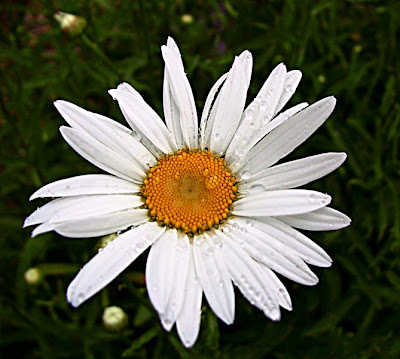 A daisy with raindrops
Come to think of it, there are already a lot of French words to describe various kinds of rainfall. Pluie fine, bruine, averse, giboulée, ondée, déluge, trombes d'eau, torrents, grosses gouttes, des cordes, comme vache qui pisse, and on and on. Maybe that should have been my first clue. The only one they don't have in French has to do with it raining des chats et des chiens. 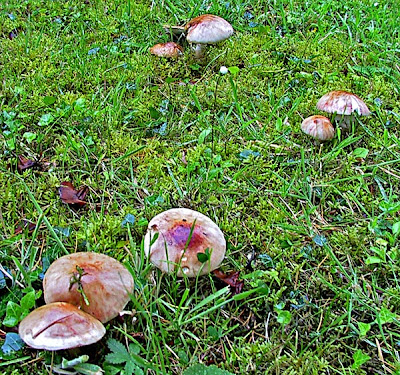 Champignons, 22 juin 2007
So here it is late June and we have mushrooms sprouting in our yard. There are three different kinds, but two of them are growing under big trees where it is too dark in the morning gloom for me to take a picture of them that isn't totally blurry. This is the kind of weather that produces a lot of blurry and grainy photos.

If Gisèle comes over and sees these mushrooms, she will probably encourage us to pick them and cook them into an omelet or something. We are not that adventurous. Besides, they are probably growing where Callie has fertilized the ground, if you know what I mean. 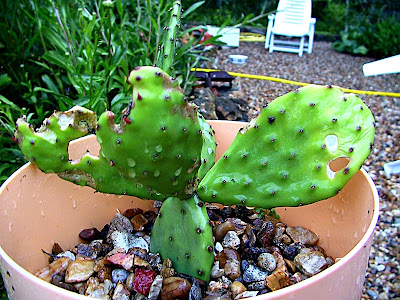 Le monde entier est un cactus,
il est impossible de s'asseoir-oir-oir...
Not only do we have a mushroom bloom on our hands (don't take that too literally), but we have an invasion of escargots as well. I notice that the snails don't eat the mushrooms — they are probably too smart, despite their tiny snail brains, to take chances like that. But escargots do eat cacti, I've learned, spines and all.

This is probably the snail equivalent of browsing in the imported foods section at Intermarché, where you can get Mexican tortillas, fajitas kits, and salsa in jars. Except in this case, what's being treated like a burrito is the cactus my friend Charles brought me from Southern California, which was growing so beautifully in the hot April weather we had. The recent damp has obviously taken its toll.

When I took Callie out for a walk yesterday afternoon — it wasn't raining but it was threatening to — she didn't want to go out into the vineyard because there was a big yellow tractor out there going up and down the rows of vines pruning or spraying something. So we took a walk around our neighbors' extensive yard. The neighbors are in Blois right now; that's where they live when they aren't spending vacation time in their country house. 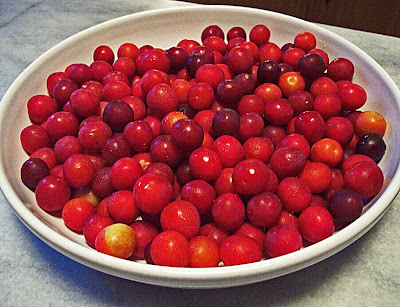 Petites prunes — that's "little plums" in English.
Walking around the edge of their property, I spied a tree that is bearing red fruit. Cherries? No, plums this time. Little red plums. I tasted a couple. Sweet and good. Red skin, yellow flesh. A little later I took the dog home and went back over there to pick some plums — or pick some up, actually. There were more ripe ones on the ground than on the tree.

I'm sure the neighbors won't mind. As you can see from the picture, the ones I got were in beautiful condition, and this morning they are perfuming the kitchen with their good plummy aroma. At least 95% of them were already on the ground. I have to figure out what to do with them. Jam? Clafoutis? A crumble? I'll have to spend some time pitting them, whatever I decide to do. 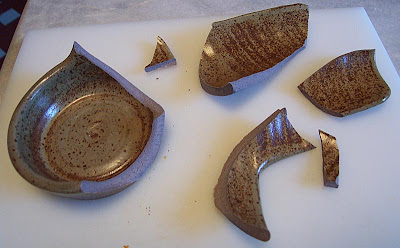 I'll try to salvage this by gluing the pieces back together.
I had a kitchen accident yesterday. I don't think the item I broke ever made it into Walt's Kitchen Collection feature on his blog. It was a pottery spoon-rest that I kept next to the stove. We bought it in 1993 in a market in the town of Cadenet in Provence, when we were on the trip that Walt is currently chronicling on his blog (though he hasn't gotten to the Provence part yet).
Posted by Ken Broadhurst at 07:02