About thunderstorms and dental charges

We woke up to thunder at 5:00 this morning. It was one of those textbook thundershowers. First there were low rumblings off in the distance to the southwest. Daylight was just beginning to break. The dog was awake and listening.

Then there was the first flash of lightning. I started counting. One-one-thousand, two-one-thousand, three-one-thousand... The storm was nearly 20 miles away. After the next bright lightning flare, I only got up to 15. Then 12. Then seven. Finally four-one-thousand was the highest I could count before there was a loud thunderclap. That's as close as it got. It moved past us on the west and continued north. 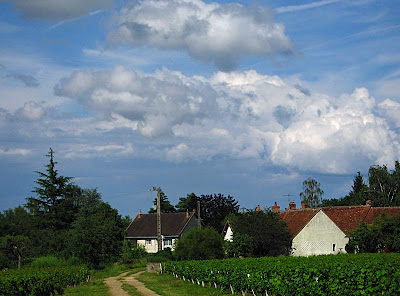 La Renaudière yesterday afternoon, 18 June 2007
We had eight or 10 bright flashes of lightning and claps of loud thunder between 5:00 and 5:30. The wind came up, rustling the leaves of the linden tree outside the bedroom window. And it rained — lightly at first, then much harder, and then in a steady light rainfall that lasted until about 6:15.

In the middle of all that, it was time to take Callie out for her early-morning constitutional. I put on my rubber gardening shoes and took an umbrella with me out into the yard. Otherwise, I was wearing shorts and a tee-shirt. Callie did what she needed to do and then scooted back into the house to get dried off. 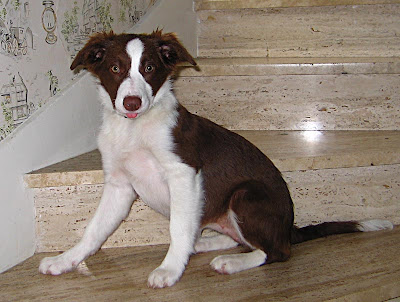 ************
A couple of weeks ago I had to go to the dentist's to have an old filling repaired. I mentioned it on the blog then, and lately I've been wanting to tell you about the cost of dental care in France. I'll do it here.

When the filling replacement was done and after scanning my new French medical insurance card into the office computer, Dr. Christian Bigot presented me with a bill for €46.29. That seemed very reasonable to me. I assumed he was just charging me for my portion of the cost of the treatment and that the French national medical insurance plan would pick up the rest of the tab. 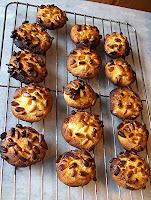 I even asked Dr. Bigot if he knew what percentage of the cost was being covered. He said it depended on the plan I was enrolled in. Even if my coverage is only 50%, I calculated, that would mean the treatment cost less than a hundred euros. I've been happy with the result.

The other day I got a statement from the medical insurance plan up in Blois. It showed the €46.29 dentist's charge, and then showed a reimbursement of about €32.40. I looked at that and thought well, the social security coverage is less than 50% after all. I thought I had paid more than half, and they insurance had picked up only the €32.40.

And then I realized (thanks to W., who explains these things to me) that, no, the national insurance had deposited a reimbursement of €32.40 into my bank account. The total cost of the dental treatment was €46.29, and I was getting 70% of that, or €32.40, back! How reasonable is that? A new filling for about fifteen euros.
Posted by Ken Broadhurst at 07:01