A few days ago Claude published a picture of a bronze figure she saw on a tomb at the Montmartre cemetery in Paris. I looked at it and thought I recognized it, even though I have no memory of ever walking around that cemetery. Claude said the figure represented an unknown Polish soldier.

I thought about it a little more and remembered that the statue I had in mind is located in the courtyard at the château de Montrésor. Montrésor is a village about 12 miles south of Saint-Aignan, and the château there was bought by a Polish family named Branicki about 200 years ago. 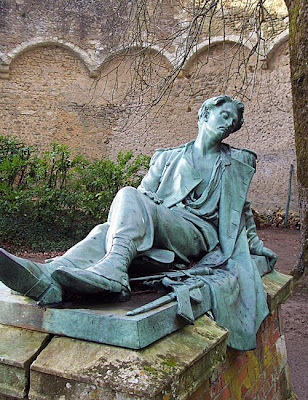 The statue in the courtyard at Montrésor
February 2005
When Claude was here about a month ago, she and I drove down to Montrésor (among many other places on a whirlwind of a day). We walked through the 16th-century church there, but we decided not to go into the château grounds. We just didn't have time. 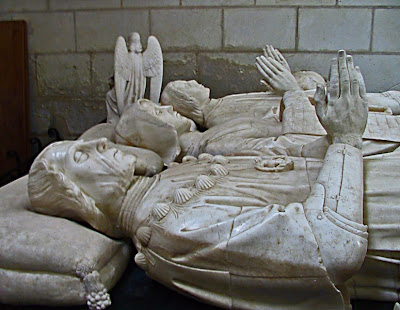 Funerary sculptures in the church at Montrésor
June 2007
I've posted topics about Montrésor several times, with numerous photos. They are here and here. It is one of the 150 French villages that has won the Plus Beaux Villages de France designation. The château is the one where my friend Laurie played the piano that had been played by Chopin. 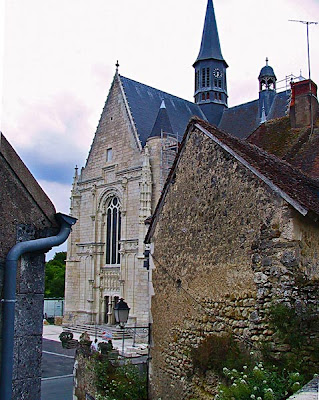 The 16th-century church at Montrésor
Montrésor has a lot to recommend it. There's the church, the château, and a river walk from which you get great views of both. Nearby is the town of Loches, not to mention the Chartreuse du Liget and the old fortified farm called La Corroirie. And the château de Montpoupon.
Posted by Ken Broadhurst at 06:38