Claude (Blogging in Paris) and I left Chémery Tuesday morning and headed back toward Méhers on our way to Noyers-sur-Cher to see an old chapel there. As we drove into Méhers again, we noticed the cemetery on the side of the road and decided to stop and have a look-round, as they say.

I had also noticed a sign pointing to public toilets in Méhers when we passed through an hour or so earlier, and we also wanted to visit those. So we went back and parked alongside the locked-up church on the village square. 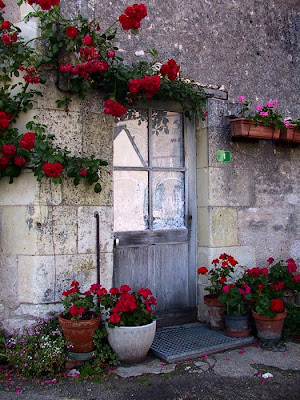 In Méhers, beauty is where you find it.
Biological needs attended to, we walked back down the road toward the cemetery. Now don't get the idea that Méhers is a Disney-esque setting or an idealized movie set. It's just an ordinary French village. A road runs right through the middle of it, lined with newer (that means 19th-century) and older houses and farm buildings, in states of repair ranging from the impeccable to the deplorable. 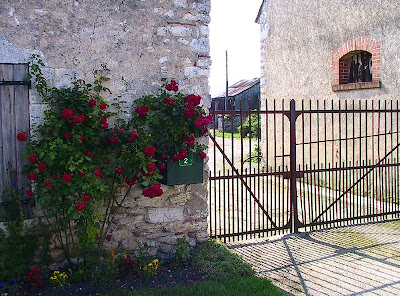 Scène on the main street in Méhers
In Méhers, there's no traffic to speak of, so it's not noisy or dusty, but it also isn't knock-your-eyes-out charming or beautiful either. If you take the time to walk through, though, you see charming and beautiful things. That's what we did. 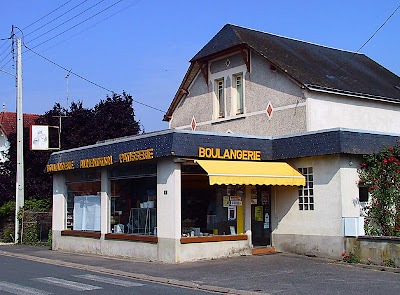 The general store on main street
Just across the road from the cemetery, which was our destination, there's a modern looking boulangerie-pâtisserie-
épicerie, a kind of general store selling bread, sweets, and groceries to the locals. It's a storefront that looks to have been added onto the street side of a big, newer house, not quite a maison bourgeoise but also not a cottage or a farmhouse. 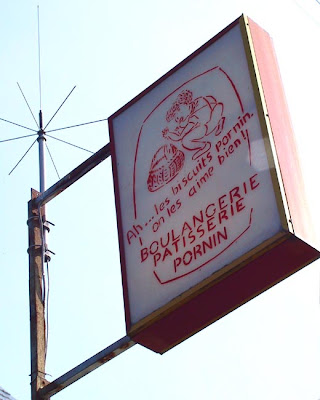 Antenna and sign at the Boulangerie-Pâtisserie Pornin
Claude and I were busy taking pictures of everything, included a sign perched high over the front of the boulangerie and a funny little antenna above it. We were speculating about the purpose of the antenna and lamenting that the sign was so back-lit — the sun was still fairly low in the southeast sky. 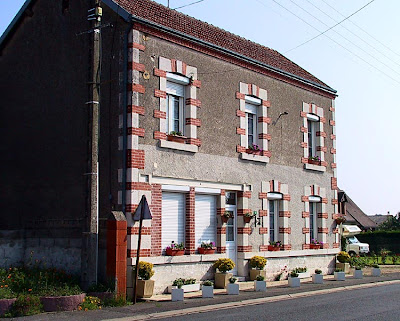 The house across the street from the cemetery

As we snapped and chatted, a rather hefty young man in bermuda shorts came out of the shop to see what we were doing. He apparently worked there. « Vous prenez des photos du village ? » he asked. We said yes, it certainly was a nice morning for it. Claude asked him about the little antenna, and he said it was an old CB antenna that is no longer used. 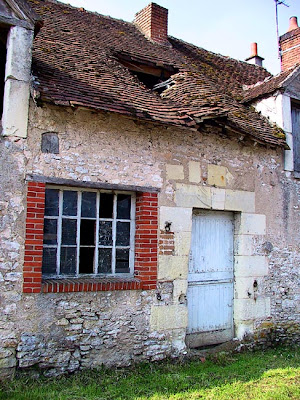 This one could do with a little work. It's also on the main street.
Then Claude asked the shop employee if the village church was ever open to the public. He said all we had to do was stop in at the mairie, the village hall, and ask for the key. We had walked by the mairie, just down the street a ways — that's where the WCs were — so we said we would stop in after we had our look-round in the cimetière. 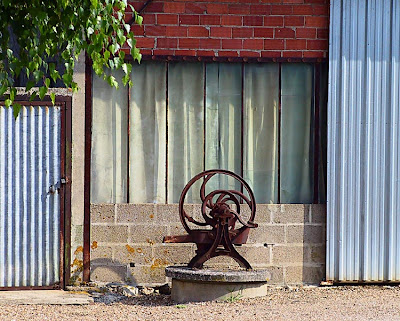 We couldn't figure out what this piece of machinery was for.
Claude pointed out that the shop employee was obviously intrigued, and maybe even a little suspicious, of our picture taking, but that he had been very polite and discreet in his interaction with us. Claude too was once stopped by the police and questioned about her picture-taking when somebody reported her activity as suspicious. She was interrogated in Normandy; Walt and I were similarly stopped and questioned in the suburbs of Albany, NY, last year, you might remember. In this case, the gendarmes were not summoned. I told Claude that the young shop employee probably didn't have much else to do besides talk to us, since there were absolutely no customers in sight. 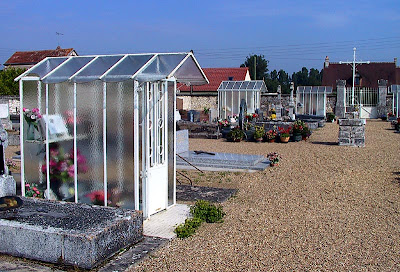 Greenhouses in the cemetery
We spent a few minutes walking around the cemetery. It's most distinguishing feature was the half-dozen or more greenhouse-like structures that protected several of the graves and the plants, flowers, and knick-knacks left on them by the deceaseds' friends and family members. This is a typical French cemetery: no grass, just gravel or hard-packed earth around the graves and tombstones. 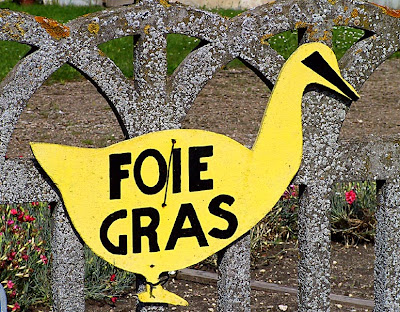 A sign on a fence along main street pointing drivers toward
a farm where ducks and geese are raised for foie gras
Our curiosity about greenhouses satisfied, we walked back to the mairie, waving good-bye and thanks to the shop employee as we passed. Just a little farther on, the village hall door was right on the sidewalk, and it was slightly ajar. A man inside was sitting behind a counter and talking on the telephone. Claude noticed that the hours posted on the door were 1:30 to 5:30, and here we were barging in at 10:30 a.m. We stood there and waited for the man to finish his phone call. 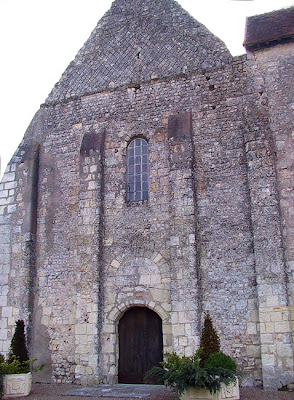 The front of the village church in Méhers
We apologized for arriving outside normal working hours and said we wanted to see about getting the key to the church. The man hesitated but then said he guessed he could open it up for us and show us around. He was perfectly polite and friendly. He got the key and we left the building to walk the few steps over to the old church.

As we walked, he talked about the village and proposals to build new houses all around it. I'm not sure how the subject came up. He said as many as a dozen new houses a year are being planned. And then he started talking about one specific plot of land that somebody wanted to build on. 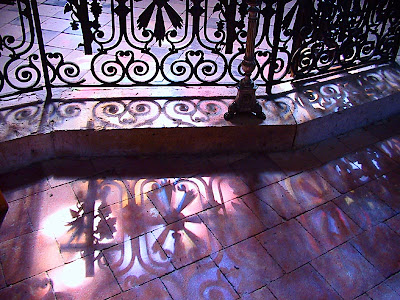 Inside the church in Méhers, nice light and shadow
He pointed to it off in the distance, and you could see out across the fields from the churchyard to a distant road and little bridge. "Government planners rejected our proposal to build three or four houses on that piece of land," he said, "because they said the new houses would spoil the view of the church from the bridge over there." Only then did he tell us that he was actually the mayor of the village and had been for nine years.

Church Street in Méhers
"As you can see," he said, "the land we wanted to build on is a little valley, and the one-story houses we proposed would not have blocked the view of the church at all. But that's how the government does things in France. They never make it easy." He said he half expected the planners from Blois or Paris to put in their report that they wanted to protect the view of the church tower from out in the countryside. The Méhers church doesn't have a tower, he pointed out. 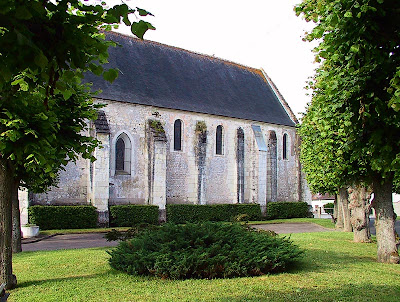 L'église de Méhers
He opened the church door and showed us in. It was a very high, not very wide place with a vaulted wooden ceiling and beams. The altar is registered as officially historic, he said. We looked around for 10 minutes or so, said our thanks, and let him get back to battling the bureaucracy.

We headed for Noyers and had our encounter with the ghostly white owl that lives in the Chapelle Saint-Lazare.
Posted by Ken Broadhurst at 06:28