Last week on an Internet travel forum I participate in, an American who was spending some time in Paris posted a question to ask people what they thought a good French croissant aux amandes — an almond croissant — should look and taste like. She had bought one and had been surprised to find that it was soggy with syrup rather than flakey and light.

I found a picture of a good almond croissant on a blog (The Girl Who Ate Everything) and posted a link to it on the forum. The discussion of croissants aux amandes went on for a few days, with a lot of people weighing in with opinions, experiences, and recommendations about where to find the best one in Paris.

Well, that set my mouth to watering. I don't remember what day of the week it was, but the fact is that our bread lady delivers to our front door five days a week. On Mondays and Saturdays she comes at about 9:00 a.m., but on Tuesdays, Thursdays, and Fridays her route brings here here at about 11:00. That's a little too late for a breakfast of croissants aux amandes. I waited, and then kind of forgot about it. 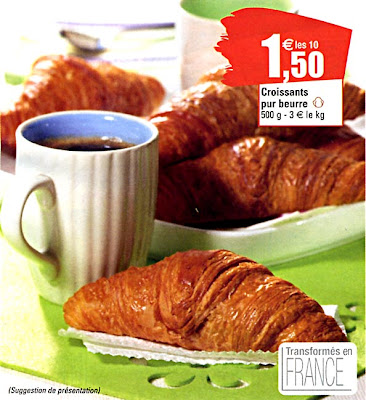 Ten butter croissants for €1.50 at Intermarché this week. I bet you could pay that much for one croissant in a lot of places.
Friday came around, and I remembered to ask the bread lady if I could place a special order for an almond croissant the next morning. I don't normally have any on Saturdays, she told me, because the bakery usually sells out of croissants on Fridays. It's only when the baker has left-over croissants that he makes croissants aux amandes out of them the next morning.

Really? I said. I never realized that almond croissants were a way to use up leftovers. Yes, she said, you can't really make a good almond croissant out of a fresh butter croissant. The fresh ones are too delicate. The croissants you use needs to be slightly stale.

I reported that to the Americans and British people who read the travel forum, and some were frankly disillusioned. Others just wouldn't believe me at all. They were sure that the Paris bakeries they frequented would never pull such a stunt. One woman in Sacramento said the Vietnamese baker in her neighborhood baked almond croissants fresh; she was sure. I have no reason to doubt her.

The next day, the bread lady surprised me by bringing me an almond croissant, despite it being a Saturday. She said the baker had made it especially for me, since I wanted one, and he had used a fresh croissant. Be careful, the bread lady said, it's kind of falling apart because of the freshness of the croissant. And it was.

Actually, she had two croissants aux amandes in the van that morning, and I bought both of them. I thought Walt might want one. She charged me €1.25 apiece for them; a regular croissant au beurre costs €0.75.

Walt didn't want one, so I ate them both. I had heartburn for the rest of the day. They were good though, even if they were a little soggier and stickier than I would have liked. Damned fresh croissants!

Yesterday we got an Intermarché flyer in the mail, and one of the specials this week is a sack of 10 croissants au beurre for the amazing price of €1.50. That's 15 cents a croissant, and the ad says they are made with butter, not margarine. The ones made with margarine, which you hardly ever see any more, are called croissants ordinaires.

Last year I asked in a boulangerie whether they still made ordinary croissants. The woman behind the counter said no, there's no real call for them any more. Croissants are a luxury item, a special treat, so you might as well buy the ones made with butter, she said. I remember having croissants ordinaires in Paris back in the '70s.

How much do you pay for butter croissants (if you ever buy them)? The baker in our village charges 75 cents, as I said, and I think that's a fairly standard price out here in the country. I bet they charge more for them in Paris.

Since Intermarché has such a deal on 15-cent croissants (and I'm sure they are not as good as the ones made in bakeries), I decided to look up recipes for almond croissants on the Internet. Sure enough, here's one on the famous cooking blog called Chocolate & Zucchini that Clotilde Dusoulier writes. And sure enough, she uses day-old croissants to make hers.

"You will find croissants aux amandes in most traditional French bakeries," Clotilde writes. "Originally devised as a way to sell not-so-fresh croissants from the day before, they are simply croissants filled with almond cream, sprinkled with sliced almonds and baked again, until the cream has set and the elbows of the croissant have crisped up."

My next project is to make the rounds of the seven or eight boulangeries in the Saint-Aignan "metropolitan area" and buy a croissant aux amandes in each one to see who makes the best one locally. Then I'll have to start going on two or three walks a day with Callie to burn off all those calories. And I'll have to do it before our supply of Rolaids runs out.

I don't think I'll be making almond croissants anytime soon, however. Too dangerous.
Posted by Ken Broadhurst at 07:29