I re-ordered these posts so that they would read
chronologically from top to bottom.
Not much of a post this morning because Callie is sick and we can't figure out what's wrong with her. We had a sleepless night. The poor dog cries and whines and groans, and seems to be hurting.

Yesterday we kept a friend's dog and Callie and the other dog rough-housed for hours. As soon as our friend came to get her dog yesterday evening, Callie started moaning and groaning and then threw up on the living room floor. Okay, so she over-ate during the day, I thought, showing the other dog that she was dominant and could eat all the kibble. She did eat a lot more than usual.

But her discomfort obviously didn't stop there. We thought maybe Callie had hurt herself — twisted her leg or pulled a muscle, for example — because she was walking a little funny and she had to be coaxed to climb the stairs. She also kept trying desperately to lick her rear end, and whining and moaning at the same time, so we decided to look there and see if we could see anything wrong.

About 11:00 last night, we found what we thought was a tick on the poor dog's anus. We took that off, and she settled down for maybe half an hour. But then she started exhibiting the same symptoms again. This went on all night, in fits and starts. It's still going on. 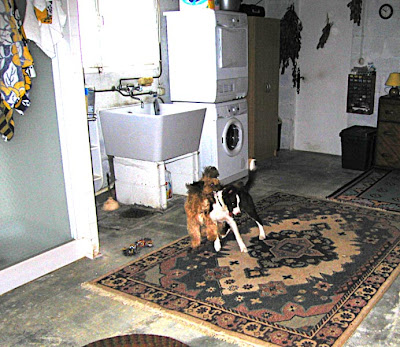 Callie and her dog buddy playing in the laundry room yesterday
This morning she went outdoors and peed, or at least squatted as if to pee, but she refused to go all the way out into the yard. I walked the whole perimeter hoping she might come with me, but she stayed close to the house and just watched me. She couldn't wait to get back inside, and when I let her in she just went and hid in a dark spot behind the water heater downstairs.

I just picked her up and carried her upstairs, and that obviously caused her some pain. And I just got her to drink a little bit of water. I think she's starting to shiver.

I also just called our vet's office and listened to a message that gave me the number to call for the vétérinaire de garde — the emergency vet service. I'm going to call and see if we can get an appointment, or at least some advice. She is still licking her back end compulsively, as if she has an irresistible itch or pain. And she's whimpering. I wish we knew what to do.
Posted by Ken Broadhurst at 08:00