Great weather for ducks ... and for duck

Today is June 15, and we've already had more rain in June than we had in all of April and May combined — almost twice as much. We've had more rain in the past two weeks than we had during the whole month of March, which is one of our rainier months here in Saint-Aignan. And to think that we complained that May was too damp and chilly. 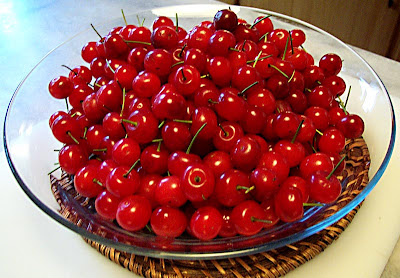 Sour cherries — griottes in French
Let me continue. We've had more rain in the past two weeks than in any whole month since I started keeping track of our rainfall in October 2004. Nous pataugeons, comme dirait l'autre. In June 2006 we had one-sixth as much rain in all of June as we have had in the first two weeks of June 2007. Is the picture becoming clear? If not, turn on your windshield wipers. 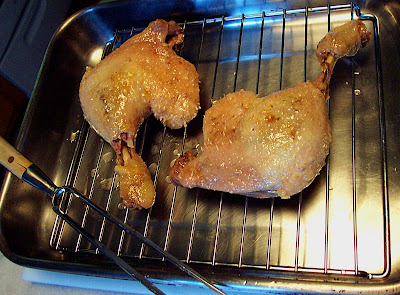 Cuisses de canard confites — cooked slowly for 90 minutes
in enough duck fat to cover them, and then drained on a rack
So it's great weather for ducks in Saint-Aignan. Or duck, which is the non-count noun form we use when we are talking about duck as a menu item. Duck with cherry sauce is what I'm talking about, using the last cherries we are likely to get off the famous tree out back, since we had more than an inch of rain just yesterday. 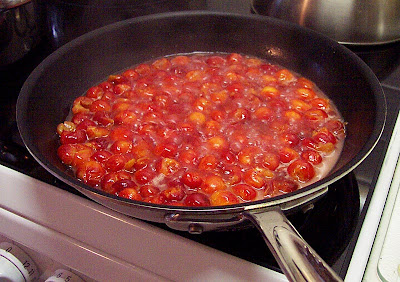 Cook the cherries and some cherry juice in a little
duck fat until they start to cook down and the juice thickens
Here's a translation of the recipe I got off the Lugar do Olhar Feliz blog I found a day or two ago:

Heat up the well-drained duck confit (heat it twice: first in a pan, and then on a rack in the oven). While it is heating up, pit the cherries and cook them in a pan [with some duck fat] until they just start to fall apart. Deglaze the pan with a small amount of (rice) vinegar, and then add in a cup of duck or veal stock. 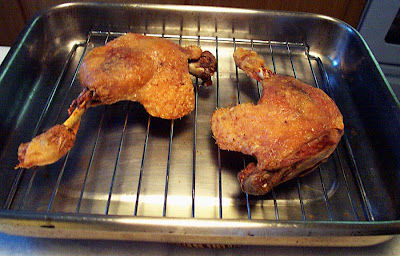 Put the cooked duck leg portions on a rack
and put them in the oven to turn golden brown
Let the cherry sauce cook down on low heat for about 10 minutes. Finish the sauce by adding three or four chopped stevia (a.k.a. sweetleaf) leaves (to sweeten it a little and add some green to the sauce and make it look nice). Then pour the sauce over the warm duck confit.

Confit done this way, like Calf's Liver with Cherries, is the essence of sweet and sour, which is perfect with duck. 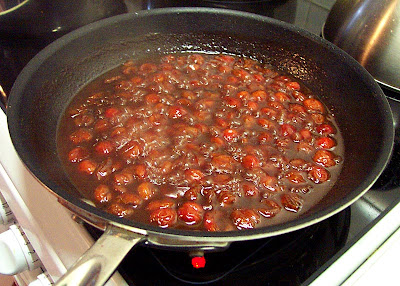 Add some balsamic vinegar, white wine, and
stock (duck, veal, or chicken) to the cherries and
let the sauce cook for 10 minutes to thicken up
Griottes — sour cherries — possess a delicious acidity that needs to be tempered by the addition of a little sugar, or some red-currant or red bell-pepper jelly....

Don't go overboard with the vinegar.

Since I had just finished cooking the confit in duck fat, I didn't need to heat it up in a pan. I took it out of the fat while it was still hot and put it on a rack in an oven pan to drain for 10 minutes. Then I put the pan into a hot oven until the duck pieces had taken on a nice golden color. The skin was crispy. 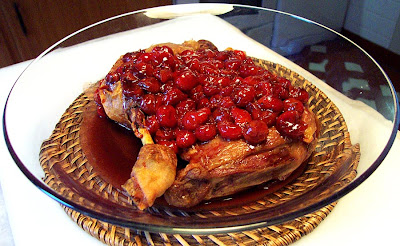 Pour the thickened sauce and cherries over the duck confit
I used two cups of pitted cherries, and I cooked them according to the recipe, but I decided to use balsamic vinegar instead of rice vinegar. I also added a dash of white wine for sweetness. I had veal stock, but chicken stock would have worked just as well, and I didn't have any sweetleaf (I'd never even heard of it before) so I did without. I also didn't add any sugar or jelly. The sauce was plenty sweet because the balsamic vinegar brings a lot of sweetness. And of course I had put in some white wine. I almost always do, you know. 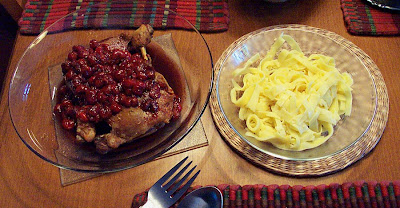 And after all that we had a cherry clafoutis [klah-foo-TEE] that Walt made for dessert. We ate all the duck but we have clafoutis left for the next couple of days. 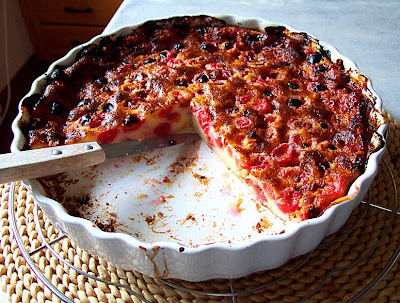