Here in Saint-Aignan the sun will rise today at 8:23 a.m. It will set this afternoon: 5:05 p.m. Obviously, the sun is working a 9 to 5 shift, with little or no overtime. Be that as it may, yesterday was a beautiful sunny day.


Walt and I went out for a drive. Unfortunately we picked the wrong road. To go south from here down to Orbigny and on to Montrésor, there are two routes. One is a moderately wide two-lane road with a stripe down the center, keeping northbound cars on one side of the pavement and southbound cars on the other. In theory. That was the road not taken. 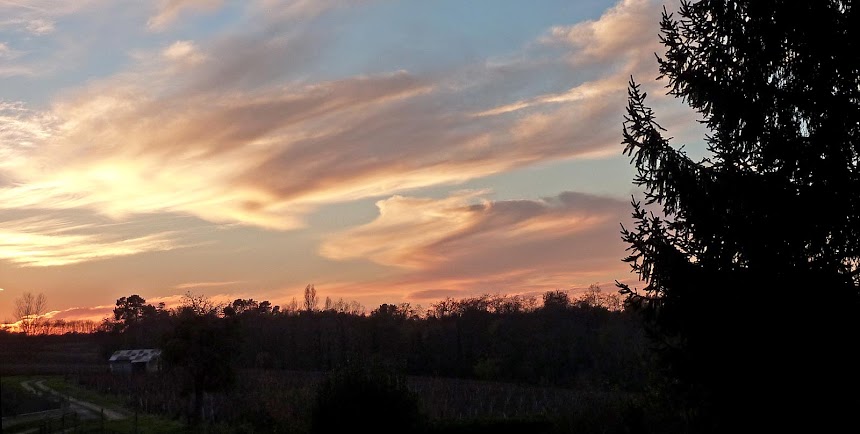 Above and farther down in this post, two photos of yesterday's 5 p.m. sunset over the vineyard


Instead, we took the narrower road just a mile or so to the west. It's not really wide enough for two cars to be able to pass each other without driving off the pavement. There are a few blind curves along the 5 or 6 mile route, which passes through woods for a ways and then through pretty farm country. It's more scenic than the wider road.


As we came around a gentle curve in a wooded area, we saw a big-rig truck pulled off to the left side of the road. Well, the first thing we had noticed was several very tall piles of cut logs along the right-hand side. There was the truck, and it had left cars just barely enough space to get by it. We had to drive with our right wheels off the pavement and in a muddy rut very close to a deep ditch of that side of the road. But we made it.


We rounded another bend and, surprise, there was another truck parked the same way. It had left even less space for a car to get around it and continue toward Orbigny. Worse than that, just ahead of it was a truck parked more or less in the center of the road, with a crew working around it. The men were loading logs onto the trailer of the big rig using a big crane-like thing with a chain hanging off it to wrap around bundles of wood.


We sat and waited. One member of the crew acknowledged our presence with a dismissive wave of the hand. We pondered our situation. We lamented that there had been no sign or other warning that the road was blocked. Finally, we decided to try to turn the car around and drive back toward Saint-Aignan. Walt called it a 10-point turn. I got out of the car and guided him as he maneuvered the car back and forth across the roadway so that he wouldn't end up with wheels in a ditch, of which there was one on each side of the narrow lane. 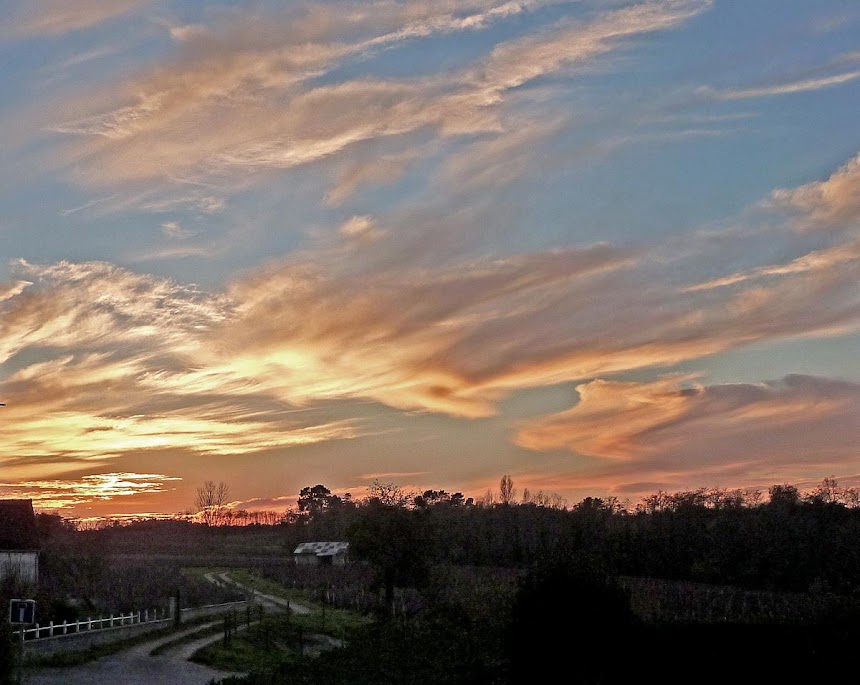 Well, we made it. It's always an adventure when you take to country roads around here. Tractors, harvesters, RVs, motor homes, tour buses, cows, deer, and yes, big-rig trucks are out there. There's not much car traffic, but the roads are still an obstacle course.
Posted by Ken Broadhurst at 07:15