The darkness of December... These are the times when it's hard for me to take photos on my early morning and late afternoon walks with Callie. So I've been going back into my archives to see what images I have from all the different months of December since we've lived here. It's been nearly 13 years now.

For example, above is a view of the vineyards about a mile out behind our house. The photo's time stamp says it was taken on December 10, 2005, at 4:17 p.m. I like the golden color that the vineyards were displaying that year in December. I remember that 2005 had given us a summer at least as nice as the very warm, dry summer we had in 2015. 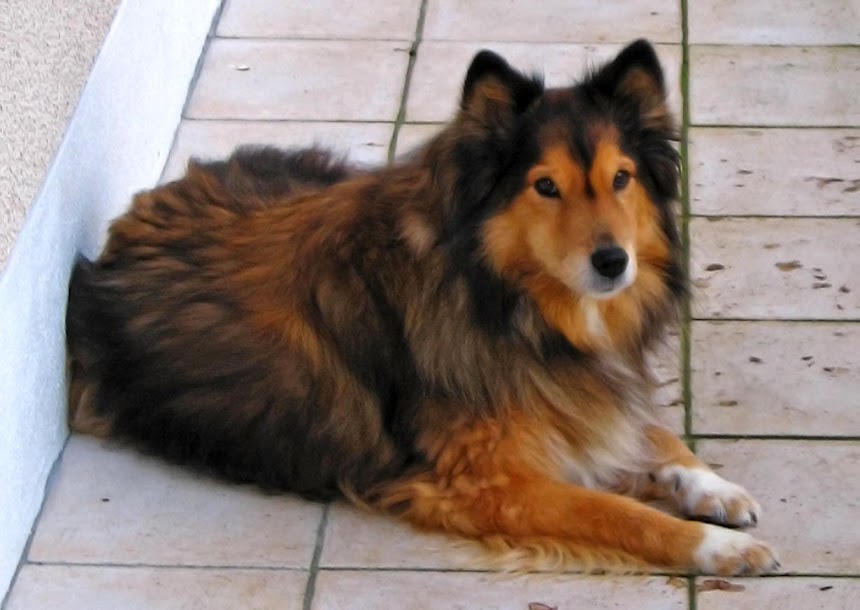 Going back into old photos also reminded me that the dog named Collette who came to France with us all those years ago was near the end of her life in December 2005, but we didn't know it yet. She had certainly already slowed down and was clearly a senior canine at age 14. She was active and beautiful right up to the end. She passed away in March 2006, victim of a stroke, and we brought Callie into the household in May 2007.

And then I noticed this photo of our back yard and what was left of the vegetable garden that year. It looks pretty similar to the scene out there in 2015. And guess what — that's a little collard patch in the 2005 garden. I think that was my first try at growing collard greens in France, and it was a great success. Some things just don't change. One of our main reasons for moving to this region and into this house was that we'd be able to have a big vegetable garden.
Posted by Ken Broadhurst at 07:30