I went down into the village for a haircut yesterday morning. Amélie had given me an 8 a.m. appointment. Walt had had his haircut a couple of days earlier, and when he got home he said the village was sporting some nice holiday lights and decorations.


I took my camera with me when I drove into the village center around 7:45. It was still dark so the photos aren't great. The weather here continues to be weirdly mild. I guess that big mass of warm air that was located over the eastern U.S. has made it's way across the Atlantic Ocean, following the Gulf Stream. It's over 11ºC this morning (low 50s), and yesterday's high temperature was 16ºC (low 60s). In Fahrenheit, that's nearly 20 degrees warmer than normal. 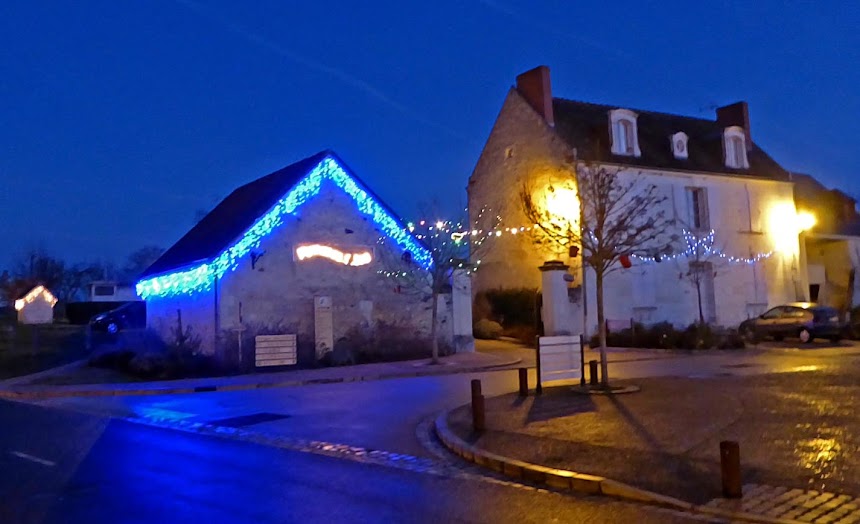 Amélie is the young woman who took over the salon de coiffure in the village when Mme Barbier finally threw in the towel 2 or 3 years ago. It was fun having a barber named "Mrs. Barber" and she was a very good barber, but she moved on. I've heard that she quit the business because she developed allergies to the chemicals a coiffeuse has to work with everyday. She apparently found a job at the local zoo, the Zooparc de Beauval. Good for her.

Another recent event has been the shutting down of the Garage Danger in Saint-Aignan. That's where I bought our little Peugeot 206 back in the summer 2003. The owner's name was Thierry Danger [dawn-ZHAY] (and still is I hope). The car has Garage Danger written on the hatch lid. It looks more like some kind of warning message than a car dealer's name. Now the Citroën dealer across the river in Noyers-sur-Cher is selling new Peugeots alongside his line of new and used Citroëns. The two car brands are made by the same company anyway.

Oh, and our dentist that we really liked, Dr. Christian Bigot [bee-GOH], retired a few years ago too. Plus ça change...
Posted by Ken Broadhurst at 07:30