Here are a few more pictures I took at the Saturday morning market in Saint-Aignan day before yesterday. It was a gray morning, but not nearly as foggy as yesterday, when thick fog stayed on the ground all day long. In the photo below, you can see Walt standing in line in the next-to-last position. 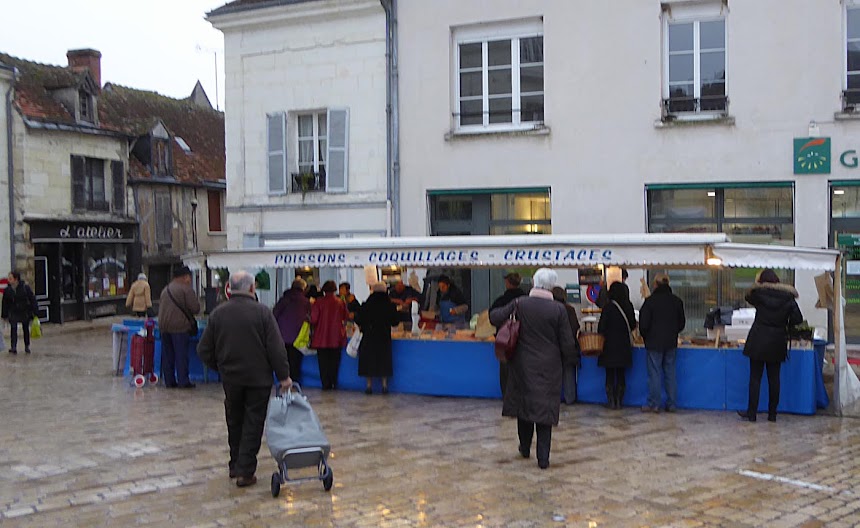 I was surprised that the market wasn't more crowded, this close to Christmas, but we were there early. Maybe more shoppers showed up later in the morning. Usually, the line at the seafood vendor's stall is much longer. 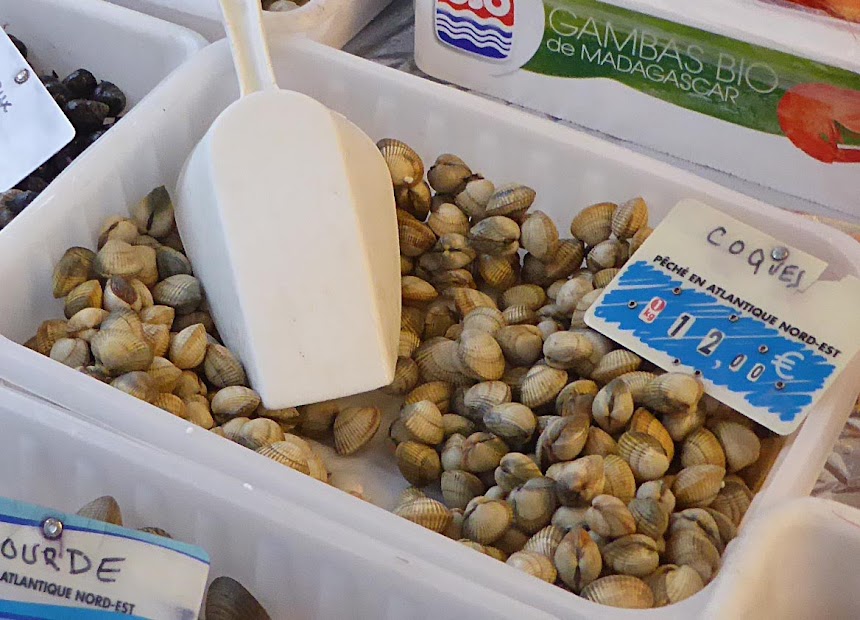 What we went to the market to buy was coques, or cockles (above). These are tiny ones, but they are delicious cooked in olive oil and white wine with onion, garlic, and fresh herbs, in the style of linguine with white clam sauce. The most important step in preparing the bivalves is to put them, live, into a bowl of cold salted water (30 grams per liter) for an hour or two to purge them of sand. Putting in a tablespoon or two of raw wheat semolina or corn meal helps. The cockles (or clams) ingest the semolina or meal and excrete any sand that might be in their digestive tract. 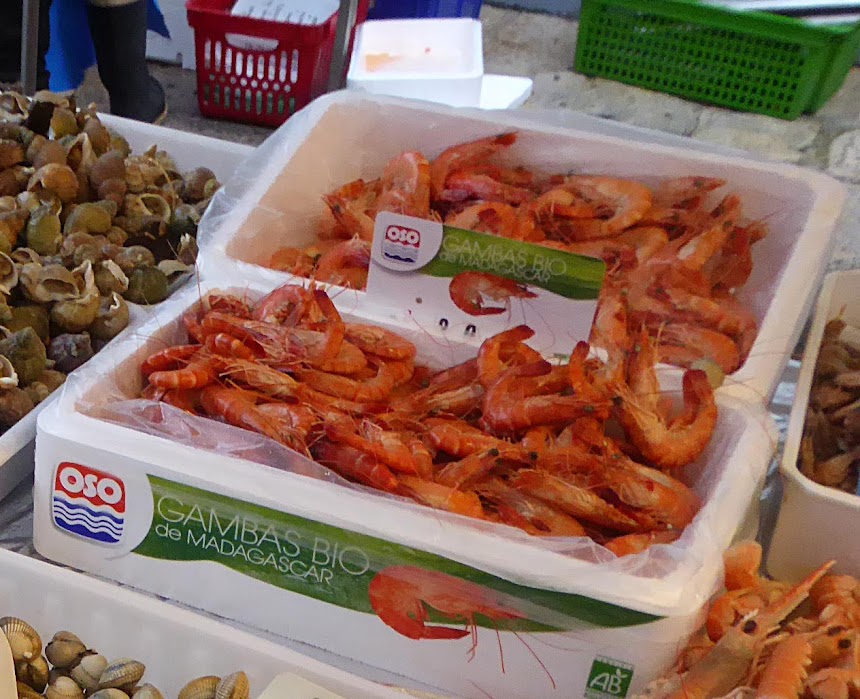 Above are some more of the shrimp (or prawns, if you prefer the term) that were on sale Saturday morning. Again they are sold already cooked. These are organically raised gambas from the island of Madagascar in the Indian Ocean. I couldn't see the price, but I bet they weren't giving them away. 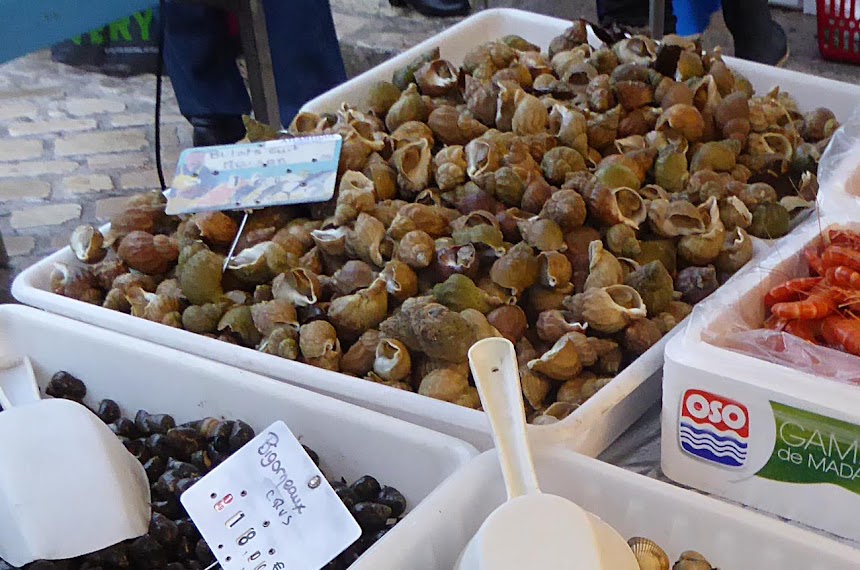 Bulots (above) are little sea snails, like whelks or conchs, that are sold cooked as well. People eat them cold with mayonnaise, pulling them out of their shells with little forks. They are slightly rubbery, but I like them. You usually see them, along with oysters, shrimp, crab, and other shellfish on seafood platters — plateaux de fruits de mer — in France, along with the even smaller gastropods called bigorneaux, visible at the bottom of the photo above. 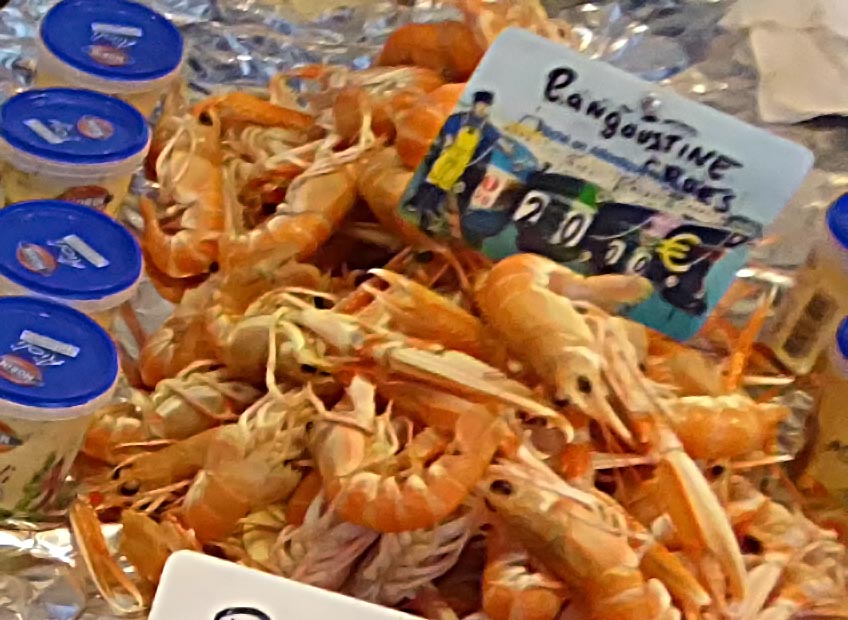 Sorry for the blurry picture above, but it was the best I could do. These are langoustines, sold raw rather than cooked. They have a harder shell than shrimp or prawns, making them more like tiny lobsters. In the British Isles, they are nonetheless known as Dublin Bay prawns, and in other countries they're called by the Italian term scampi. By the way, the English word "shellfish" includes what in French are called both coquillages and crustacés. 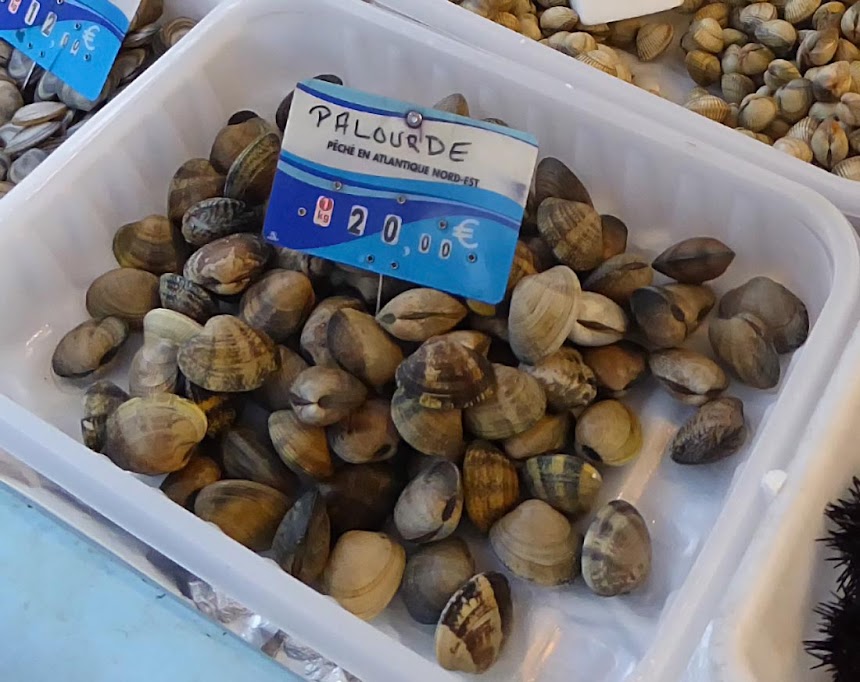 Finally, here are some clams. They're called palourdes in French. Similar mollusks are called praires, and then there are amandes ("almonds" a.k.a. dog clams), cockles, and lavagnons, a specialty down around the Ile d'Oléron. Most of the common names of such bivalves are ambiguous, being applied to various species regionally or for culinary purposes.
Posted by Ken Broadhurst at 07:30