Tree-cutting bandits, and a cake

Yesterday morning we were in the living room, enjoying views out the windows. Skies were blue and there was no wind. It wasn't exactly what you would call warm outside, but it was much less cold than we expect at Christmas.


Walt noticed a big white van drive up the road. He went to a back window and saw it turn right behind our hedge and drive down the tractor path behind our back gate.

It stopped. Two men got out. They walked along our side fence, where we keep a strip of land three or four feet wide cut and mowed so that brambles and weeds won't grow into the fence and damage it. The two men were carrying small chainsaws.


We watched, wondering what was going on. The men got to the end of our fence and then pushed their way into the woods, moving away from us. Then they chose a tree and cut it down. It was probably one of the ones in the photo to the right, but not the one in the center. We saw the cut tree fall.


Then, a minute or two later, Walt said he saw the white van leave. Now what was that all about? One little tree? Maybe it was dead and they needed firewood. Later in the day, Walt went out and looked. He said the tree has been cut into logs, but the logs are just lying on the ground willy-nilly, not stacked. Somebody does own that strip of wooded land, so it's really none of our business. Just a mystery. 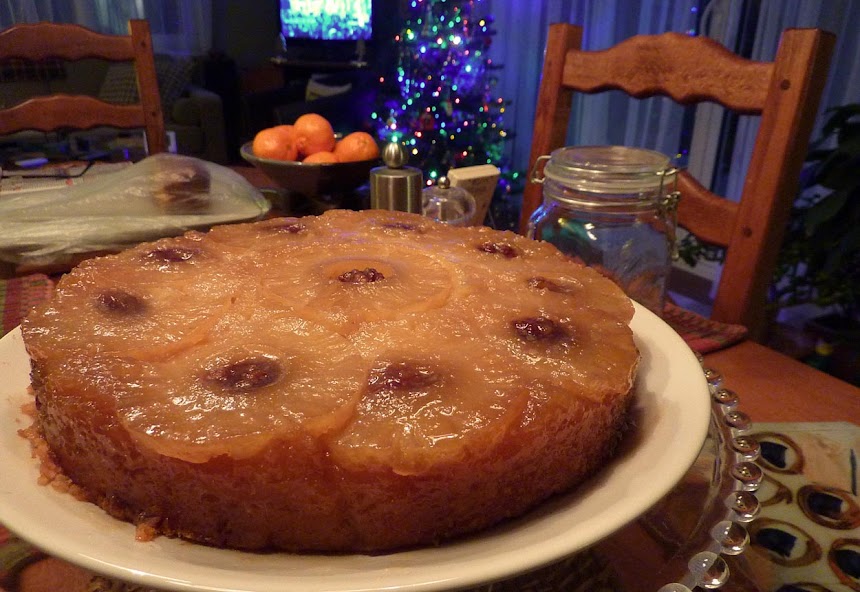 Above is the pineapple upside-down cake that Walt made for us for Christmas. Those are walnuts in the holes of the pineapple slices. The pineapple was sweet and caramelized. The cake itself was tender and rich, even though Walt reduced the amount of sugar and egg that he put in the batter. I wonder if such upside-down cakes were inspired by the French tarte Tatin — or vice-versa.
Posted by Ken Broadhurst at 07:30