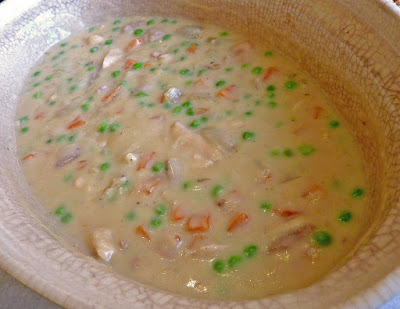 So we made the chicken pot pie yesterday, and it was pretty good. We had gravy left from Saturday, and we still had plenty of turkey — half the bird, or nearly. I put diced carrots, chopped onion, and frozen green peas along with some of the white and dark turkey meat cut into chunks.


Jacques Pépin's method for béchamel sauce was the basis for the gravy, except that I substituted turkey poaching broth with some crème fraîche added for the milk Pépin uses.

I think this is called just a "chicken pie" or "meat pie" in countries other than the U.S., where "pot" pies are a kitchen standard. 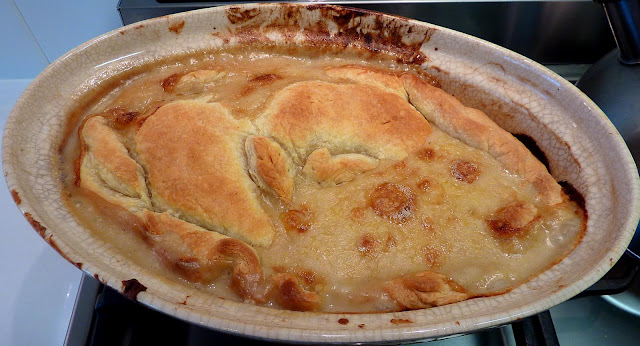 The gravy is 100 grams of butter (6 Tbsp.) melted in a saucepan and then 6 Tbsp. of flour added to cook in the butter. Pour half a liter of liquid into the butter-flour mixture all at once and stir energetically with a whisk as it come to the boil. The liquid can be milk or broth, or broth with cream added. That's what I did. Adjust the salt and pepper accordingly.


Walt had some of his good shortcrust (aka regular pie crust or pâte brisée) waiting in the freezer, so he took it out the day before to thaw in the fridge. Yesterday he rolled it out and laid it on top of the cooled pot pie filling. The pie baked in the oven at 350ºF (180ºC) for about half an hour, and then sat and cooled for 10 minutes before we spooned out our servings at the table for lunch. We had romaine lettuce with a Caesar-type dressing as our salad. 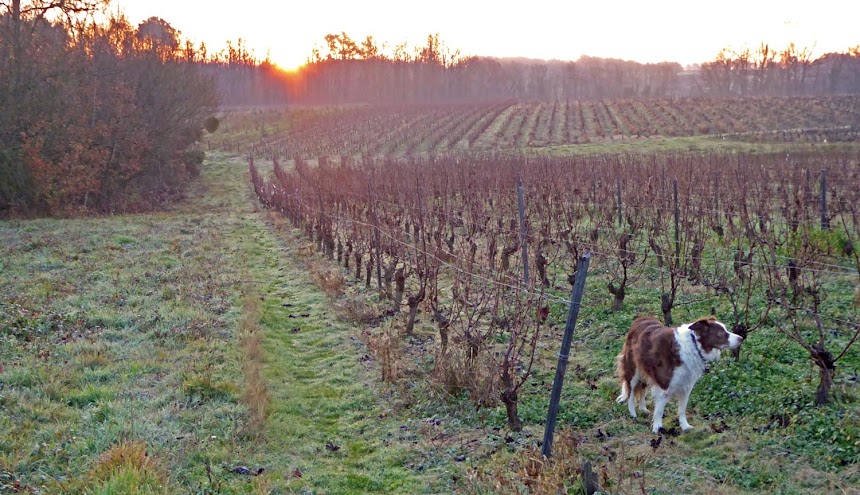 Yesterday morning I took a camera out on my walk with Callie. The temperature on our thermometer at the house was well above freezing, but out in the vineyard there was a light frost. That was the first time in a while. The sun was just coming up at 8:45 a.m. Today the early morning temperature is back up to nearly 50ºF (9.5ºC or so). I think it might be raining lightly. 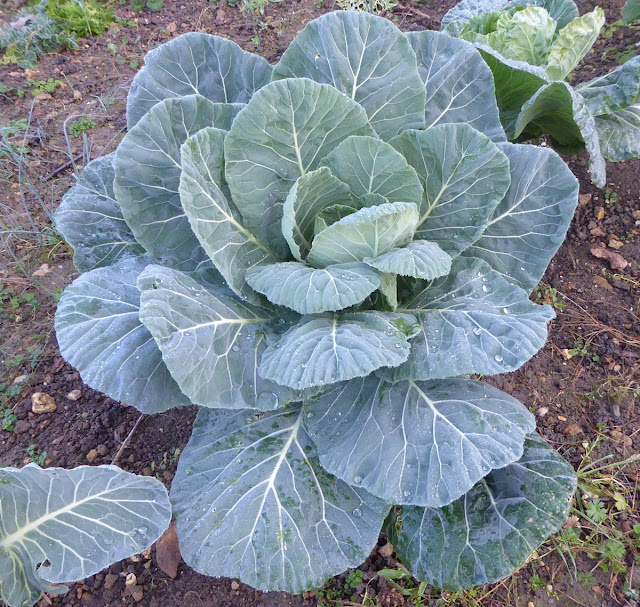 The recent mild weather, with just the right amount of rain, has been very kind to my collard greens. Above is the biggest plant, and you can see how it is thriving. Predictions I just heard on Télématin promise us more normal winter temperatures starting the first week of the new year. I'll have to keep an eye on the collards and maybe pull the plants out if it looks like we're going to have a really hard freeze.
Posted by Ken Broadhurst at 07:00