Cépage in French means grape variety. I've been here in the Loire Valley for more than 10 years now, but I learn something new about the local grapes every month.


The part of Touraine where Saint-Aignan is located is the Vallée du Cher, the local river that is a tributary of the Loire. The wine production areas along the Cher River are now in what has been dubbed the Touraine-Chenoceau appellation. The main grapes grown here are Sauvignon Blanc, Gamay Noir, Côt (a.k.a Malbec), and Cabernet Franc.


Just north of Saint-Aignan, south of Blois, is a different wine district called Cheverny. It's centered on the town and château of Cheverny. I knew of its existence, and we've had Cheverny wines in restaurants, though we had never been up that way to buy wine for home consumption until last week. I thought that Cheverny wines were made with the same grapes, basically, that are grown around Saint-Aignan. 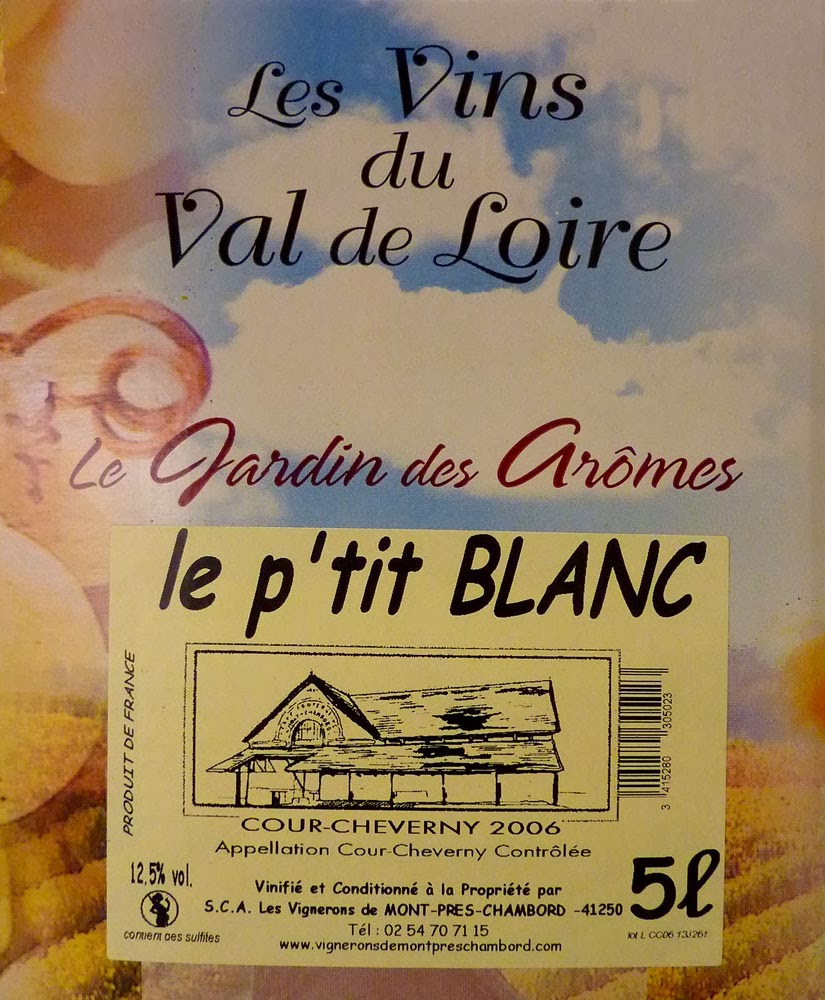 And they are, with one exception. There is a separate wine district, sort of embedded in the Cheverny appellation, called Cour-Cheverny (which is another village in the area). All the wines that carry the AOC Cour-Cheverny are made with a grape varietal called Romorantin, named after the largest town in the Sologne region. Saint-Aignan is on the southwest edge of Sologne and on the eastern edge of the old province called Touraine.


The Romorantin grape is used to produce white wines in the Sologne. The grape has an interesting history. It seems that the Renaissance king François 1er, who had a residence at Romo (as it's called locally) in addition to his residence at the Château at Blois (among others), ordered 80,000 grape plants from Burgundy in 1519, about the time he started construction of the grandiose Château de Chambord.


The grapes he had brought in and planted in the Sologne came to be known as the Romorantin cépage. Recent DNA testing has shown that Romorantin is a hybrid of Pinot grapes and another varietal called Gouais Blanc, which is not well known or even well regarded in France. (I think Gouais is grown more in Germany).


The Romorantin hybrid is not very well known either. Apparently, it used to be grown more widely around the Loire Valley, but nowadays there are very few vineyards (about 150 acres in all) planted in Romorantin, nearly all in the Sologne. In fact, one local grape-grower and wine-maker claims that he has the oldest vines in France on his property just a few miles northeast of Saint-Aignan. They were planted in 1850, and they somehow survived the phylloxera epidemic that devastated most of the vineyards in France and other parts of the world in the late 19th century.


There is a lot of information about the Romorantin grape and the Cour-Cheverny appellation on the Internet. I don't know why I had never researched it before. Oh, and I bought a bag-in-box of white Romorantin wine called the P'tit Blanc at the wine co-op at Mont-près-Chambord last week. Note that it is a 2006 vintage, which makes it pretty old compared to most Loire Valley wines. They sell it for about 2.20 euros per liter.


I have to say it's very good. It reminds me of Chardonnay. I particularly like French Chardonnay wines like Chablis and Mâcon, not to mention Blanc de Blancs Champagne wines, which are 100% Chardonnay. Now I know I like the Romorantin P'tit Blanc too. I foresee more trips to the Mont-près-Chambord wine cooperative in my future.
Posted by Ken Broadhurst at 07:30