We didn't eat all the saucisses de Strasbourg with the sauerkraut, and we thought we might like to make hotdogs one day soon. We had four different kinds of pickles in the fridge — two kinds that we made and two that we bought at the supermarket. I thought it would be good to have U.S.-style pickle relish with the dogs. So I set about making pickle relish. You can't buy it here. 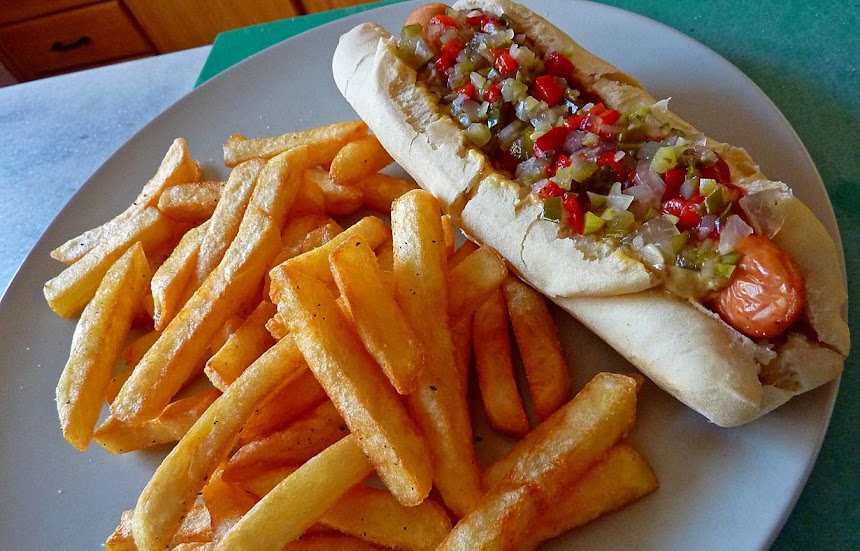 You just have to chop up some pickles and onion very finely, and optionally some red bell pepper. Then make a vinegar sauce to complete the relish. I read a recipe on the web that said the thing to do is to boil some vinegar down with spices like coriander seeds, mustard seeds, and dill. Well, I had plenty of seasoned vinegar right in the pickle jars in the fridge, so I boiled down a cup or so of that until the liquid started to get a little syrupy. I strained it as I poured it over the chopped pickles.

Then we needed buns, and we didn't have any. So you just make some. We've made hamburger and hotdog buns before, because we think the ones we make are a lot better than the ones you can buy at the supermarket. We have a really good recipe that we found on the Internet. If you are in the U.S., you probably won't ever make your own hamburger or hotdog buns, but I'll give you the recipe anyway. See below.


We ate our hotdogs with pickle relish, Dijon mustard, and ketchup. I also like them with mayonnaise and pickle relish, so I dressed one of mine that way. I think Walt just had relish and mustard on his, sans ketchup. We were pleased with the result. We each ate two hotdogs, with French fries.


Do you know the French word for 'hotdog'? It's hot-dog. It sounds more like [uht-duhg] that it does like the U.S. pronunciation. French has no pronounced H sound, for one thing, and the O vowel is different. The initial H of hot-dog is treated as an H aspiré, which means that in the plural, des hot-dog(s) — the final S is optional and silent — the S of des is not pronounced either. It's [day-uht-duhg]. That's the American [uh] sound, not the British, by the way.


Un hot-dog (don't pronounce the N) in France is often served with melted Swiss cheese on it. It's good, but not the same thing as an American hotdog with relish and mustard. One of the best hotdogs I ever had was in 1970 in Aix-en-Provence, though, when I was a starving student. It was a saucisse de Francfort served on a piece of tender baguette with melted butter. Nothing else. I bought it from a street vendor at the market and I still remember how good and minimalistic it was. 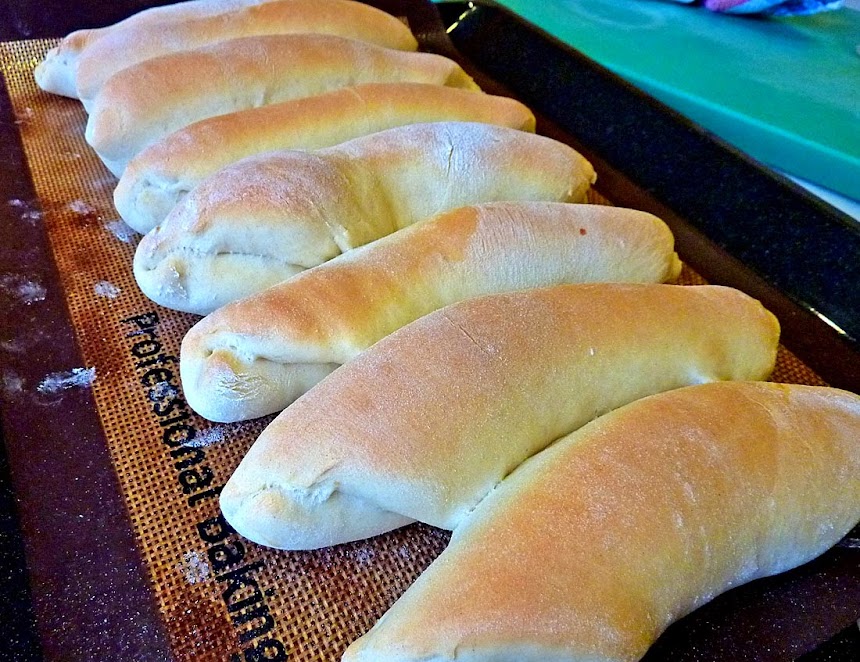 In a large bowl, mix together 1 scant cup flour, yeast, sugar and salt. Mix milk mixture into flour mixture, and then mix in the egg. Stir in the remaining flour, half a cup at a time, beating well after each addition. When the dough has pulled together, turn it out onto a lightly floured surface, and knead until smooth and elastic, about 8 minutes.

For hamburgers, divide dough into 6 equal pieces. Shape into smooth balls, and place on an oiled baking sheet (or silpat, or parchment paper). Flatten slightly. Cover, and let rise for 30 to 35 minutes.

For hotdog buns, shape each piece into a 6x4 inch rectangle. Starting with the longer side, roll up tightly, and pinch edges and ends to seal. Let rise about 20 to 25 minutes. Bake as above. These buns are pretty big. I usually make 8 instead of 6.