Apples and black pudding baked in a pie

Okay, how about this as a lunchtime treat: tarte aux pommes et au boudin noir. An apple tart with black pudding, which is the English translation of boudin noir. In America, I think we would call it blood sausage. (Pudding is a funny word, with completely different meanings in some dialects of English compared to what it means in others.)


We made this very French specialty (look at all these recipes) for lunch on Sunday. You might think we are trying too hard to find recipes to use up all our surplus apples. But actually, it was really delicious. Walt and I both enjoy boudin noir — we're going to have it for lunch another day later this week. Across the Channel, black pudding is often part of what they call a full English breakfast, but in France it a lunch- or dinnertime food. 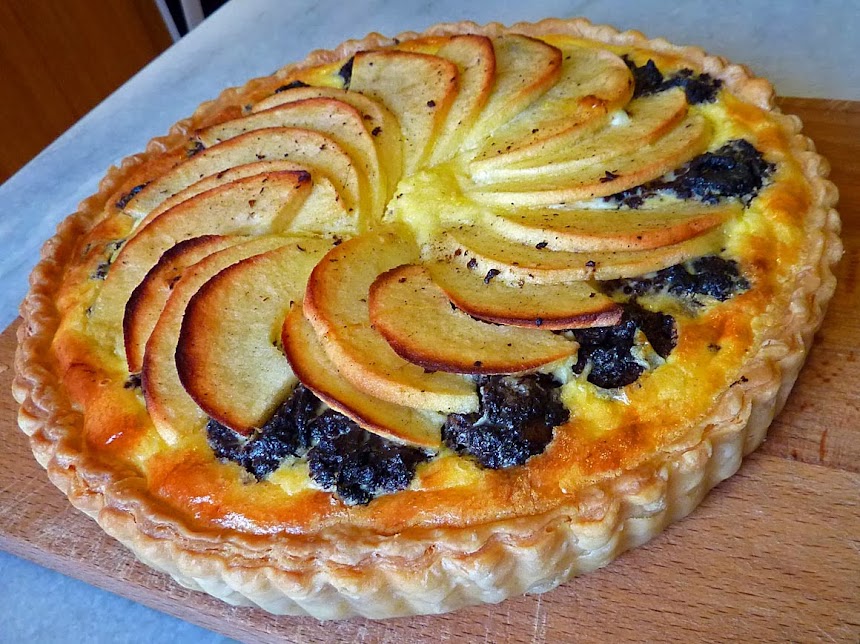 
This is a savory, unsweetened apple tart. It has a little cinnamon and nutmeg in it, but no added sugar. The apples are sweet enough the way they are. What you do is core, peel, and finely dice up an apple or two, depending on the size of the tart you are making. Cook the diced apple for a few minutes in butter in a frying pan, adding a pinch or two of cinnamon (to taste). You want the apple pre-cooked, but not necessarily made into apple sauce. (Of course, you could also use apple sauce for this, if you wanted to.) 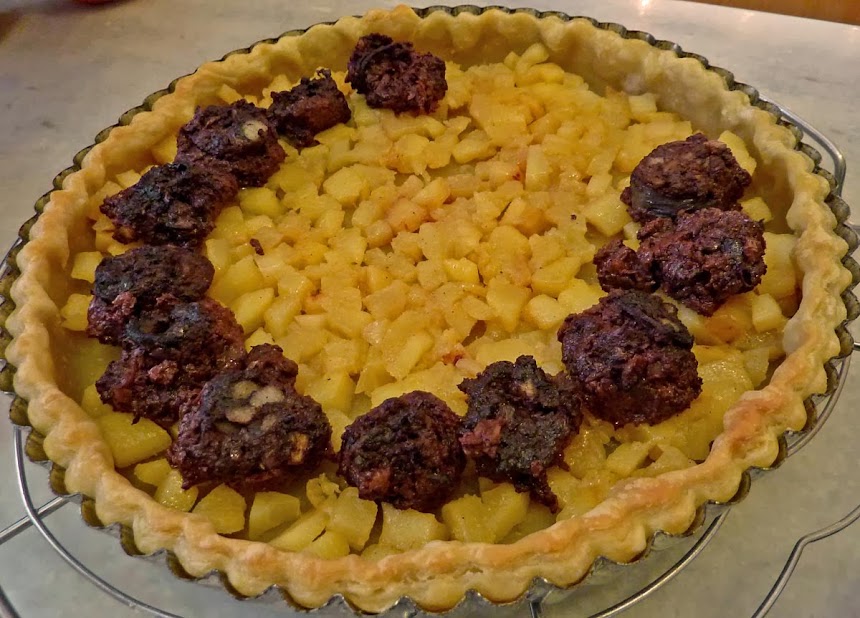 Sausage pieces being arranged on a bed of diced apple (or apple sauce).


Meanwhile, pre-bake a pie crust in a medium oven. Also, cut a piece of black pudding into slices 1 or 2 cm (½ inch or so) thick. Quickly brown the sausage slices on both sides in a little butter — I did them in the pan that the diced apple cooked in after it was done. Be careful, because the slices of sausage are fairly delicate and might start to melt or fall apart as they heat up. It doesn't much matter. And don't worry about the degree of doneness — the blood sausage you buy at the charcuterie or supermarket is sold already cooked. It just needs to be heated up. 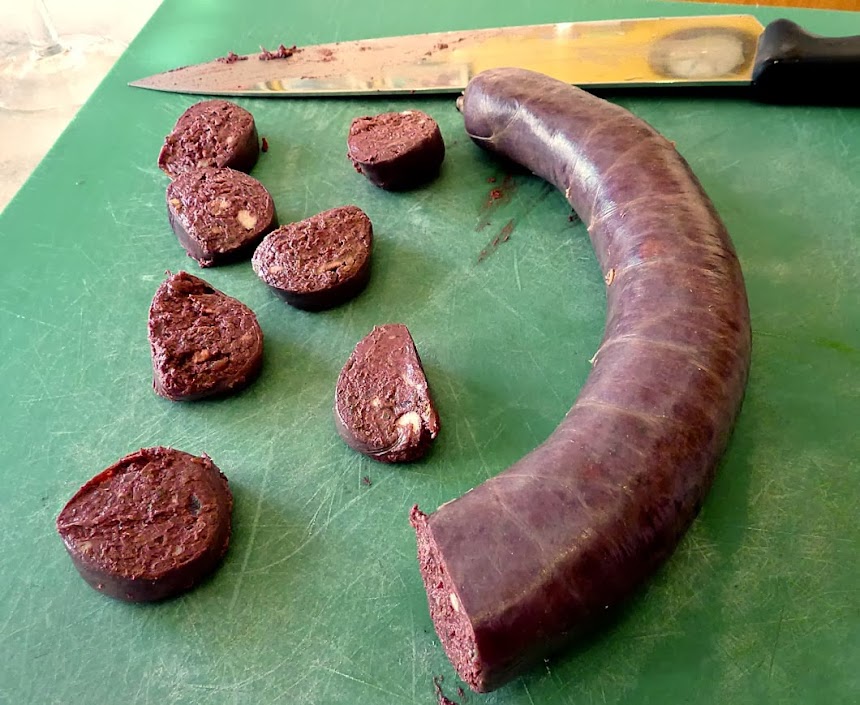 Boudin noir is cooked when you buy it.


Separately, mix together two or three eggs with 20 to 30 cl of cream — the quantity of cream and number of eggs depends entirely on the size of the tart you are making. Grate in a little pinch of nutmeg if you want, and season the cream mixture with salt and pepper. 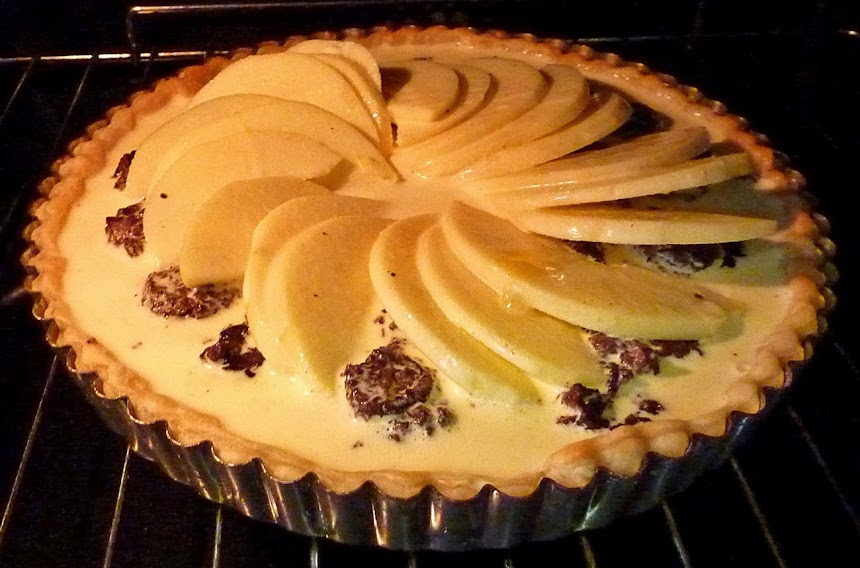 The tart is in the oven.


Spread the cooked diced apple in the bottom of the pre-baked pie crust. Arrange slices of sausage over the top. Core, peel, and slice another apple or two. Arrange the apple slices on top of the sausage. Carefully pour the cream and egg mixture over all, so that it fairly covers the sausage but not necessarily all the slices of apple.


Bake the tart in a 180ºC / 350ºF oven for 30 minutes or longer until the liquid has set and the apple slices are starting to brown. Brush the apple slices with a little bit of melted butter if you want. 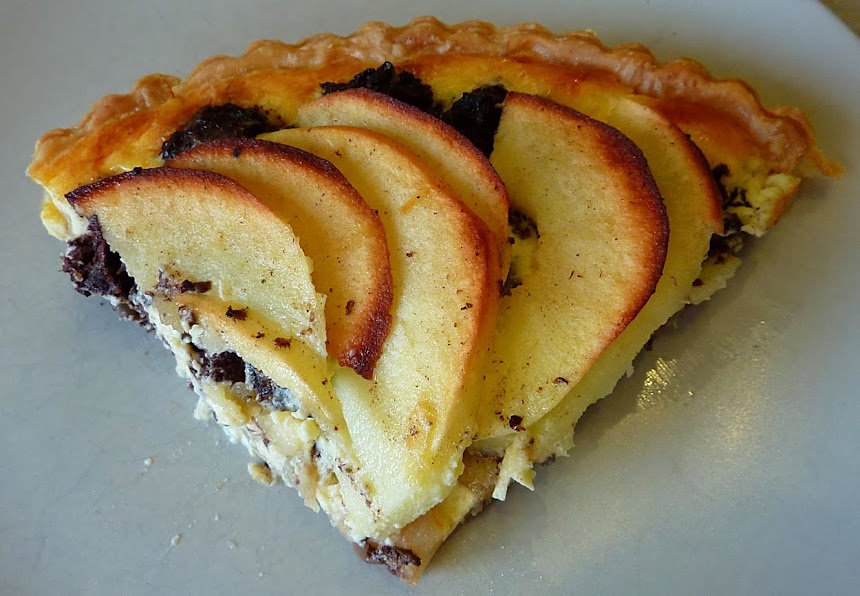 
Black pudding is made with pork blood and fat, and you know that apples go well with pork. I've also seen recipes for this kind of tart using boudin blanc, and I'm going to try that soon. Serve the tart as an appetizer or, with a green salad, as a light lunch.
Posted by Ken Broadhurst at 07:30