This weekend we enjoyed a get-together with a Belgian couple who we had the pleasure of meeting for the first time in 2010. That year, they came to the Loire Valley for a vacation with our blogger friend Martine "Ladybird." JL and B are from Brussels and are French-speaking. They've bought a holiday home in a neighboring village, not far from Saint-Aignan. 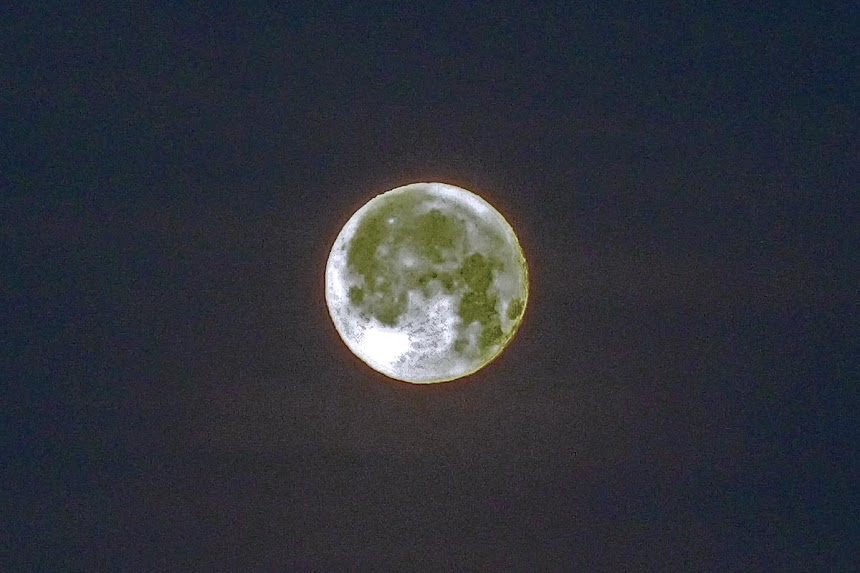 You know how they used to say the moon was made out of green cheese?
JL and B said they've been making monthly trips from Brussels to Saint-Aignan for a while now, staying just a few days each time. Martine had told us last summer that they'd bought a house here. They're gradually bringing down furniture and other furnishings. The house is in the middle of a  village, but with a big back yard where they can have a vegetable garden one day. 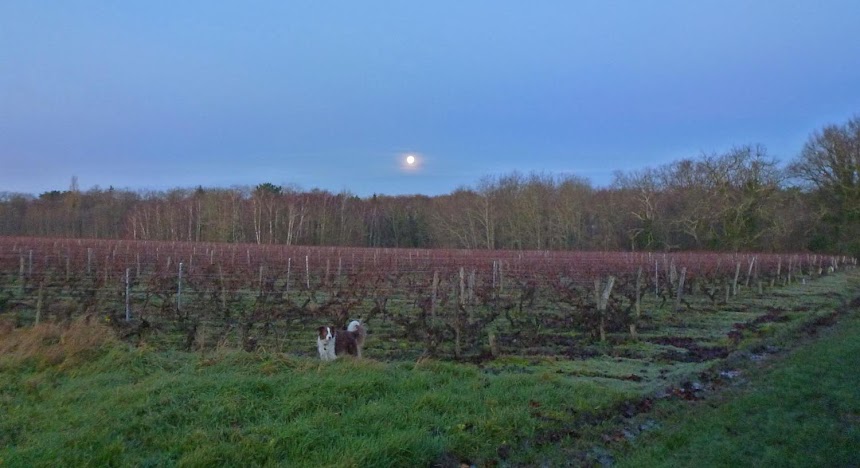 This was last Friday at about 8:30 a.m. Callie was glad to be outside —
she loves to bark at the morning moon.
The way they got in touch was by coming over and ringing our front bell on Saturday. We were busy in the kitchen. I looked out the window and was two people I didn't recognize standing outside the gate. It's unusual to have two people — a man and a woman — arrive unannounced like that. Usually when somebody you don't know comes to the gate it's a contractor of some kind selling services like tree-trimming or painting or window replacement.

Sunrise behind poplars last Friday morning
My first thought, when I saw JL and B — I didn't immediately recognize them — was that they too must be selling something. I didn't bother to go downstairs — I just went out on the front deck, from where I could speak to them down below. It dawned on me that they might be Jehovah's Witnesses, because we've had couples ring the bell in the past and want to talk to us about religion. I was too busy for that kind of discussion.

Looking across the vines toward our hamlet at sunrise
JL asked in French if we remembered them, and I was sort of confused. Then he said the magic word — Martine — and I knew immediately who they were. I remembered their names. We talked for just a minute. I told them we were busy in the kitchen. They said they didn't want to bother us but asked if we could come over the next day to see their house and share a glass of sparkling wine.

Sunrise doesn't come very early in this season
So that's what we did yesterday at noon. I'm glad JL and B got in touch. They'll be good neighbors (about 5 miles down the road). We spent a couple of hours looking around their French house and getting better acquainted. Thanks, Martine...
Posted by Ken Broadhurst at 08:00