We didn't make these. We just bought them off the drive-up butcher truck. All we had to do was figure out a way to re-heat them. We did, and they were delicious.


The green stuff in each shell is, of course, "snail butter" — beurre à la bourguignonne or beurre pour escargots dits à la bourguignonne is what the Larousse Gastronomique calls it. It's a beurre composé made with chopped parsley and garlic, and again according to the LG, a good bit of diced shallot. 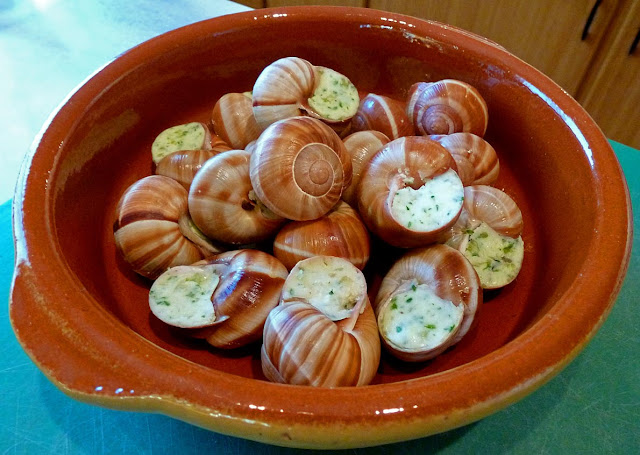 Snails fattened, purged, cooked, and stuffed back into their shells
with plenty of parsley-garlic butter


We in the English-speaking world smile slyly or even chuckle about crazy French people who eat... ewwwh!... snails. But the LG says it was the ancient Romans who figured out how to fatten and prepare them to make them edible. Blame (or credit) goes to a man named Fluvius Lupinus. Of course, snails were also a part of the diet of prehistoric peoples.


Snails gathered in the wild have to be purged and fattened so that they are safe to eat. That's because the snails might have eaten plants that are toxic to the human digestive system, and they can also have sand and grit in their digestive tract. So they spend two or three days in a controlled environment, first fasting and then feasting on aromatic herbs, flour, bread crumbs, and/or corn meal, to clean out their systems. That diet also fattens them up. 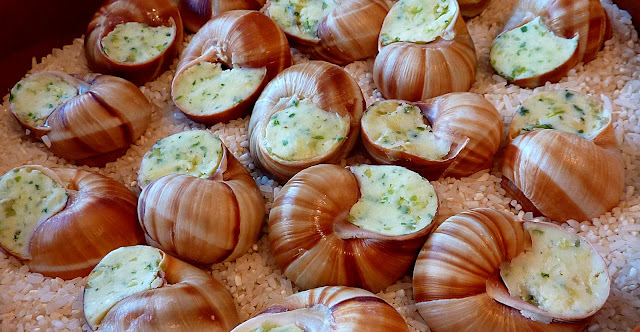 Snails, beautiful snails (at least the shells are beautiful)


Snail meat is not very nourishing, according to the LG, but it contains a lot of vitamin C, calcium, and magnesium, along with other minerals. It's the "vineyard snail" — l'escargot des vignes — that is considered the best. It's also called l'escargot de Bourgogne. I think that's what we bought, not the smaller, darker-shelled snail called le petit gris, which is also delectable. 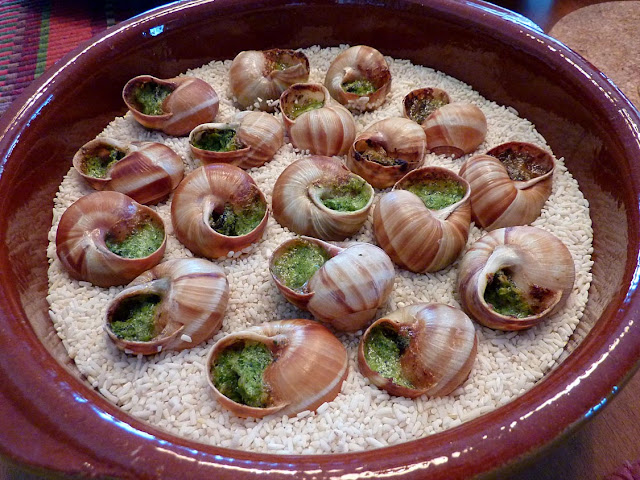 Here they are re-heated and ready to eat.


We don't have the special snail dishes you need to hold the snails upright as they cook in the oven — you don't want all the parsley-garlic butter to run out of the shells — so we improvised. We put a layer of rice in a dish and pressed the shells down into it. It worked just fine. Then we just heated the snails up in the oven for 15 minutes. As I said, they were delicious. It's the butter, of course. The snails themselves don't have much flavor but their texture is good.


Our village actually has a snail festival every summer. Tons of snails are consumed. I did a post about snails I found in our garden a few years ago. I called them petits-gris, and I think that's what they are around here. There's a link in that post to a post about the snail festival in our village.
Posted by Ken Broadhurst at 08:50