Christmas morning. Windy and rainy outside. I'll get my walk with the dog anyway; she doesn't really care unless rain is absolutely pouring down. They say it will be rainy and blustery outside all day. But it's not cold. 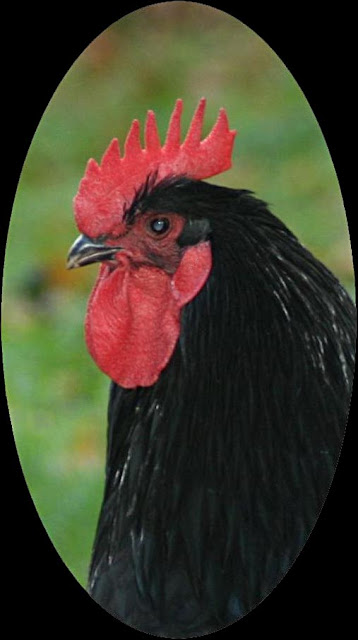 Un coq de la race « géline de Touraine »
A géline de Touraine rooster
Thanks to www.gelinedetouraine.fr for use of the photo
We haven't cooked Christmas dinner yet, so I can't show pictures of that. I'll just show you the main ingredients. The "undressed" géline (if you know what I mean) weighed about 2 kg, which is 4½ lbs., and cost 30 euros. That would be 6.67 euros, or nearly $9 U.S., per pound.

You pay for the undressed bird — head, feet, feathers, and all — and then the butcher "dresses" it (il prépare la volaille), so what you get weighs less. This one weighs just under 3¾ lbs. as pictured. I haven't yet looked inside to see if we got any giblets (abats in French). 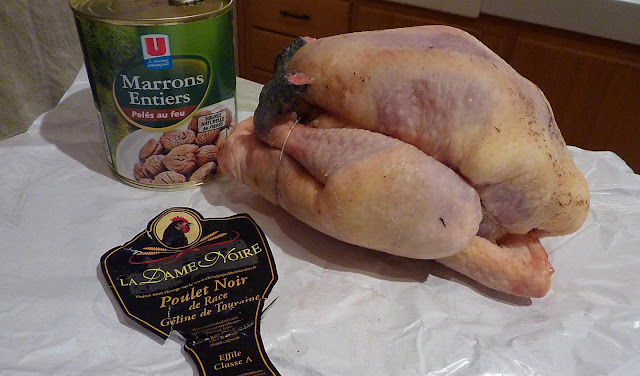 The chestnuts for the stuffing, and the bird we will stuff them into
Chestnuts are complicated in French, linguistically. They're called châtaignes [shah-TEH-nyuh], botanically, and the tree is the châtaignier [shah-teh-NYAY]. There's another tree called a maronnier [mah-ruh-NYAY] that we call a horse chestnut or buckeye tree, and its fruit is the marron [mah-RÕ] — with the French R and the nasal O vowel — which is not edible for humans.

But in cooking terms, châtaignes are commonly called marrons, so you get sweet treats like crème de marrons and marrons glacés, which are really châtaignes. The tin labeled « Marrons Entiers » actually and technically contains châtaignes. Got that? I'm not sure I have. As CHM says, the simplicity of the French language is stunning to behold.