There's no talk of snow on the news or weather this morning, so I wonder if the whole storm didn't fizzle out. When I got up yesterday and took Callie outdoors just a sunrise (8:30 a.m.), the grass, the gravel paths, the cars, and the paved road were completely glazed over. By 9:30, when we left for Tours, everything had started to melt.


Tours, a city of 300,000, is about 35 miles (60 km) west of Saint-Aignan. We drove over on two-lane highways. There was almost no traffic, and the road surfaces were wet but not slippery. We don't go into the center of Tours, but to the shopping areas around the east side of the city. Yesterday, we needed to go to the Asian supermarket and to Ikea.


For most things, we have everything we need here in the Saint-Aignan area ("metro" pop. 10,000), with our two largish supermarkets, two smaller ones, the open-air markets in Saint-Aignan itself (Saturday), across the river in Noyers-sur-Cher (Sunday), Montrichard (10 miles west), and Selles-sur-Cher (10 miles east). But for some things, we will drive the 35 miles to Tours or the 25 miles north to Blois several times a year. 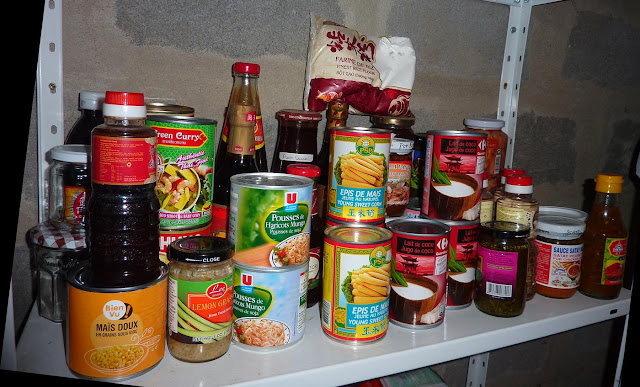 
Our main shopping in Tours has to do with exotic and imported foods. I've blogged about the Paris Store Asian supermarket many times. There used to be one in Blois, which is closer to us, but it shut down a year or two ago. The closest one is in the shopping area in the northern section of Tours, and we are lucky to have it.


We go over there and stock up on noodles, rice, tofu (in cans), sauces of all kinds, and frozen shrimp (for example) two or three times a year. We could almost open our own Asian market with all the supplies we have down in our cold-storage pantry. Yesterday, we were happy to find a one-kilogram bag of black peppercorns for €12.95. That quantity of peppercorns would cost €100 €50 at SuperU (I checked the price again). We also picked up a few jars of chunky peanut butter, which is not that easy to find around here.


If you live in Paris or other big cities, finding imported products is not a problem, of course. Eight or nine years ago, we would frequently drive up to Paris to re-supply the Asian shelves in our pantry, but that's an eight-hour drive round-trip. Now we just drive the hour or so over to Tours and the hour back. 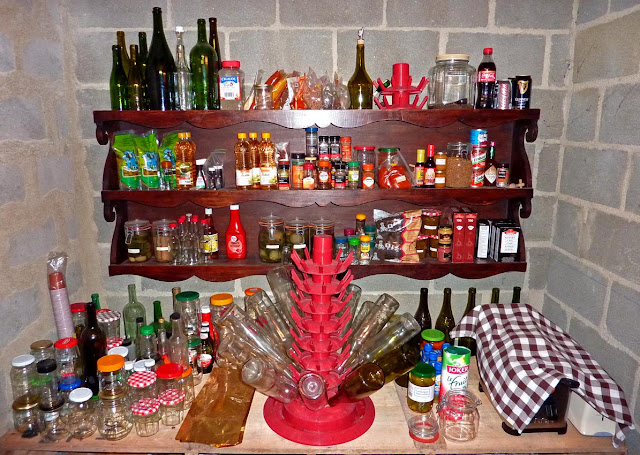 The far wall of the cellier (pantry): Are we becoming survivalists? 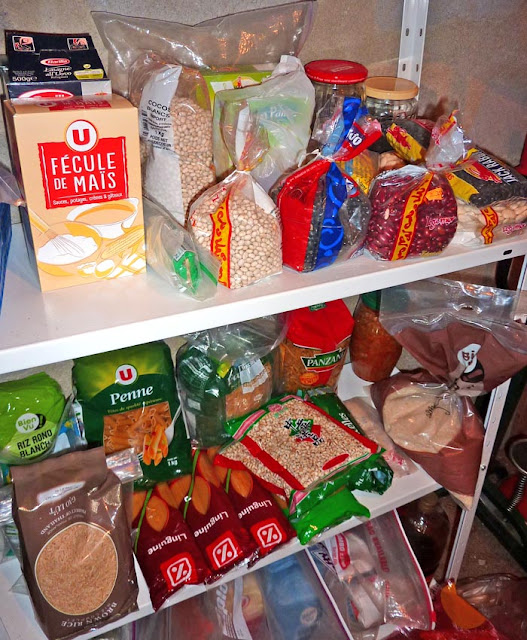 
Recently, we discovered that Ikea in Tours now sells fitted and flat sheets for American-standard king-size beds. Until this year, we've had to make do with the sheets we brought over from the U.S. nearly 10 years ago, and with a few king-size sheet sets that we've brought back from the U.S. on our annual trips back to see family and friends. But king-size sheets are heavy and bulky, taking up a good portion of the space in your suitcase when you travel.


We'd never been able to find king-size sheets here in France. They just don't have such large beds — the largest French beds are 160 cm wide, and our American one is 180 cm wide. We moved it here in 2003 without thinking about the problem of getting sheets for it 10 years down the line.


If and when we replace the mattress on our big bed, we'll need to buy two twin mattresses, each 90 cm wide. Then we'll be able to get fitted sheets (singles) easily, and flat sheets aren't a problem. The mattress we have is fine, and we don't want to replace it any time soon — especially since we can now get fitted sheets for it more or less locally.

Big problems, eh? Well, that's everyday life when you're an American expatriate in rural France.
Posted by Ken Broadhurst at 08:27