Stuffing and roasting the Touraine chicken

Even at 30 euros, the géline de Touraine we bought for Christmas dinner was worth the price. The géline really is a high-quality, extraordinary bird. I have to say I've never cooked or even tasted the more famous poulet de Bresse, which is raised in the Bresse province north of Lyon, so I can't make that comparison. The Bresse chicken is reputedly the finest fowl in France. One day I'll get one (but I don't know if you can around here — might have to go there). 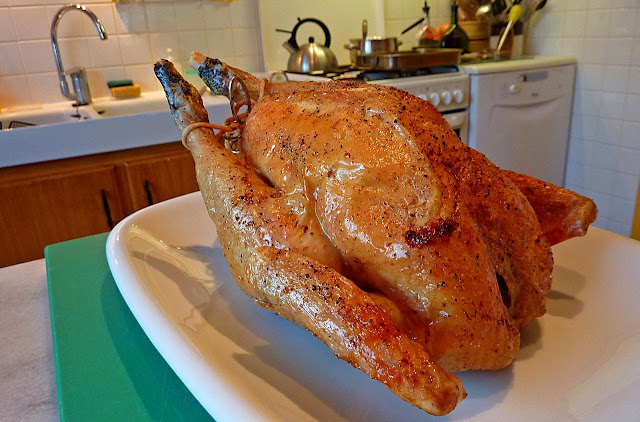 The oven-roasted farm-raised géline de Touraine chicken
Meanwhile, I don't know how any other chicken could be better than the géline. What I always try to think about when I splurge on special ingredients for a special meal is how much that meal would cost the two of us if we ordered it in a restaurant. You can't be frugal with ingredients all the time, even if you live on a limited income. Il faut se faire plaisir de temps en temps.
Anyway, I'll finish up the story of 2012's Christmas dinner. We made chestnut stuffing for the Touraine chicken, and we actually filled the bird with it for once instead of cooking all the stuffing in a separate pan. I posted the ingredients yesterday, and I just went back and updated that list to reflect what I actually put in the stuffing mixture. It was pretty much what I wrote yesterday, but I added cream to it when I realized the recipe didn't include melted butter and chicken broth for richness and moisture. The cream was a good addition.
The géline came with giblets, so I put the chicken liver in the mixture too. The first step in making the stuffing is to sauté the chopped onion, lardons, garlic, and mushrooms. When they're done (but not overcooked), take the pan off the heat and add the breadcrumbs, spices, and sage leaves. Stir all together and then add the chestnuts, some of which you've left whole and others of which you've roughly chopped. 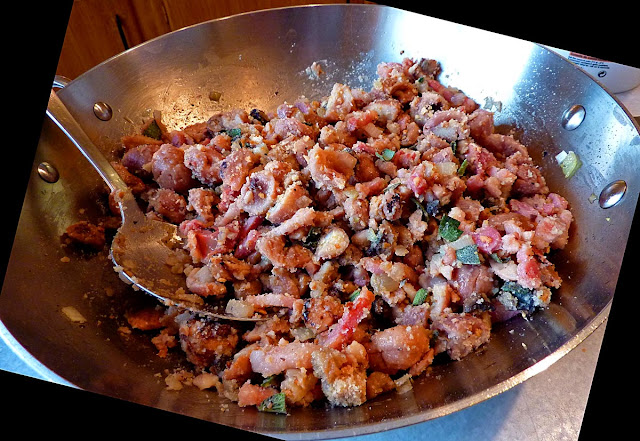 The stuffing mixture before the cream and eggs went in
Here are the ingredients for the chestnut stuffing in English:

Finally, when the mixture is fairly cool, add the two eggs and the cream (between a half and three-quarters of a cup, just enough to moisten the stuffing). Then you can stuff the chicken. Cook the rest of the stuffing in a loaf pan the way you would cook a pound cake (no need to butter or flour the pan). You could make the same stuffing mixture by substituting cubed bread for the chestnuts. 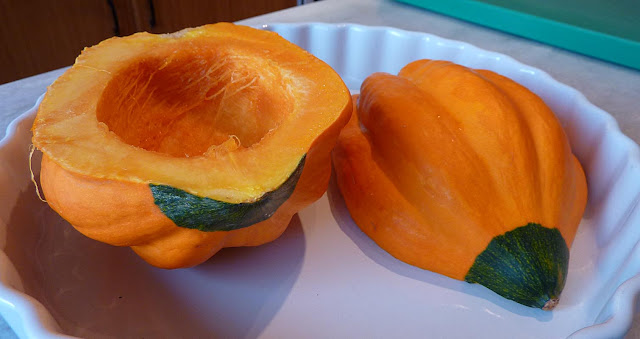 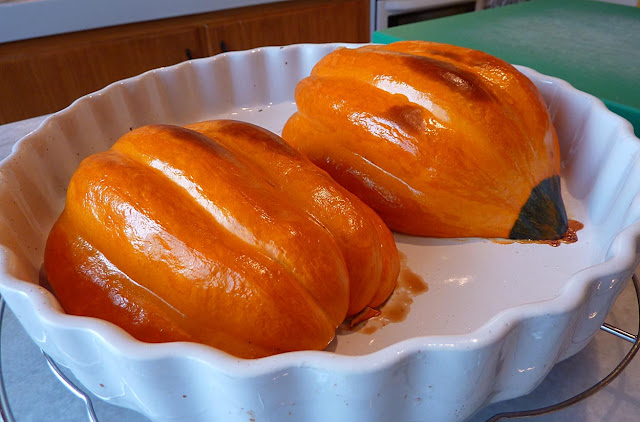 This hollowed-out winter squash, which we grew in last summer's garden, was spectacular.
We planted seeds we saved from a patidou squash purchased at the supermarket last year.
To prepare the stuffed géline for roasting, I just brushed it all over with olive oil and then salted and peppered it well. I roasted it on a rack in a pan with some liquid (water + white wine) in the bottom. I added more water as the liquid evaporated. Putting half an inch of liquid in the bottom of the pan keeps the chicken juices and fat drippings from burning.
I started the chicken roasting at a fairly low temperature (160ºC / (325ºF). After about 45 minutes, I turned it up to 190ºC / 375ºF. That's the opposite of what I usually do, and it was an experiment that worked. I wanted the chicken (and the stuffing inside) to cook through without over-browning the bird's skin, and I wanted to give the (significant) layer of fat under the skin on the breast and legs time to "render" or melt and "nourish" the meat
The total cooking time for the bird (4 lbs.) was about 90 minutes. I had planned to turn the heat up even higher to brown the chicken at the end, but I didn't need to. I basted the bird with the pan juices several times during the cooking. When the chicken was done, I turned off the oven and set the door ajar to let the bird rest for another 20 to 30 minutes.
The loaf pan of stuffing cooked in about 40 minutes' time in the oven with the chicken. We also roasted a winter squash in the oven during that same time, and we made some green beans to complete the meal. I didn't make gravy but just served some of the chicken drippings from the roasting pan with the beans, chicken, stuffing, and mashed squash. It was pretty simple (the most complicated part being the stuffing) and simply delicious.
Posted by Ken Broadhurst at 08:05