I'm still busy most days digitizing our collection of music CDs. I'm using iTunes for Windows, and it's going well. It has taken me some time to figure out how it all works, and the task is complicated because I want to have copies of the whole collection on two different computers — mostly as backups of each other, in case I mess up and delete something, or have a hard disk failure. I don't want to have to start over.


So far I have nearly 5,000 songs in the database, which takes up nearly 25 GB of disk space on each computer. I'm about two-thirds of the way through, I think.


Meanwhile, here's the recipe for that bread stuffing with dried fruit and walnuts that I made on Sunday. It's good, and Christmas is coming. 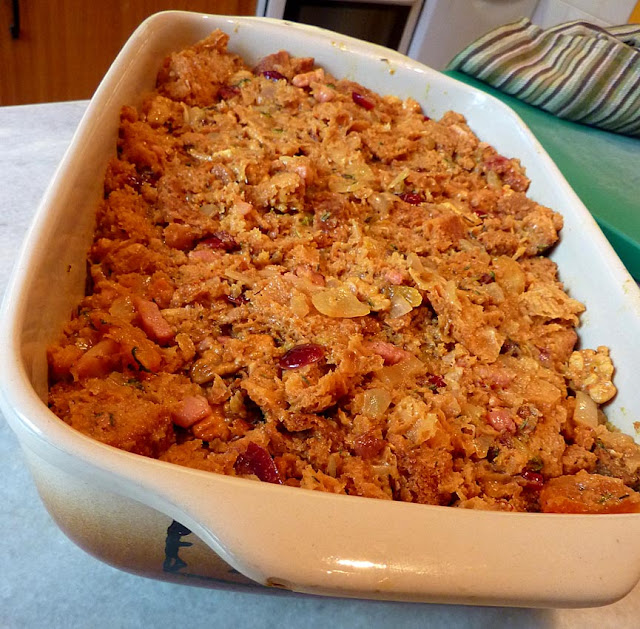 Spread the bread cubes on a baking sheet and cook them in a 350ºF (180ºC) oven until lightly browned. Transfer bread cubes to a large bowl, combined with the dried fruit, orange zest, toasted walnuts, and thyme.

Heat 4 Tbsp. butter in a skillet over medium heat. Add the celery, onions, and pork or ham. Cook, stirring, until lightly browned. Stir in the rest of the butter and let it melt.

Mix the celery, onion, and ham mixture and melted butter with into the bowl with the bread and fruit. Mix well. Stir in the beaten eggs and moisten the mixture with the broth. Season with salt and pepper and stir it all up well.

You could use other kinds of dried fruit (raisins, apples, prunes) or nuts. A U.S. cup, for those who aren't American, is 8 fluid ounces or 250 ml, by the way. This stuffing would be good with roast pork as well, but you might want to leave out the ham. The picture above shows the stuffing before it's baked. Yesterday I posted a picture of it all cooked and being served at the table.
Posted by Ken Broadhurst at 08:13