I've heard the French term « blanquette » translated into English as "blanket" — "blanket of veal." That makes me laugh, because I imagine trying to bite into and chew up a wool or fleece bed cover. Ugh. I guess the two terms are related, but the idea that the French word conveys is « blanc » or "white." A blanquette is veal or some other white meat — chicken, turkey, pork, or even lamb — cooked in and served with a white sauce. 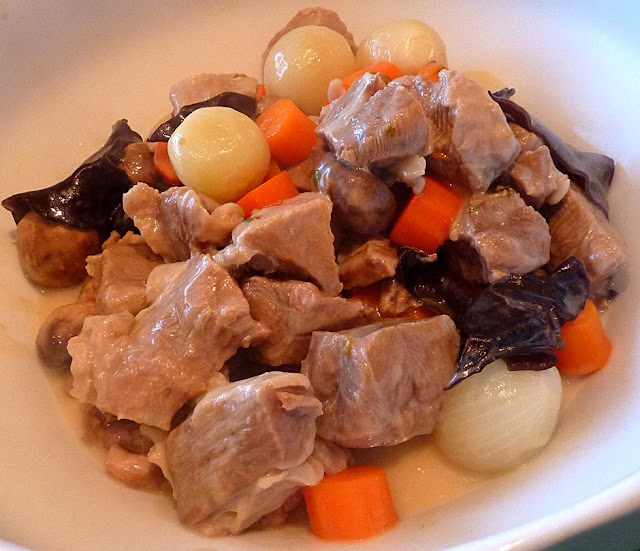 
We had blanquette de veau for dinner a couple of days ago. It's a wintertime dish. Comfort food. Bourgeois cooking (which means good home cooking). And it's a classic in France. Poking around in the blog this morning, I noticed a pattern. For us, blanquette seems to be a December dish.


It's not always veal, but it was last December (2011) as it was this past week. In December 2010, it was a blanquette de dinde — blanket of turkey, I guess you'd say. And in December 2009, it was a blanquette de poulet, but American-style: we call it chicken and dumplings. For all of them, the recipe I follow comes from a 40-year-old French cookbook that I like, and I posted it here. 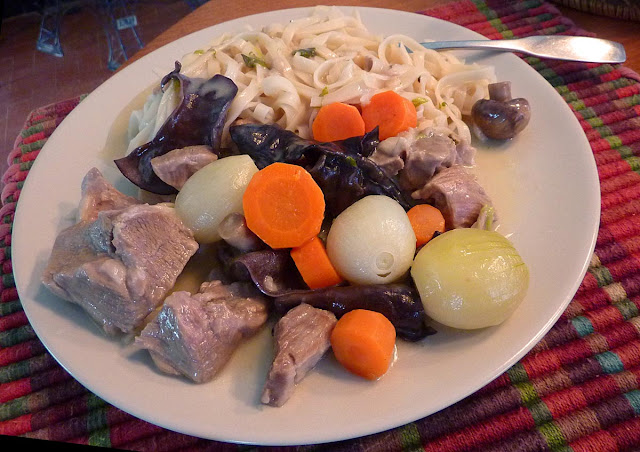 A generous portion of blanquette de veau, to which I added champignons noirs
and petits oignons this time, served with noodles


What place does the blanquette de veau occupy in the French diet? There's an annual poll asking French respondents what their favorite dish is. In 2012, blanquette came in fourth, after finishing as number 1 in the same poll six years ago. The dishes that came it ahead of it this year are magret de canard (duck breast, often grilled), moules-frites (mussels and French fries), and couscous (a North African spicy meat stew of meat and summer vegetables served with couscous "grain").

More about the French food poll to come...
Posted by Ken Broadhurst at 08:33