It's raining again this morning, and it's supposed to rain for another 36 or even 48 hours. On devient des palmipèdes, if you know what I mean — nice weather for ducks, though we see ourselves more as swans. Bon.
It was raining yesterday when we went out for the Peugeot's first blow-out-the-carbon drive. We filled up the tank at the Intermarché gas station after pouring the recommended fuel additive in. We headed toward Montrichard, where we had a couple of errands to run. Along the way, I turned up a side road toward Pontlevoy, which is up a fairly steep hill from the river valley. 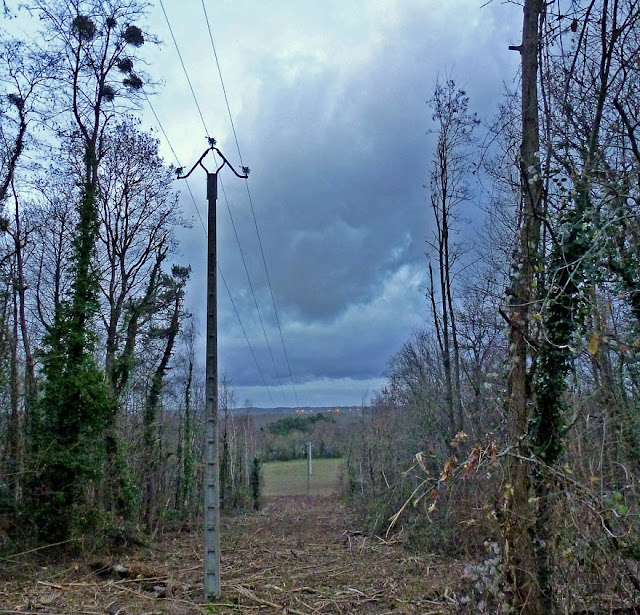 Typical winter weather, looking down the hill toward the river valley, past the trees.
that I'm afraid will fall on the electric lines in the next windstorm.
I kept the car in third gear, as Dominique the mechanic had instructed me to do. The compte-tours (tachometer) on the little Peugeot's instrument cluster shot up to 4000 RPMs at some points and stayed steadily at 3000 or even 3500 RPMs for long stretches. When the speed limit dropped from 90 kph to 50, I put the car in second gear and kept the RPMs at what I until recently would have considered totally unreasonable if not dangerous levels. Actually, the red danger zone on the compte-tours starts at 5000 RPMs. 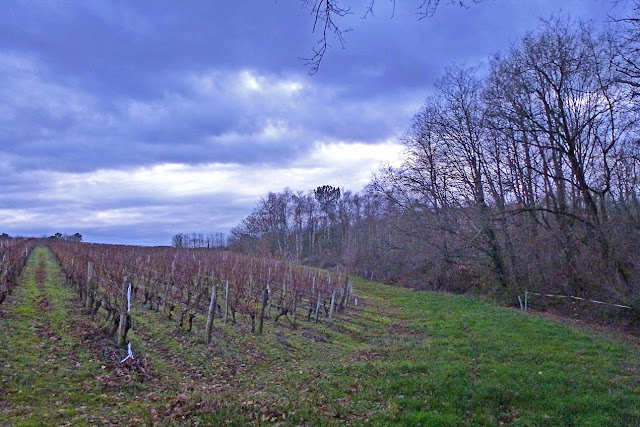 Winter vineyard scene, between rain showers
After stops at the bank and a couple of supermarkets in Montrichard, we headed west toward the villages of Chissay, Chisseaux, and Chenonceaux. Our destination was the wine cooperative called La Gourmandière, in Francueil, across the river from the château de Chenonceau. We were revving all the way. Since it was raining, there wasn't much traffic (though it was hard to find a parking space in Montrichard).
At the co-op, we bought 30 liters of our own preferred carburant or fuel — red wine — for the holidays (Walt's birthday is tomorrow — et que la fête commence). Local Gamay, Côt, and vin de pays rouge either filled our own jugs or came home with us in bag-in-box packaging. We didn't drink any, so I could continue my Formula 1 style of driving on the way back to Saint-Aignan. Sorry, but because of the rain, I didn't take any photos. 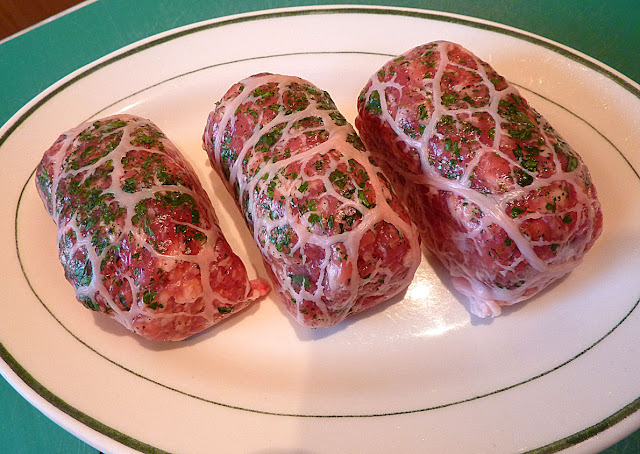 At the supermarket in Montrichard, we bought some of the little sausages called
crépinettes for our lunch. That's caul fat (crépine) wrapped around them.
I got the impression that the car really enjoyed the workout. A couple of hours running at 3000 RPMs and up to 4500 RPMs (in bursts) should have had the desired effect. I was a little disppointed that I didn't see any smoke coming out of the tailpipe — as Dominique had led to believe me I would — but of course I was concentrating on the narrow, curvy little roads ahead of me, and not the tailpipe. And don't get me wrong — I didn't speed, I just drove the speed limit in gears lower than I'm used to shifting into. 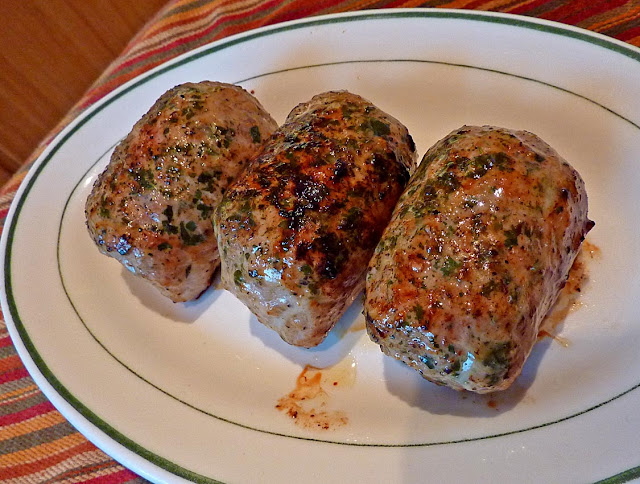 We cooked the crépinettes for lunch with pasta and some of our own tomato sauce.
Thinking back, I used to drive that way all the time, and especially when we came to France for vacations and rented cars. Downshifting and using the car engine's braking power in curves and when coming to a stop was how we drove back then. I've always driven cars with manual transmissions (90+ per cent of the cars in France have stick shifts, not automatics) and I therefore much preferred renting vehicles in France than wimpy little automatics in the U.S.
Next week, we plan to take the autoroute over to the big town of Vierzon, 35 miles east on the Cher River, to continue the blow-out. I'll drive at the legal speed limit of 130 kph (81 mph) in fourth gear, which should get the RPMs up. I hope the car — and the employees at the contrôle technique shop — will thank me.

* A chauffard is a reckless or aggressive driver — a real menace on the roads.
Posted by Ken Broadhurst at 08:54