Steak au poivre has been Walt's birthday dinner since 1981. I wasn't there for the very first one. He was  traveling around the south of France with some friends in December that year. In Antibes, on the Mediterranean coast, he had a steak au poivre in a restaurant on his birthday and thought it was really delicious. Memorable. 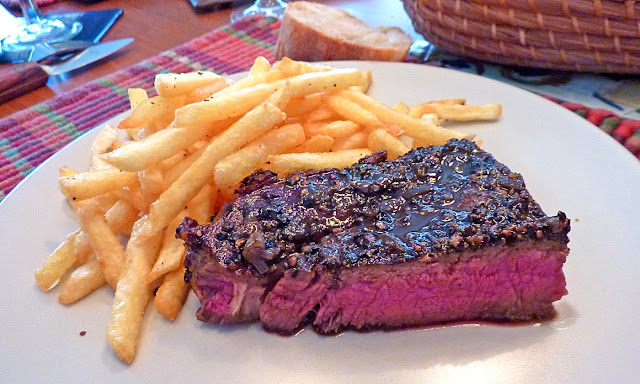 A year later we were both living in Washington DC when his birthday rolled around again. I told him I'd cook dinner. He told me about the steak au poivre in Antibes. I told him that I knew how to cook that — no problem. That was what we had for his 1982 birthday dinner. And we've made steak au poivre on December 21 every year since then.
In most years we've made the pepper steak with a cream sauce, which was my recipe in the 1970s. Then in the '90s we watched a Jacques Pépin (a well-known French cook and TV host who has lived in America for decades) and Julia Child (the American woman who introduced French cooking methods to America in the 1960s) cooking show in which Pépin makes his version of steak au poivre not with a cream sauce but with a sauce finished with butter. That's what we made this year (last year we made the cream sauce style — both are good).
We got a big, fairly thick piece of boneless entrecôte from the drive-up butcher this week — that's the cut known in different parts of the U.S. as rib-eye, New York strip, Delmonico, or club steak. To make French pepper steak, the first thing you do is crush some peppercorns using a mortar and pestle to make what is called a mignonnette de poivre. Then you rub the coarsely ground pepper all over the steak and let it sit for a couple of hours. 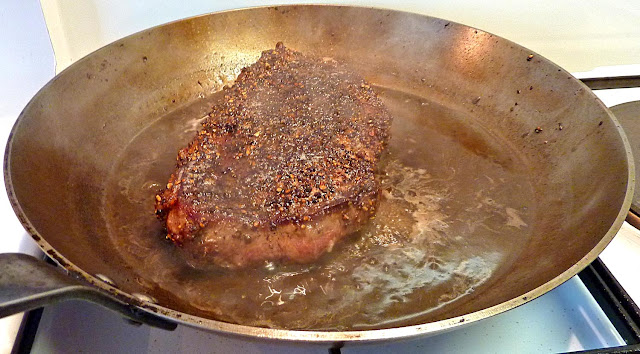 Sear the peppered steak on both sides in a heavy pan over high heat
When you're ready, you just sear the steak in butter over high heat in a thick-bottomed frying pan. Then take it out and cover it with foil and a kitchen towel, or put it in a warming oven, and let it rest for 10 or 15 minutes while you make the sauce. 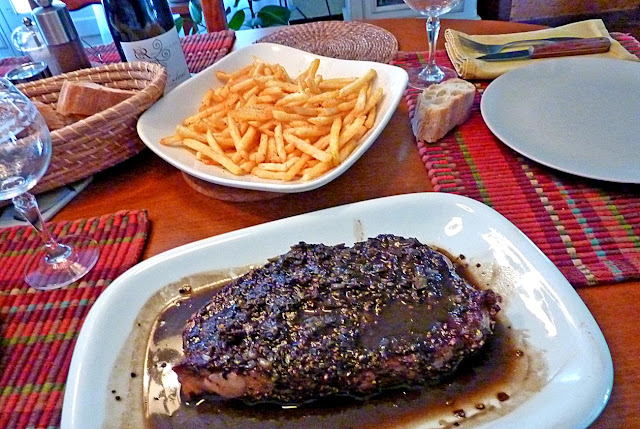 Dice up a shallot and toss it into the pan that the steak cooked in. Let it fry for a minute or two, and then pour a good glug of cognac (or whiskey) into the pan. You can flame it, but it's not absolutely necessary. You can also use white wine instead of cognac to make the sauce (but it won't be as good, IMHO). Let the alcohol or wine reduce a little over high heat, and then add a quarter cup of dark beef stock. Let that too reduce a little and then put in either cream or some butter cut into small pieces to melt and give the sauce a nice gloss.
Put the steak back in the pan for a minute or two and spoon some of the sauce over it. It's ready.
Posted by Ken Broadhurst at 08:41