Today is 12/12/12, or 12 December 2012. I always used to say that 12 was my lucky number, but 2012 hasn't been a particularly lucky year. The weather has been either freezing cold or much too wet for weeks on end. The garden was okay, but not great. Oh well. Walt and I did have a fantastic trip to the U.S. and Canada in May, after all. Now we'll soon have 13 to deal with.


My post title has to do with today's date and my converting of our music CDs. Yesterday I processed another 36 of them. I've been calling it "digitization" but the fact is that the CDs are already digital. I'm just copying them all to my hard disk. I'm up to more than 5,250 songs and more than 27 GB. 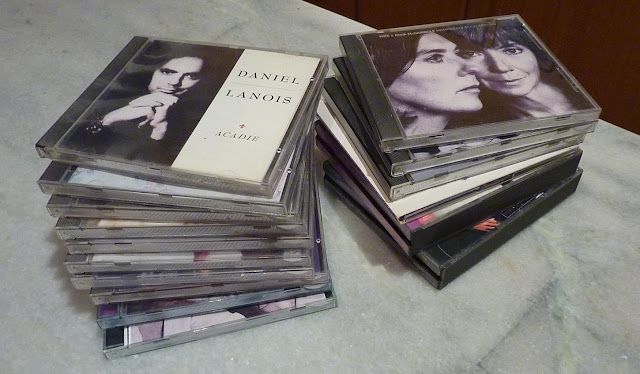 
As far as backing up the data, my plan is to have several copies of the whole database: two on hard disks on different computers, and then probably a copy on one or two SD memory cards that I can just put away for safekeeping.


Not only are we going to go "plastic-less" when it comes to music, but I'm also trying to go "paper-less" when it comes to newspaper articles. I read a lot of them every day, but I don't like to read sitting in front of the computer screen. I end up with an aching back and stiff neck. So for years I've been printing the articles I read so that I can sit comfortably while reading them. 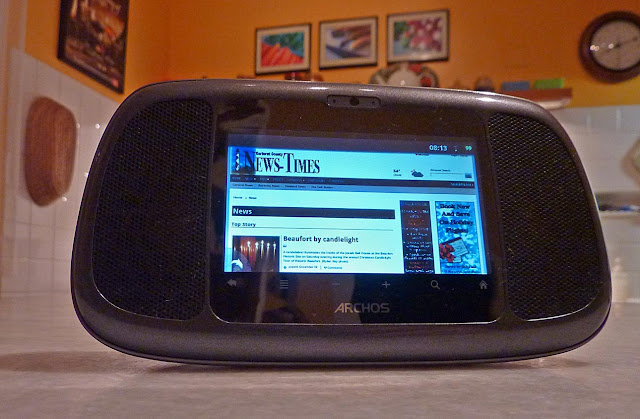 Reading the newspaper on the radio


Yesterday I spent the day reading articles on the screen of my little Archos wifi radio/tablet. And guess what — it was a good experience. The Archos lets me view and write e-mails, surf the web, play music, or listen to radio stations around the world. The only problem I have with it for reading is that, at 4 inches, the screen is very small.


I see a tablet computer with a bigger screen in my future. Not only will I save my neck, but I'll save a lot of money on printer paper and toner cartridges for my printer. The paper is a big hassle, because I can't stand to pay high prices for it and that means driving to Tours or Blois or Romorantin to buy several reams at a time when it's on sale.


Also yesterday we decided to make sandwiches for lunch out of the rest of the turkey we cooked on Sunday. I said to Walt that it was too bad we didn't have any sauerkraut, because turkey reuben sandwiches would be really good. Then the drive-up butcher stopped by at noon, and voilà — he had a tray of choucroute cuite on the truck. 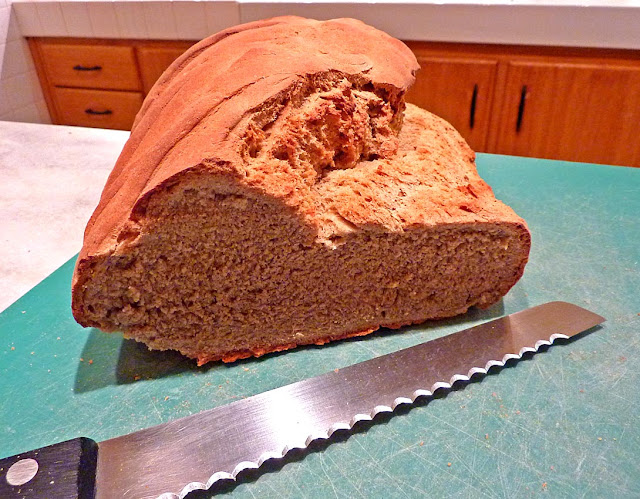 
Then we needed sandwich bread, so I decided to make some. The bread lady doesn't come by on Wednesdays. I found a recipe on Marmiton.fr for pain de campagne. I had all the ingredients, and I replaced part of the wheat flour with corn meal and buckwheat flour to make it more interesting.


It turned out to be easy to make, but since I'm not an experienced bread baker the loaf I made came out with a funny shape. Tant pis — it's delicious, and we should be able to make good sandwiches out of it. Now this morning I have to make some Russian dressing. That's easy too: mayonnaise, ketchup, and horseradish.


It's really cold this morning. The weather widget on my computer screen says it's –7ºC in Saint-Aignan — that's +19ºF. Our outdoor thermometer reads a little "warmer" than that, but it always reads a little higher than the official temperature. Poor Walt now has to go out in the cold with Callie.
Posted by Ken Broadhurst at 08:26