Yesterday we decided to drive over to the big town of Vierzon (pop. 27,500), about 75 km east of Saint-Aignan on the Cher River. It takes an hour, mostly by (toll = 5€) autoroute, to get there. One point of the trip was to take the car out at high speed (130 kph) in low gears (4th) to continue burning the carbon out of the engine in preparation for a new contrôle technique in January.


Another point was to do some shopping at the Grand Frais produce and grocery store that's over there. We were especially looking for vegetables, and we got what we wanted: panais (parsnips), topinambours (Jerusalem artichokes), rutabagas, choux de Bruxelles, céleri-branches (as opposed to céleri-rave), gombos (okra), pommes de terre, and more. Grand Frais is a good store that offers a wide selection at good prices. A lot of the fruits and vegetables are imported, I'm sure (many come from the tropics), but so be it. 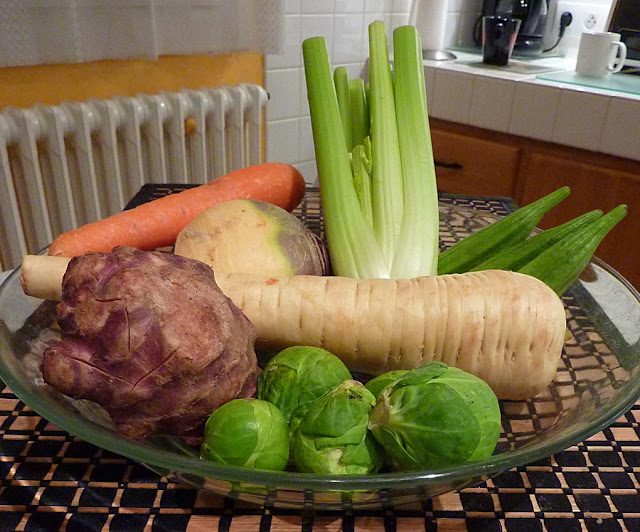 A sampling of the vegetables we found at Grand Frais in Vierzon. For those of you who live in the 37
(Indre-et-Loire), I'll note that there are no Grand Frais grocery stores in that département (or in the 86).


Preparing for the trip, we looked up Grand Frais on the internet to make sure that the Vierzon store would be open on December 26. And when we did, we noticed that the store was offering a promotional price on what they called dindes blanches ("white" turkeys, which I think means that they are not free-range birds) at 5.49 €/kg. Walt had been saying that this week he hoped to find a turkey we could put in the freezer to have in January or February.


So when we got to the store — which is sort of like a Trader Joe's in that it carries a full line of produce and groceries, including meat and dairy, but no non-food items — we went to the butcher counter and looked at the turkeys on offer. They were expensive (40 to 60 € apiece) and we didn't see any at the advertised special price. I asked the people behind the counter. 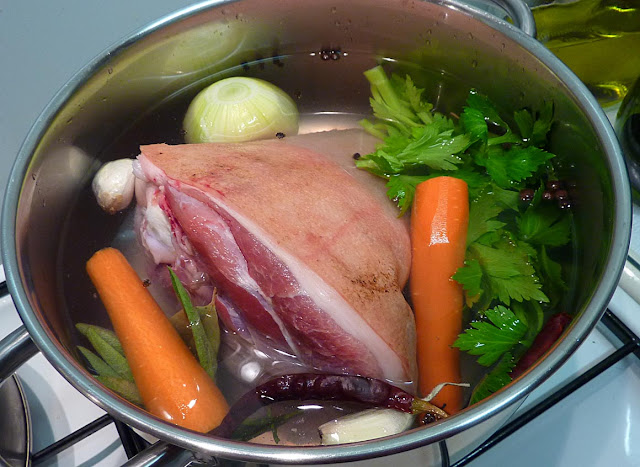 
One employee said she didn't know anything about it, and she asked the man working with her, who was busy cutting meat. He said they didn't have any more of the less expensive turkeys. "In fact, that promotion ran out the week before Christmas," he said. "It's too late." I told him that on the store's web site, it said clearly that the turkeys were on special offer until the end of December. Oh no, he said; vous vous trompez (you're wrong).


Then the woman working with him pointed to a huge poster on the wall behind the meat counter. Dindes blanches, offre spéciale, 5,49 €/kg. Offre valable jusqu'au 31 décembre. So there it was. "On that's an error, obviously," the man said. "We sold all those turkeys a long time ago."

A screen capture from the Grand Frais web site


I don't know about you, but I find that very frustrating. It's false advertising, and there is no offer of a rain check (though we wouldn't drive all the way back over there later just to get a turkey at that price). It happens to me more frequently than I want to dwell on that stores around here don't have the products they advertise at the published prices. It doesn't faze the employees to tell you they are désolés but there's nothing they can do about it.


By the way, the car ran great at 80 mph (the speed limit on the autoroute) in 4th gear at between 3000 and 3500 RPMs, for nearly an hour. I hope the high revs and the fuel additive are doing their job. I'm having a lot of fun driving like a racecar driver instead of like somebody's vieux grand-père.
Posted by Ken Broadhurst at 07:42