We had neighbors over for pre-dinner drinks and finger-foods last night. The French tradition of apéritifs (also called apéros in informal language) makes for a nice way to have people in without a lot of fuss and bother. D. and A. live two houses down the road from us in an old farmhouse that they have spent the last 33 years fixing up. They're both 66 years old.

They'd never been inside our house before — not even before we came to live here. We've been to their place only once. In other words, we've lived close to each other for 10 years now but we've never socialized. D. and A. don't live here full-time. They come from the Paris region, where they have an apartment about 15 miles northwest of the city. 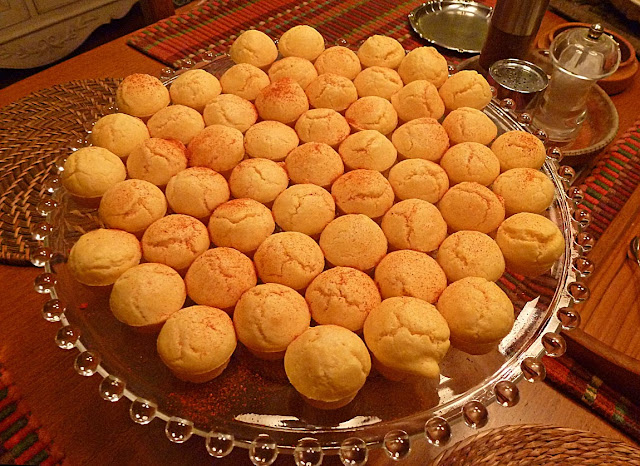 Walt made a batch of corn muffins for us to have with our glass of wine.
The muffins have grated ewe's milk cheese (fromage de brebis) in the batter.

D. worked most of his life as a boulanger in a wholesale bread bakery in the town where they have their apartment. A. worked for more than 20 years, she told me, in the offices of the Galeries Lafayette, the big department store in Paris. I asked them how they ended up in Saint-Aignan, and they said one of D.'s co-workers (who was a pâtissier or pastry cook) told them about the house, which was owned by an aunt of his who had just died. They bought it. They no other connections to the Saint-Aignan area back then.

They said that when they first saw their house back in the late 1970s, there were nine people living in it — in a single room. The floor was terre battue (that's packed-down dirt). In the country in Touraine, the people and whatever farm animals they kept often lived together in a single building — the cows or goats on one end, and the people on the other, in a single room with a big fireplace that provided heat and served as the kitchen. 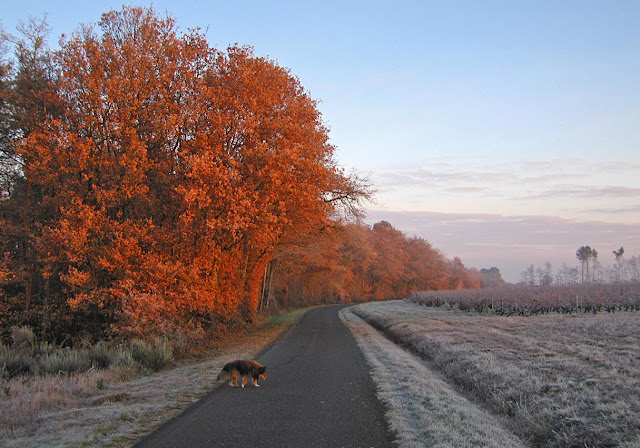 D. and A. said they have never flown on an airplane. Well, he said he was on a plane once, many years ago, when he was doing his military service.  They spend most of the year down here now, since she retired from her job, but they keep their apartment in the Paris region and spend part of the winter there. They said if we ever want to go spend a weekend up there when they are down here, they'd be happy to give us the keys. And there's a garage for the car. They said they'd be glad to keep Callie for us.
Posted by Ken Broadhurst at 07:32