Why the weather matters so much

Once or twice over the past 5+ years, people have made remarks to me about the prominent place weather plays in my blog posts, and evidently in our lives here in Saint-Aignan. In fact, that's true and it's normal, when some of your main occupations are fixing up a house so that you can live comfortably in it, maintaining a big yard, and putting in and tending a vegetable garden every spring and summer. 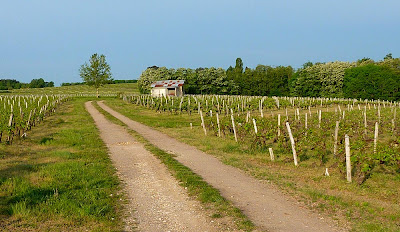 The Renaudière vineyard in early May 2011
Making the house comfortable has meant, as much as anything, making it warm and dry. But when we got here in June 2003, the first few months were so hot that I wondered how we would survive in such a place without air-conditioning. Intellectually, I knew better. I had lived in Paris for 6 or 7 years back in the 1970s and early '80s. Some summers were hot — 1975 and, especially, 1976, for example — but the heat waves came only once in a blue moon and seldom lasted more than a couple of weeks.

Thinking back on it, I realize didn't really spend very many summers in France. I was working as a teacher back then, and I would take advantage of summers as a time to go back and visit family and friends in the U.S. — mostly in North Carolina and Illinois, where the summers could be steamy, but everything was air-conditioned. Fact is, I hadn't lived in the Loire Valley before 2003, and I hoped summer weather here wouldn't always be as hot. In fact, we've never really felt the need to have the house air-conditioned since that first summer. 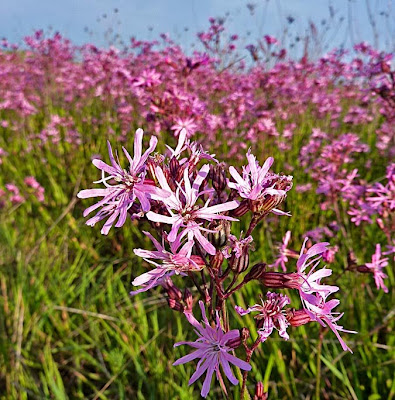 This year we're seeing summertime flowers
a month or two earlier than usual.
Over the past eight years, we've had beautiful summers (2004, 2005) and we've had lousy summers (especially 2007). Most have been middling, like 2010, when the weather never could make up its mind. It was hot and humid one day, chilly and windy the next, and mild and pleasant the next. Overall, it wasn't bad, but I heard people grumbling about it. Our garden was a success, but the coolish weather meant tomatoes and eggplants didn't ripen until very late in the season.

After the heat wave of 2003 came the first winter we spent in Saint-Aignan. The '03-'04 winter was not particularly cold, but it was windy and wet. I don't think we had any snow that first winter, though I had seen snow in Saint-Aignan in February 2003, when I was here for a few days to work out some details about the house purchase. In January 2004, we had a week of high winds. I mean 40 to 60 miles an hour all day and night long for about a week. It seemed like it would never end. It wasn't a cold wind, but it was unnerving. We kept waiting for trees to fall or the power to fail. 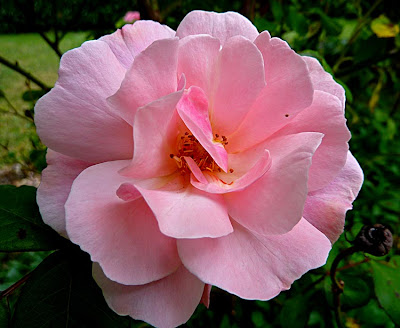 We don't usually have roses until early June.
That first winter, we found out that the four windows in the back of our house, facing west — the windows in two bedrooms and two bathrooms — were totally inadequate to keep out cold drafts and even rain. In the middle of the night, the window in the bigger bedroom would suddenly pop open when a gust of wind hit the house. It happened even when the shutters were closed. The window latches were worn out. The windows were the French-style ones that open into the room, and they were hopelessly weather-beaten.

And then one morning, after a night of wind and rain, we got up to find a big puddle of water on the floor in the smaller bedroom. It was rain water. Luckily, the floor is tile. The window was closed as tight as it could be —it hadn't even blown open. But wind-driven rain had beaten against it so hard that water had come in all around it and fairly well flooded the room. We knew we had to take action. In early April, we had four new sliding, double-glazed windows put in on that side of the house, which takes the brunt of our rough weather. 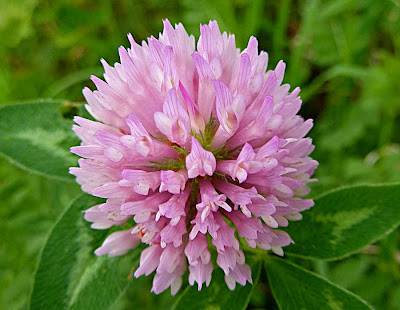 A clover flower
Click the image to enlarge it.
So some summers can be hot and dry. We may be headed that way this year. Time will tell. It's already much drier than we'd like. We'll have a vegetable garden, and we can water it. Water costs, but we collect what rainwater we can collect — it's runoff from the roof of the house and the roof of the garden shed. A dry summer will mean a successful garden, but it will cost us if we have to use a lot of tap water on it.

The garden of 2007, however, was anything but successful. That year, the weather started out hot and dry in April but turned rainy and almost chilly in May. The rain and chill lasted until September. In July and August, weeds took over the garden plots. It was too muddy for us to do much about it. I remember going out one week to hack at and pull on the weeds as best I could, but my efforts were inadequate. It was a case of "too little too late." 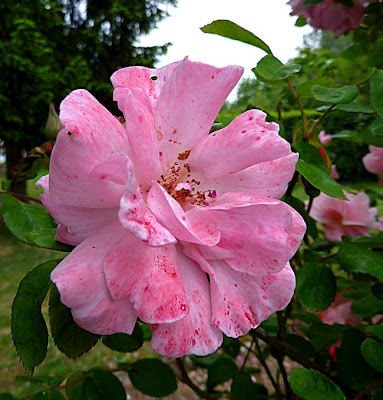 Another early rose out in the garden
Oh, and in June 2007, we had downpours worthy of the monsoon rains that come with hurricanes on the Carolina coast. One June morning at about 8:00, water started pouring in through a new crack in the kitchen ceiling, falling on the microwave oven and a big transformer we use to convert French 220V current to the 110V current that some of our kitchen appliances require. All we could do was move things as fast as possible and hope we didn't get electrocuted. We mopped up. We had a roofer in, who said that debris on the roof had formed a dam, causing rainwater to back up and run in over and around the roof tiles.

Finally, that summer, the leaves on the tomato plants all turned black. The tomatoes themselves developed big black "bruises" on them. Most were lost to the damp chill. Like the grape-growers, we sprayed our plants with a product called "the Bordeaux mixture," a fungicide, but to no avail. Everybody wondered whether the local grape crop would come in or be ruined. Finally, in September, the weather suddenly turned beautiful and sunny, and the grapes were saved. It was too late for the tomatoes. 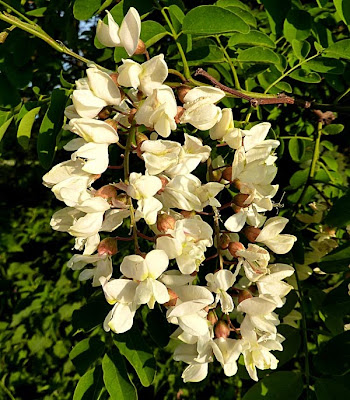 A cluster of acacia flowers...
In 2006, with the price of heating oil rising steadily, we had a wood-burning stove put in. We had a fireplace that wouldn't draw enough air, so every time we lit a fire in it the living room would fill up with smoke. The wood stove, with it's sealed firebox, solved that problem. Building a fire in it made the house a lot warmer and cost a lot less than running the oil-fired boiler all the time. It was another great step forward.

In late February 2010, we had a big windstorm that blew down dozens of trees all around us, including two in our yard. One of the tall local trees fell on the electrical wires that bring current up to the nine houses up on the hill where we live. For five days, we had no power. Thank goodness we had the wood stove for heat (the boiler won't work without electricity) and bottled gas for our cook stove. 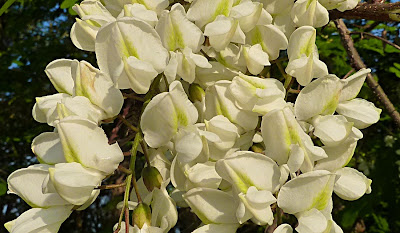 ...and a closeup
In California and other places where I've lived and worked, the weather was interesting, but it didn't matter much unless it really interfered with getting back and forth to work. Now it matters nearly every day. And there's never really a dull moment from that point of view. As I type this, I hear the morning news reporting how drought conditions are threatening farmers' crops all around France. That's the real danger right now.
Posted by ckb at 07:31