We got a little more rain last night. Big fat raindrops slapped against the Velux roof windows for an hour or two, in two or three showers over the course of the evening. Rainfall seems to come in either 1 mm (a trace) or 6 mm (¼") quantities these days. We also had just a little bit of thunder and lightning.

I am really happy for anybody who decided to take a vacation trip to the north of France in April 2011. That person enjoyed fantastic weather. Down south, on the Côte d'Azur, Provence, or even in the Southwest, the weather wasn't quite so nice. That's a pattern I've noticed over the past 8 or 10 years. April is often dry and warm up north in France, but wet and chilly down south, near the Mediterranean. 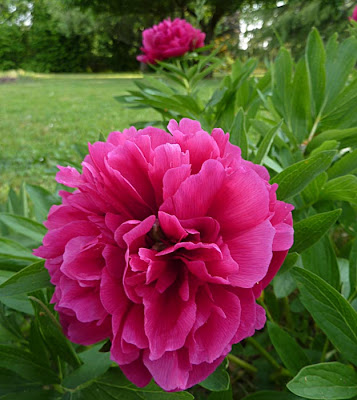 Peonies in the back garden
Yesterday we made the drive over to « Romo » to do some shopping. Romorantin is one of the three largest towns in our département (Loir-et-Cher), with a population of about 20,000 (Saint-Aignan is about 4,000). There are more and more big-box stores over there as the years go by, including a Centre Leclerc "hypermarket." We needed outdoor chairs and our weekly groceries. Leclerc has a good selection of outdoor furniture, and at good prices.

Romo is about 40 kilometers/25 miles from our house. All the big hypermarkets (superstores) are about that distance from us — there are stores in Loches, Amboise, Blois, and Romo. It's not a trip we make often, because of the price of gas and the general hassle of going there. But the Centre Leclerc has a bigger selection of specialized merchandise than any store in the immediate Saint-Aignan area, so we drive over there or to one of the other hypermarkets several times a year. 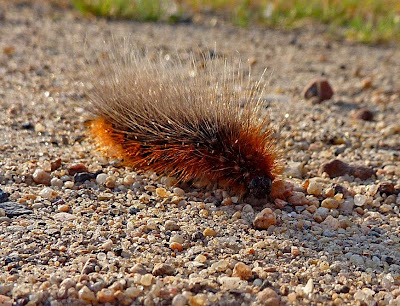 On a recent walk, a caterpillar... 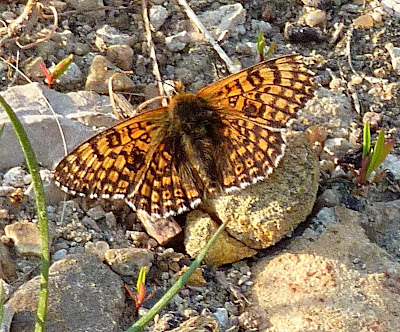 ...and a butterfly out on the vineyard road
As for the price of gas, we filled the Peugeot's fuel tank up yesterday for the first time since March 9. The Peugeot is a little 206. It has a diesel engine and a 12-gallon fuel tank (that's U.S. gallons, which are smaller than British gallons). We put in 40 liters of diesel fuel — 10½ gallons — and it cost us 53 euros, or about $79.00 U.S. at today's exchange rate. We noticed that the diesel fuel prices at SuperU and Leclerc were exactly the same. 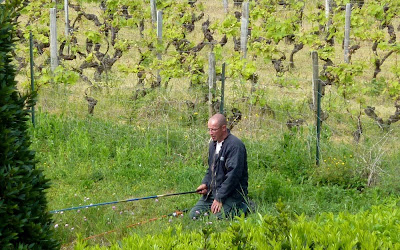 A couple of days ago this guy came and fished in the pond out back
for an hour or two. I don't know if he caught anything, or even if
he's really allowed to fish in a pond that is owned by the village.
On the way over, I decided to drive through the center of Romo rather than around the edges on the ring-road bypass, just for the view. It's a pretty little town, with a river, a large green park, and the nice narrow "main street." There's a Michelin-starred restaurant there, and a big new market hall. I noticed that the market is having a special "asparagus and strawberries day" next Wednesday. Those are two of the surrounding region's special springtime food products. 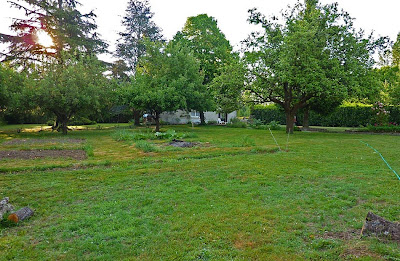 Here's how the back yard is looking these days.
The house is behind the apple, linden, and cedar trees.
It was one of those days when the shopping went well. The store actually had the outdoor chairs we wanted, so we were successful. Every success counts! Now we can set up our lawn tent, get out the table we bought a year or two ago, put the chairs around it, and start spending more time in the back yard. Let's hope the weather doesn't go south on us.
Posted by ckb at 07:46