The garden is all tilled and good to go. The weather is all chilled and not so conducive. It's not exactly cold outside, but it's much cooler than it has been. Today is the 15th, and the saints de glace are over — that's the May 11, 12, and 13 saints' days, which are supposed by popular wisdom to be chilly with a chance of frost in northern France.

The weather will warm up again and we'll set plants out in the garden plots this week — too many tomatoes (but can you really have too many fresh tomatoes?), a lot of eggplants (ditto), pumpkins, cucumbers, golden sunburst squash (thanks to a friend), and others crops. Corn, haricot vert, and lima bean seeds will go directly into the ground.

Meanwhile, here are some more photos from that April 1 we spent in Paris in 2002. 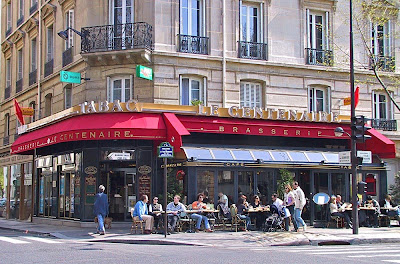 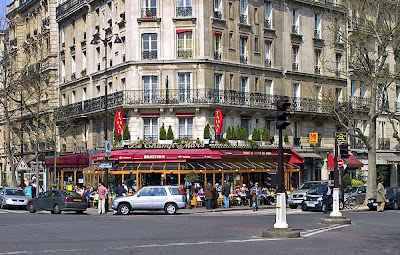 Another café we've always liked is Le Champs de Mars, near
the Eiffel Tower. You could call it touristy, but the food —
steaks, dinner salads — is usually excellent.
It was in 1995. We had cut short a vacation in the Lot, at Puy-l'Evêque, to take a short side trip to Provence. It was October, and as we headed on north to Paris, where we didn't have a hotel room reserved, we had the idea of calling a vacation apartment rental agency in California to see if they had any last-minute vacancies. They did — a studio apartment on a quiet little street in the 7th. We booked it, giving them a credit card number over the phone for the payment. 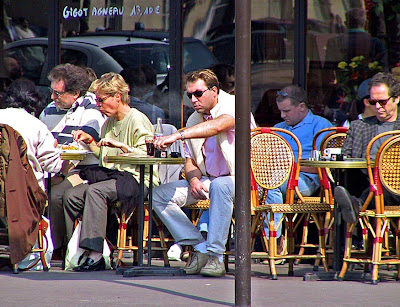 People enjoying food and drink on the place de
l'Ecole-Militaire — nobody we know, however
When we arrived in Paris at noontime that October day, it was starting to rain. It was a Sunday, so the neighborhood was quiet and a lot of businesses and even restaurants were closed. We were hungry. Luckily, the Centenaire was open. We ate a roast chicken that was about the best either one of us had ever tasted, and had a side of pommes frites (French fries) and a little bottle of red wine. As I said, it was memorable. We still talk about it today. 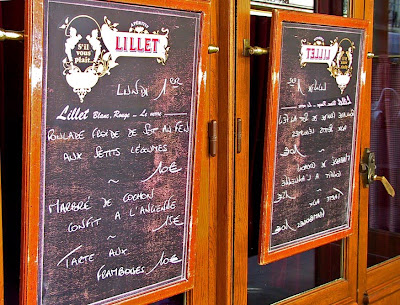 I like this mirror image picture of a chalkboard menu.
I've been back to the Centenaire several times over the years, but the food has never been as good as that first time. Cafés are notoriously changeable. The quality of the food and the cooking all depends on who happens to be doing the ordering and working in the kitchen at any given time. Sometimes you luck out; sometimes not. 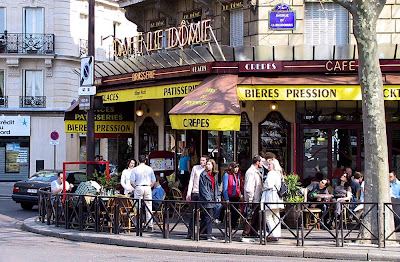 Another popular place in the 7th, the Café le Dôme
We stayed in apartments in the 7th arrondissement four or five times in the 1990s. It's more or less a residential neighborhood, but with a lot of cafés and restaurants. It also has a good if touristy market street in the rue Cler (of Rick Steves fame), and a great market on Thursday and Saturday mornings on the avenue de Saxe. 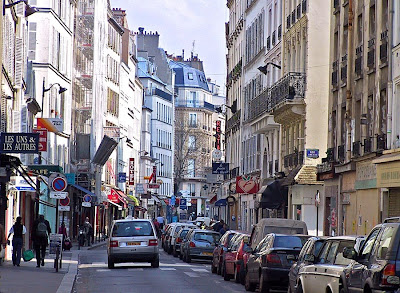 A rue St-Dominque street scene
The 7th isn't exactly central Paris, but it is in the inner ring of arrondissements, and you can walk to nearly anywhere in central Paris from there. It's a fancy neighorbood, in fact, with expensive shopping streets like the rue St-Dominique. When Michelle and Barack Obama were in Paris a few years ago, they had dinner at a 7th arrondissement restaurant called la Fontaine de Mars. 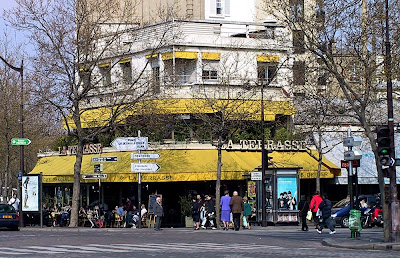 La Terrasse is a big café near the rue Cler at Ecole-Militaire
A couple of times we noticed well-known political figures in shops — National Assembly president Jean-Louis Debré shopping in a produce market on rue Cler, or former government minister Michèle Alliot-Marie at a café on the avenue de la Tour-Maubourg. We enjoyed all our stays in that part of Paris.
Posted by ckb at 07:36