Wow, it's actually raining outside this morning! This is the first time we've had real rain in so long — I'm tempted to say "in living memory." Let's hope it continues for a while and we get some significant water out of it. It's time to plant the garden now, and the soil needs moisture. 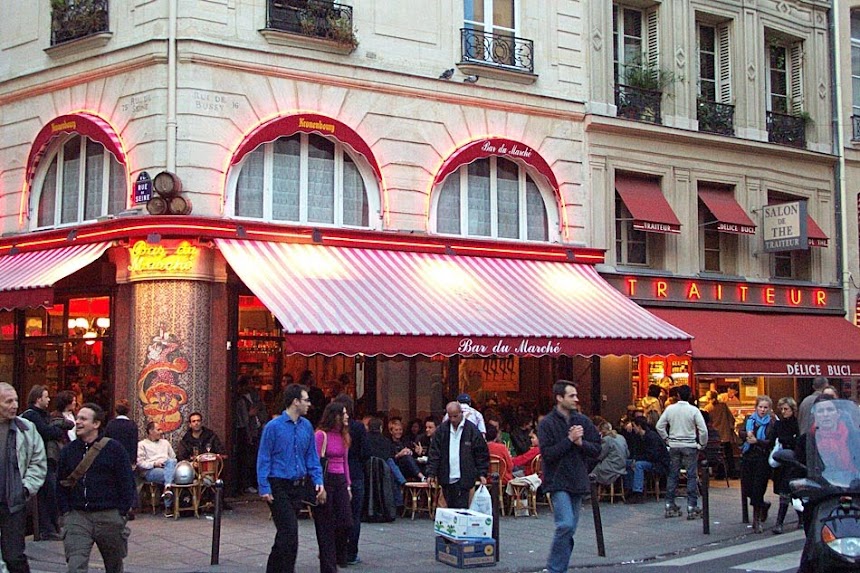 On the rue de Buci in Paris on April 1, 2002
With the Blogger outage yesterday, I was able to focus on yard work rather than blogging. I tilled up two more garden plots. The ground was like concrete – it's mostly clay, and clay has two states: squishy-muddy, or harder than rock. Since it hadn't rained in a long time... well, you get the picture.

The Blogger outage was a first, if I remember correctly. I've been blogging for 5½ years now, and never before have I not been able to post anything because of a Blogger outage. In the past, we've had DSL outages. We've had power outages. And there have been days when Blogger wouldn't accept pictures. But a total Blogger outage was a new experience. 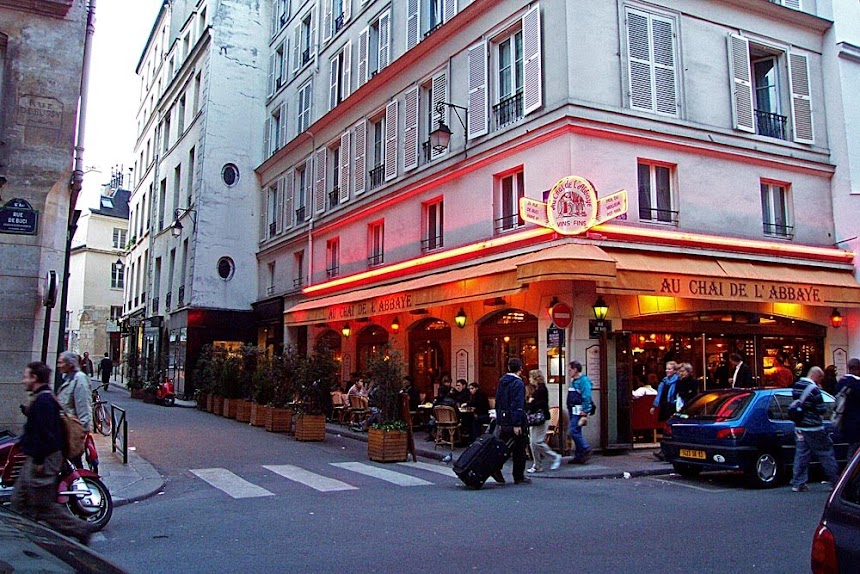 Another café on the rue de Buci that April 1 evening
In a comment on my last post, Judy a.k.a. Seine Judith, asked about a picture she noticed in one of my photos of our ongoing renovations and re-decorating. It's the first picture above. I said in a comment that it was a picture of Walt's, but it turns out to be one that I took. It was April 1, 2002, and we had arrived in Paris 48 hours earlier for a two week vacation. Over the weekend we had gone to the Casino de Paris for a concert by Alain Souchon, and to the Olympia for one by Serge Lama. We were jet-lagged, exhausted, and ecstatic. 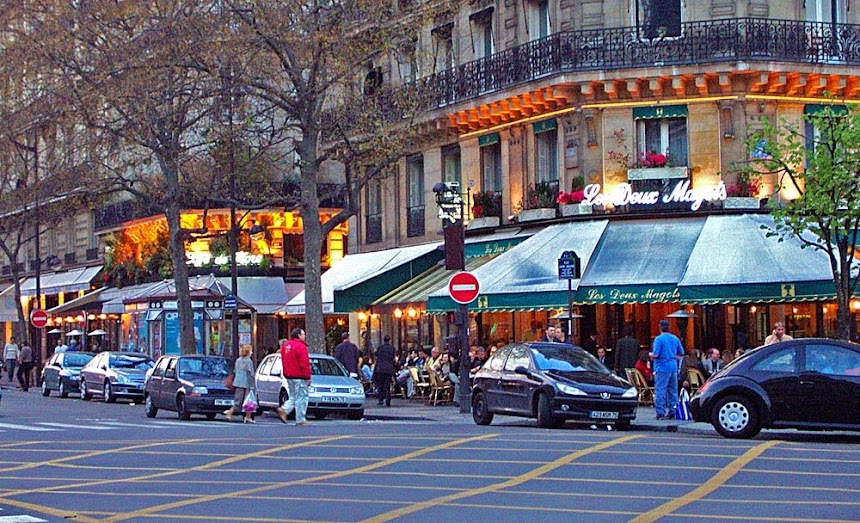 Le Café des Deux Magots, and the Café de Flore in the background
The apartment we had rented for the vacation was on the rue Mayet, just off rue de Sèvres near métro Duroc. On Monday, April Fool's Day, Walt and I wandered around nearby Saint-Germain-des-Près, the neighborhood where he and I — and Judy — spent a lot of time back in 1981-82. Actually, she and Walt both lived for a while in a pension de famille there, on rue du Four. 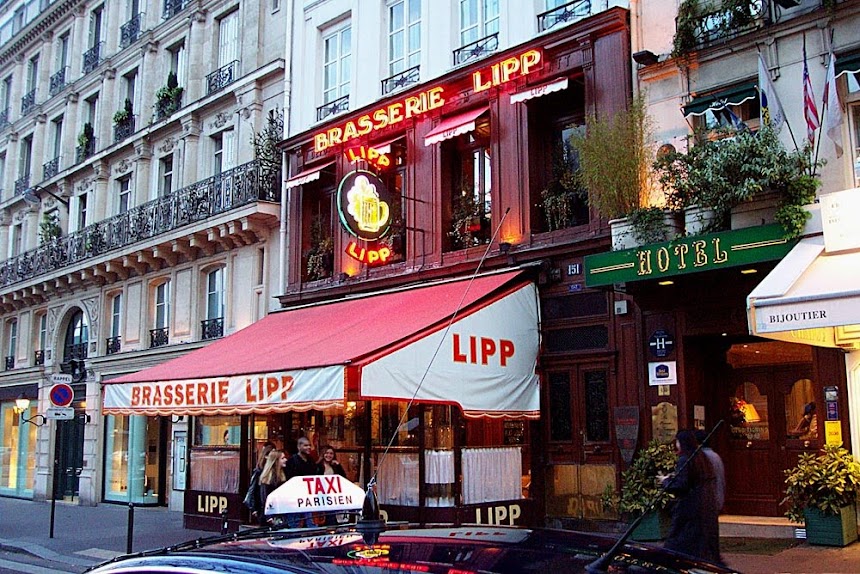 La Brasserie Lipp, a St-Germain institution
It was a beautiful evening, and I was taking pictures with one of my first digital cameras, a Kodak DC4800. It was a clunky camera by today's standards, but I always liked the pictures it took. I was enjoying the look and colors of all the cafés and restaurants, which were just turning on their inside lights and their neon signs, and the nice weather. 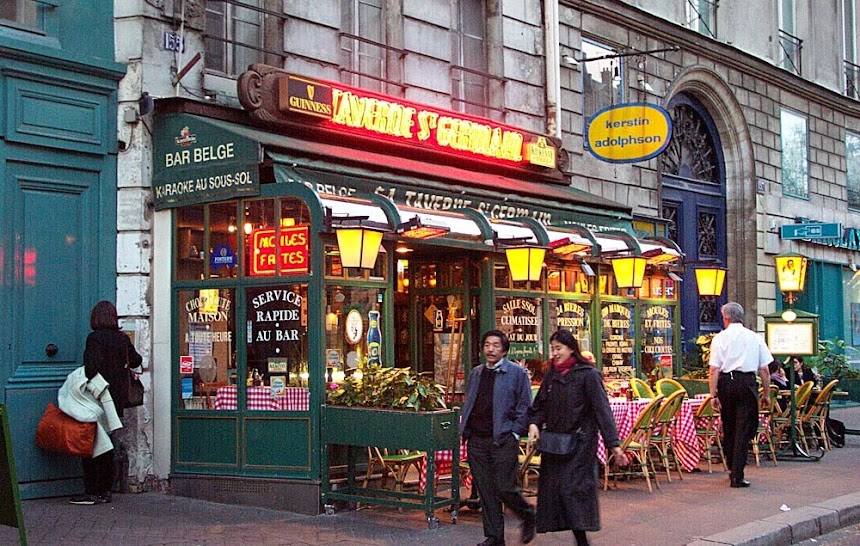 La Taverne St-Germain
That April trip to Paris was, unbeknownst to us at the time, our last actual vacation in France before becoming residents. By April 2003, we had come back to France, found a house to buy near Saint-Aignan, and become homeowners here. We both quit our jobs that year before moving ourselves, our dog, and all our possessions to this house that we are still in the process of improving and renovating.
Posted by ckb at 08:59