Okay, Blogger is back. It was touch and go for a few minutes there.

We woke up to a strange sound at four o'clock this morning —
a hard rain falling. It apparently didn't last very long though. Nothing looks very wet outside. 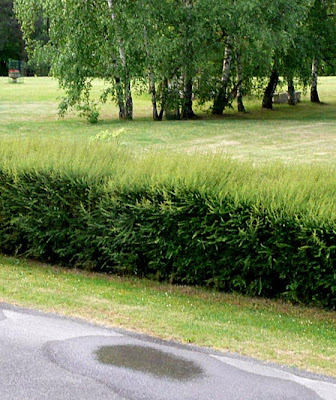 Looking out the kitchen window at 7:45 a.m. today,
I saw a rare sight: a puddle.
The news is that there was a damaging earthquake in Spain. The old town of Lorca, in the southeast, reports 8 dead and nearly 175 injured. Buildings are down, including the steeple of the old church. It feels like the earthquakes are coming this way. That worries me. Saint-Aignan supposedly had a significant earthquake in 1715. Before and after shots of our stairwell and landing
Here in France, the government has decided to take down all the signs that for the past few years have warned drivers that they are about to pass a speed-control camera. Now there's no warning. People will have to obey the speed limits at all times, not just when there's a camera. Imagine!

And they say they are going to put another one thousand cameras on the roads all around the country. They are also considering lowering the speed limit in cities and towns from
50 kph (30 mph) to 30 kph (20 mph). April was a deadly month on French highways. 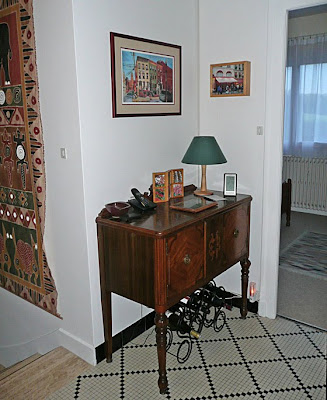 Yesterday Walt put up his Albany cousin's painting.
Woody Allen's film that he shot in Paris is causing a big sensation at the Cannes film festival. I don't know if the film is really good or if the French media are just excited that Allen filmed it in France. Carla Bruni-Sarkozy, the French First Lady, has a minor role in it. 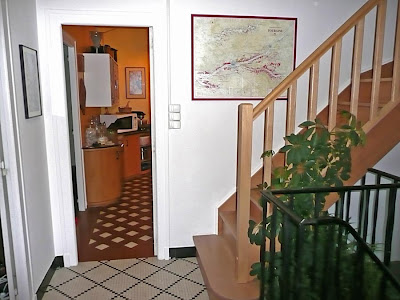 Walt also put up the Touraine vineyards map
that we recently had mounted and framed.
France 2 news reports that a shopping trip to a big supermarket in Germany costs 30% less than the same shopping trip in France. A lot of French people who live along the border with Germany are doing their shopping there. Since the adoption of the euro, it's very easy to compare prices in other euro countries with prices in France. 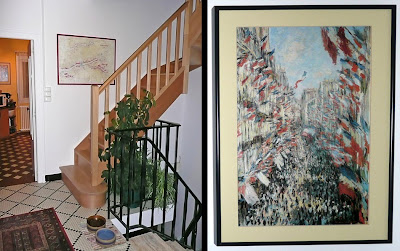 Another view of the new stair, and a close-up of a print
we have of a Monet painting called La Rue Montorgueil.
I used to live on that street in Paris.
There's a proposal to abolish the income tax in France. Income taxes represent only 6% of the French government's revenues. I'm surprised that figure is so low. I wonder if most of the government's revenues don't come from the VAT tax and the taxes on gasoline and diesel fuel, which are very high. 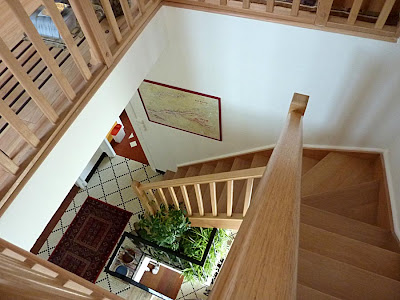 Looking down from the top floor
The pictures in this post show some of the work we've been doing in the house lately. We are getting there — slowly but surely. I'm still working on the glass block windows but I should finish today.
Posted by ckb at 08:20