It's interesting to read about shepherd's pie and cottage pie. An anonymous comment on yesterday's post called my attention to them and the terminology. When I was growing up in North Carolina, we made and ate shepherd's pie, and we made it with potatoes and ground beef. And then I came to France and had hachis parmentier, which was to me approximately the same thing.

We didn't use the term "cottage pie" for the version made with beef. But then, we didn't eat mutton or lamb at all. It wasn't part of our diet, which was based on pork, beef, chicken, and fish/seafood. So for us there was no distinction to be made. I wonder if other Americans used the term cottage pie. Walt says his family didn't, and his mother's shepherd's pie was also made with beef. 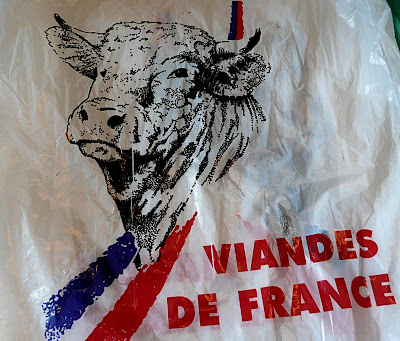 "Meats of France"
Here's what Wikipedia says about it:

The term cottage pie is known to have been in use in 1791, when the potato was being introduced as an edible crop affordable for the poor (cf. "cottage" meaning a modest dwelling for rural workers).

In early cookery books, the dish was a means of using leftover roasted meat of any kind, and the pie dish was lined with mashed potato as well as having a mashed potato crust on top.The term "shepherd's pie" did not appear until the 1870s, and since then it has been used synonymously with "cottage pie", regardless of whether the principal ingredient was beef or mutton. There is now a popular tendency for "shepherd's pie" to be used when the meat is mutton or lamb, with the suggested origin being that shepherds are concerned with sheep and not cattle. This may, however, be an example of folk etymology.

The American Joy of Cooking book has an entry and recipe for shepherd's pie in which it mentions that the British make a distinction between such casseroles made with lamb or mutton — "shepherd's pie" — and ones made with beef — "cottage pie." It says such pies are a favorite "pub food" in England and Ireland.

My Webster's New World Dictionary (1974) has an entry for "shepherd's pie" — "a meat pie baked with a top crust of mashed potatoes," it says, without specifying the meat used. The same dictionary has no entry for "cottage pie." 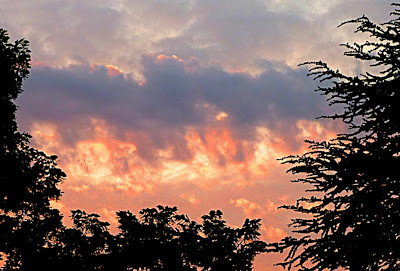 Yesterday's sky at sunset
As an aside, let me mention that when I was growing up in North Carolina, people distinguished the two kinds of potatoes available this way: there were "Irish potatoes" and "sweet potatoes."

Sometimes the simplest, most common things have a very complicated history. And geographical differences in language complicated things even more. That's why some say that the English language is gradually breaking down into dialects that are no longer mutually comprehensible. I know I often have trouble understanding British or Irish speakers of English, especially when they are talking with each other and not directly to me. Accent, vocabulary, and unfamiliar expressions get in the way of comprehension. 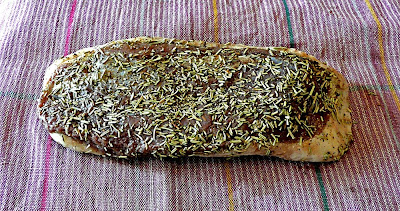 I'm making another salt-cured duck breast "ham" —
this one flavored with dried rosemary and black pepper
A cottage in England, for example is one thing, and we Americans, I think, know the British meaning — a small, modest dwelling out in the country. But if you mention "cottage" where I grew up, the image the term calls up is a summer house at the beach. The summer house might be small and "cottage-like" in the British sense of the term, but it is just as likely to be a grand structure on two or three stories with many bedrooms and bathrooms. Wealthy people owned beach cottages — they would be called résidences secondaires in French.

And then there's hachis parmentier in France. I've seen recipes that vary widely in the number of layers of mashed potato and chopped or ground meat. The simplest version is just hash on the bottom and potato on top. And the Larousse Gastronomique gives a recipe in which the meat hash is stuffed into baked potatoes ("jacket potatoes" in British) that have been partially scooped out. There are as many versions of hachis parmentier as there are cooks, it seems. 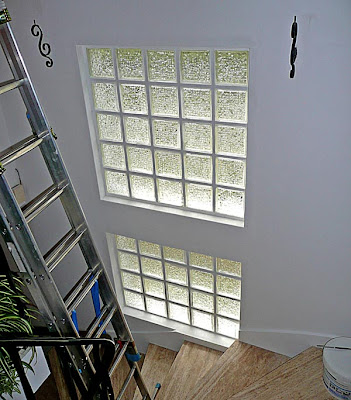 I'm also working on this glass block window —
cleaning, sanding, and painting the sills and the grouting.
The Parmentier of hachis parmentier fame, by the way, was a French scientist who greatly promoted the potato as a food for human consumption, back when the plant was grown mostly as an ornamental — the tubers were fed to livestock. He died in 1813. The Paris Faculty of Medecine had declared potatoes edible in 1772, but people were still reluctant to eat them. They were thought by some to cause leprosy. Tomatoes, too, were considered dangerous or poisonous for many many generations before Europeans finally figured out they were not only edible but delicious.

Here's a link to a recipe for hachis parmentier au canard on the French Marmiton cooking site. That's a kind of shepherd's pie made with a hash of chopped or shredded meat from slow-cooked duck legs and thighs. And here's a recipe for a parmentier de lapin, purée au chèvre — a pie made with a hash of rabbit meat and vegetables, and mashed potatoes that include melted goat cheese. I guess the possibilities are endless.
Posted by Ken Broadhurst at 09:09