One recipe is for a cheese soufflé that his mother made when he was growing up. It's pretty simple, and "although it is slightly less airy than a standard soufflé," Pépin writes, "it is delicious... No one had told [Maman] that the eggs should be separated, with the yolks added to the base sauce and the whites whipped to a firm consistency" before being folded in. So Mme Pépin invented her own version of the fancy soufflé. It's quick and good. 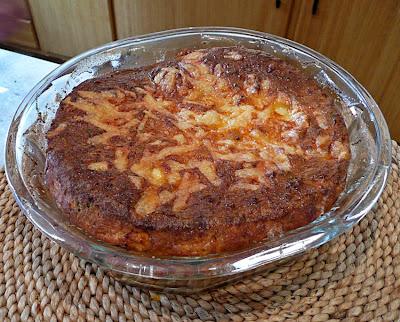 This is an easy cheese soufflé that doesn't require
beating any egg whites. Sprinkle some of the grated
Swiss (or Cheddar) cheese on top before baking.
"Ignorance is bliss," he says, and in this case I agree. This soufflé does rise "to a golden height" even though it is just beaten whole eggs and grated cheese mixed into a béchamel sauce and then baked in a hot oven. I made the béchamel sauce according to Jacques Pépin's instruction and it worked perfectly. Usually I had the milk gradually to the butter-flour base, to avoid lumps, but now I see that that isn't necessary.

Here's is the recipe for a soufflé that will serve three or even four hungry people, depending on side dishes. 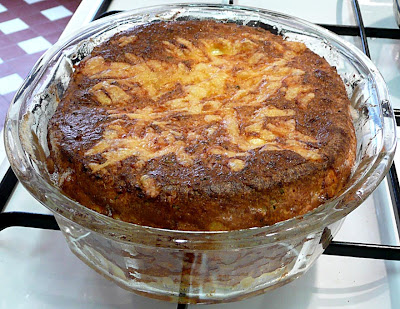 Preheat oven to 400ºF. Butter a 6-cup gratin dish and set it aside.

Melt six tablespoons of butter in a saucepan, and then add the flour and mix well with a whisk. Cook for a few seconds and then add the cold milk all at once. Turn the heat up to hight and keep stirring until the sauce thickens and comes to a strong boil (about 2 minutes). Remove from heat and stir in salt and pepper. Allow about 10 minutes for the béchamel to cool.

Break the eggs into a bowl and beat well with a fork. Add the beaten eggs, grated cheese, and chives into the cooled sauce, mixing well. Pour all into the buttered gratin disk and cook for 30 to 40 minutes, until puffy and well browned on top. Serve immediately.

As you can see from the pictures, this really is a soufflé, despite its simplicity. As with all soufflés, it deflates fairly quickly when it comes out of the oven. The soufflé does not wait for you, I've heard Jacques Pépin say on TV — you must wait for the soufflé.

"Stewed" green beans with lardons and onions
To go with the cheese soufflé, I made U.S. Southern-style "stewed" green beans. In California cuisine, green beans are served basically raw — just very slightly steamed — and while that can be good, I have never lost my taste for the Southern (and French, I might add) way of cooking them long and slow, seasoned with salt-cured or smoked pork, onions, and maybe a bay leaf or two. 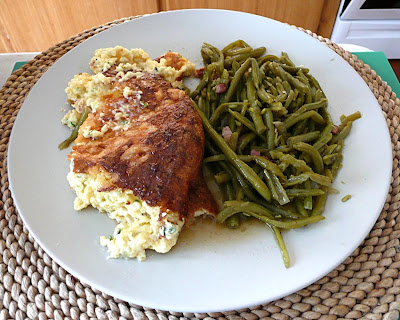 I used frozen green beans in this case, because
it's not yet haricots verts season in France.

I have to say this was one of the best lunches we've had in a while. You can see in the pictures how much the soufflé puffed up despite not having beaten egg whites folded into it. By the way, I cut all the ingredients down by a third because I just wanted to make a four-egg soufflé, and that worked fine.
Posted by ckb at 07:10