I'm happy this morning to see that my transplanted greens have all "stood up" again. After planting them yesterday morning under what turned out to be a hot sun, I watched them all droop. Their leaves were nearly all flat on the ground, and looked wilted.

I watered them generously and we were lucky to have a mild night and morning. The water did the trick, I guess. I saved five mustard plants — we cooked the rest — and more than a dozen collard plants. I have more collard plants if anybody wants any. 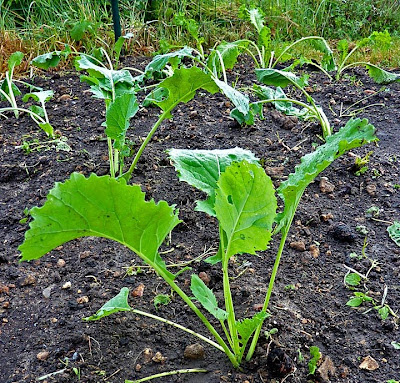 The collard plants I put in yesterday were
mostly standing tall this morning.
Do you know that all cabbages are mustard plants? And vice-versa. One thing I read says that what we call "mustard greens" are actually pretty much any leafy cabbage plants that don't have some other name. Collards, kale, savoy cabbage, Brussels sprouts, broccoli, cauliflower, and even colza, the plant which gives us "canola" oil are all cabbages, or mustards. (The word "colza" appears in my 1974 Webster's Collegiate Dictionary, but I don't think many Americans are familiar with it.) 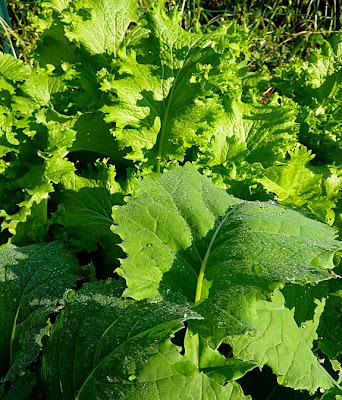 Collard leaves in front; mustard in back
That explains why the fields of little yellow flowers you see in northern California are called "mustard," but in France the same fields of yellow flowers are called, in French, colza. The old name for colza was rape, and the old name for canola oil was rapeseed oil. The oil from the seeds these particular mustard plants has to be refined extensively to be palatable to humans, but in France they say it is the healthiest oil you can use in your cooking. We use huile de colza in our kitchen all the time, for cooking and in salad dressings. 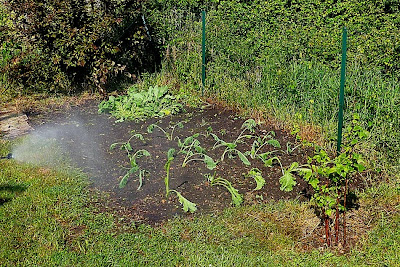 I was afraid the transplanted greens might burn up
under yesterday's hot sun.
Yesterday I cooked a big batch of tender little collard and mustard leaves. It took a while to de-stem and wash them all, but it was worth it. The greens tasted slightly of mustard, but were sweet at the same time. I seasoned them with salt, pepper, hot red pepper flakes, and a couple of tablespoons of duck fat. I poached them in white wine with some veal stock added (veal stock, or fond de veau, is sold in powdered form in French supermarkets). 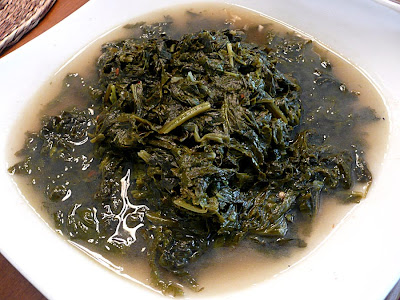 Here are the cooked greens.
Since we were having greens seasoned with duck fat (rather than bacon or some other pork fat), I decided to roast some potatoes in duck fat too. They were potatoes of the variety called Agata in France. They're good potatoes for roasting, frying, or mashing — in other words, they are mealy, not waxy. 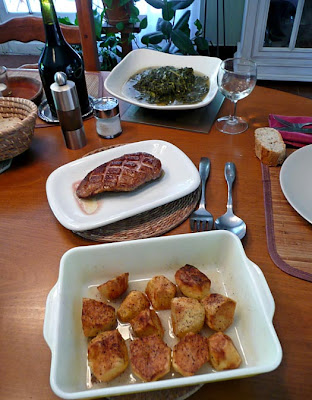 And here is the lunch. I'd be happy to have
the same lunch again today.
To top it all off, Walt seasoned a duck breast filet — un magret de canard — with salt, pepper, and hot paprika, and then he grilled it over high heat until it was seared but still rare. It rested for 10 minutes off the grill under foil and a kitchen towel so that the heat and the juices of the meat would have time to penetrate into the meat evenly. It was amazingly good, I thought, and the greens and potatoes were perfect with it. Duck breast, a red meat cooked rare or even medium, is at least as good as nice beefsteak.

Now I'm hungry again. We have asparagus for lunch today, and a green salad, plus a little bit of duck breast prosciutto that's still left.
Posted by ckb at 09:29