Yesterday afternoon Callie and I spent a couple of hours sitting under the linden tree — le tilleul —out back. It's in full bloom right now, and it's covered in bees and butterflies. When you walk or sit under it, the distinctive buzz of swarming insects fills your ears.

Tilleul is pronounced [tee-YUHL]. In British English, a linden tree is usually called a lime tree. That's confusing to this American, because limes are something entirely different — citrus trees. In North America, the linden is also called a basswood. Linden, lime, basswood, and tilleuls — genus Tilia —grow throughout the temperate Northern Hemisphere, from eastern North America across Europe and into Asia. 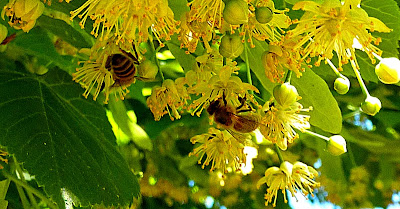 Bees in the linden flowers...
At this time of year, when the linden is in flower, it dominates the "yardscape." Not only is is buzzing with insects, but the fragrance of the flowers is unmistakable and pleasant. They have medicinal uses. They're steeped in boiling water to make what is called an infusion — an herbal "tea," we say, even though real tea leaves are not necessarily part of the mixture — that can be used to treat anxiety, hysteria, migraines, indigestion, nausea, irregular heartbeat, insomnia, rumatism, gout, and a host of afflictions. It's a diuretic, and it tastes good too, at least to some people. 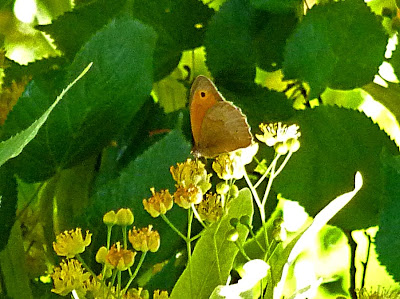 ...and a butterfly
Sitting under a tilleul in flower is also therapeutic. The shade, the buzz, the fragrance — all of it encourages you to relax, or even doze, in a reclining chair. It doesn't hurt that you can enjoy all that only when the weather is warm and there's no wind. Yesterday, I sat under our lawn tent — le barnum, it's called in French, after P.T. — threw the tennis ball a liitle for Callie to chase, listened to the radio, and sipped a glass of white wine. 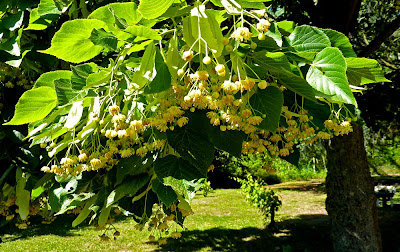 Grape vines under linden flowers
Earlier, I had cut some nice tender leaves from our few grapevines — not leaves from the vineyard, which are sprayed with various chemicals, but leaves from our yard, where we don't use insecticides or herbicides. We made a batch of stuffed grapevine leaves — dolmas, or feuilles de vigne farcies — for lunch today. 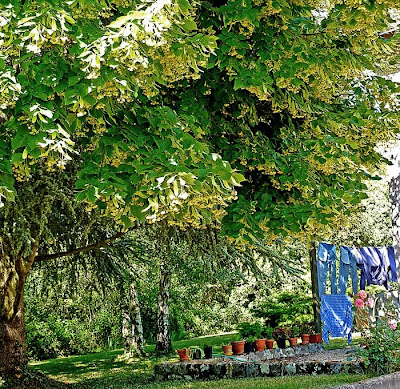 The linden and the laundry
I've posted about dolmas before, including a recipe for the rice and herb stuffing. This time, I chopped up some golden raisins — sultanas — because didn't have any little currants — raisins de corinthe — and I chopped up some shelled pistachio nuts to use in place of the pine nuts — pignons de pin — because pine nuts are so expensive. We tasted a couple of the stuffed leaves yesterday afternoon, and they are good. 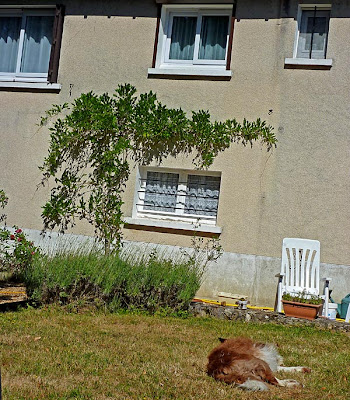 Callie basking in the sun — notice how parched the grass is
We're making Greek-style chicken wings to have with the dolmas at lunch. I'm not sure people in Greece have a particular affinity for chicken wings, but I'm marinating these using the ingredients for a Greek chicken recipe I found: olive oil, lemon juice, garlic, rosemary, thyme, and oregano. We're lucky to have the herbs growing in the garden and yard. 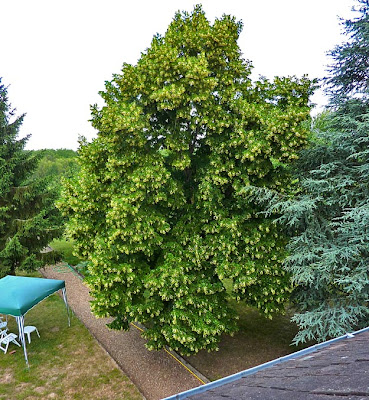 The tilleul and the « barnum » seen from an upstairs window
Blog friends are coming for lunch. We've tidied up, run the vacuum cleaner, and prepared the lunch for the visit. The people visiting are some we have never before met in person. Those who've been reading this blog for a while, and the comments, would know who I'm talking about if I said the name. More about that later.
Posted by ckb at 07:46