Callie, bugs, and our walks

Callie goes crazy when she sees a fly, spider, or moth on the living room ceiling. She can spot one long before we ever notice the bug sitting there. You have to wonder how her eyes perceive the broad expanse of white ceiling. Does it look like sky to her? Outside, she reacts about the same way when she sees the moon, or the sun through clouds when it looks to her, I think, like the moon. 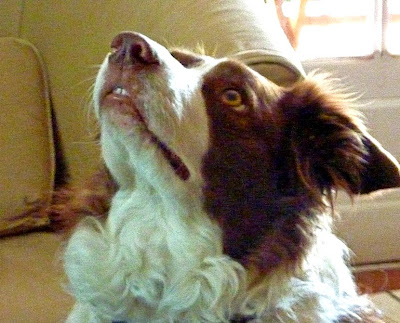 Callie the red border collie — she came
to live with us 4 years ago this week
She doesn't just notice the bug and stare at it, however. She has a special squealy whine she produces only in these moments. If either one of us gets a fly swatter and tries to chase the bug way, then Callie goes really wild. Her bark is with ear-piercing. She's been known to jump up on the furniture in her mounting excitement. She's totally out of control. As soon as the bug is captured, killed, or chased away, she calms back down immediately. 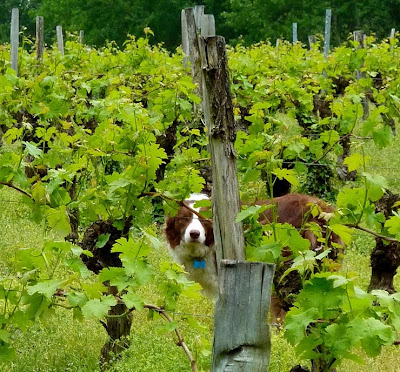 Callie watching me from her spot among the vines
Callie and I take a walk in the vineyard every day. One day we go out in the afternoon, and the next we go out in the morning. That's the schedule, ad infinitum. On the afternoons and mornings when I don't go on the walk, Walt does. It's a schedule we worked out years ago, and we both like it. Callie of course likes it. We humans each get one walk a day, and she gets two. I know Callie never gets tired of it, and I don't either, really. 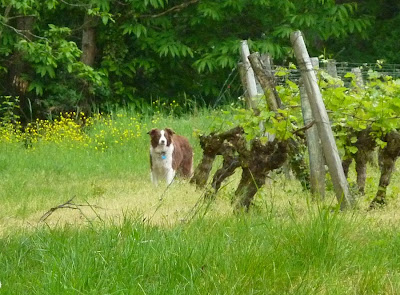 This is Callie looking back and saying:
"Are we going this way today?"
She loves to run through the vines — not just up and down the rows, but also across them, under the support wires and vine canes. Sometimes she disappears from view behind all the green leaves, but I think she always knows where her human companion is. She also tries to lead the walk, deciding which path or direction she wants to go on. But she doesn't mind when one of us decides on a different course. She always follows, even it's at a distance.