I was nosing around on the Washington Post newspaper site on the 'net the other day when I came across a Jacques Pépin recipe. Pépin is a well-known cook, author, and TV personality in the U.S., but he is not really known in France at all.

Jacques Pépin was born in the French city of Bourg-en-Bresse, near Lyons, in 1935. His parents owned and operated a restaurant there. He worked as an apprentice and then a chef in France through the 1950s, mainly in Paris. Then he immigrated to the U.S. in 1959. He worked in the test kitchens of the Howard Johnson's hotel & restaurant chain in the 1969s, as well as in French restaurants in and around New York. He also earned a master's degree in French literature at Columbia University. He started doing cooking shows on TV in the U.S. in the late 1980s. 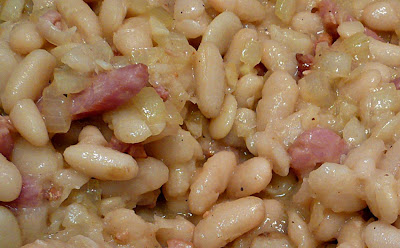 Warm bean and bacon salad
If I have a favorite French chef, it's Jacques Pépin. His recipes, both in his many books and on his TV shows, are completely uncomplicated, unfussy, and straightforward home-style preparations. Because he has spent most of his life in America, he knows how to use American ingredients and products to produce French-style results.

Anyway, I was happy to find Jacques Pépin's recipe for this warm bean and bacon salad. He uses beans out of a can, because they are one vegetable that does not suffer much from the canning process. I actually used dried beans to make my salad, because I had some in the pantry downstairs and wanted to cook them. I used white beans, but other kinds — red beans, pinto beans, black beans, or black-eyed peas — would work just as well. 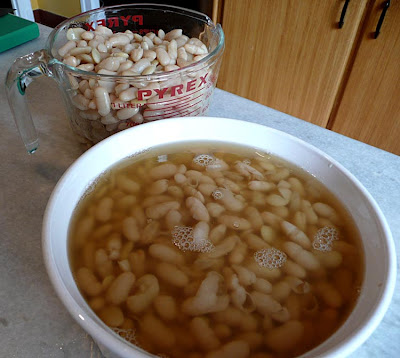 A mixture of plain-cooked, unsalted
white beans and lima beans
Pépin also calls for slab bacon in his recipe. That's not an easy kind of bacon to find in many parts of the U.S., in my experience. Not in California, anyway. But here in France it's an everyday product called lard maigre (lean bacon) or poitrine de porc (pork "belly" or breast). You cut slab bacon into chunks or matchstick shapes to make what French cooks call lardons. The French poitrine comes in smoked or salt-cured versions, or you can buy it fresh (uncured).

A substitute for French poitrine de porc or slab bacon in America is Italian pancetta, which might be easier to find in many places than slab bacon — especially in cities with a large Italian population. You could also use regular American bacon — thick-sliced would be best. 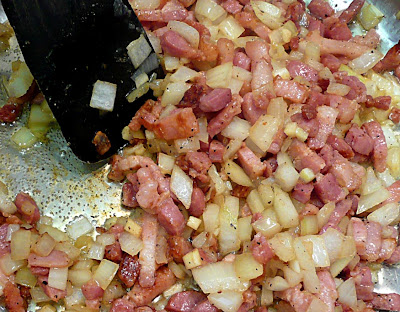 Sautéed lardons, onions, and garlic
The other indispensable ingredients for the bean and bacon salad are onions, garlic, a simple dressing of oil and vinegar, and some fresh herbs. As I said, this is a typical Jacques Pépin recipe — no muss, no fuss; simple, quick, and good. Especially if you use beans out of a can. Be sure to rinse them well before making them into salad.

Here is Jacques Pépin's recipe for the warm bean and bacon salad. I found it later on a Canadian site, with quantities given in North American and metric measurements. 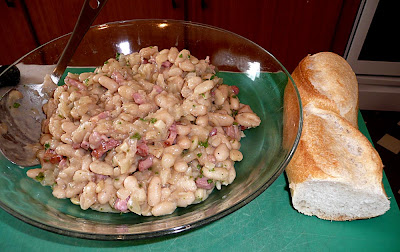 In a medium saucepan over low heat, place bacon. Saute, covered, for about 8 minutes, or until meat has rendered much of its fat. Add onion and garlic and cook, stirring, for about 5 seconds. Transfer contents of saucepan, fat and all, to a large bowl.