Having a vegetable garden in the summer has everything to do with living the life in Saint-Aignan. It seems like every house in the area has one, and you see people out working their soil or weeding or harvesting crops — selon la saison — all the time.

The man down the hill from us, at the main road, has an enormous garden. You could almost call it a farm. His name is François and he grows tons of potatoes, tomatoes, cabbages, and who knows what all. He's out there every time we drive past, unless it's raining. And right now, it's not. I don't know what he can do with all that produce, unless he sells some of it, or supplies a huge extended family. 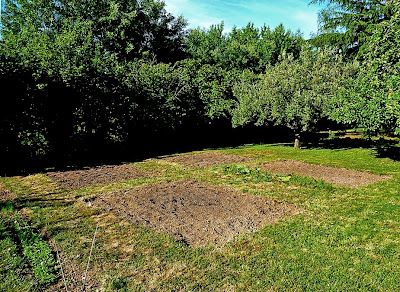 The four garden plots, including a little rhubarb patch
and a long row where we have lettuces, radishes,
and leeks already growing.
People who live in town have garden allotments on the island in the Cher across from Saint-Aignan. It's easy enough to walk over there from town, or drive. Each allotment seems to have a shed of some kind on it, and I think they all have running water. The soil looks to be loamy and rich down there in the river valley. 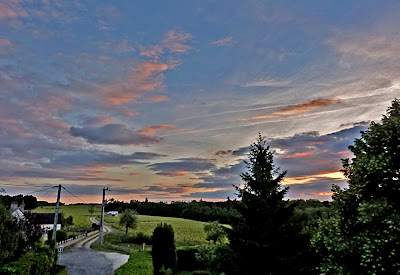 The sky over the vineyard at sunset day before yesterday
Our soil is « de la terre à vignes » — soil that's really only good for growing grape vines. It's hard clay, and full of rocks. We've been working on improving the spot where we first tilled up our four garden plots in 2004. Yesterday, Walt emptied one of our compost piles, by the wheelbarrow load, onto three of the plots. We keep two compost piles going so that we always have some that's ready to use while the other one does its thing — as they say, "compost happens." 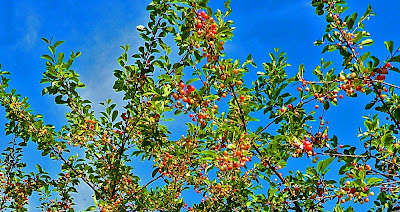 One of the neighborhood cherry trees is full of fruit. But it's
the only one, I can report after an inspection
tour of the hamlet yesterday.
Meanwhile, May 15 has now passed and it's time to set out the tomatoes, eggplants, and all. Walt is still hardening them off, exposing them gradually to more and more sun, in preparation for planting them in the ground. For the time being, they are still under the cold frames. 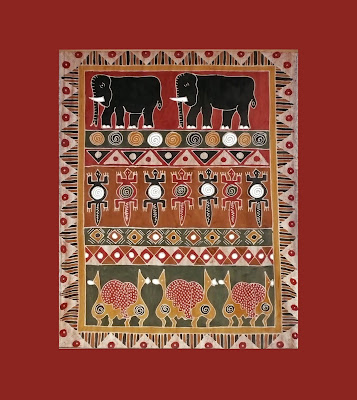 I did a Photoshop mock-up of the red wall with the
batik on it, to see what it will look like after Walt
actually applies red paint over the white.
The ground all around us is dry and powdery, especially the plots that I've tilled again with the rotary cultivator. I did that yesterday — it was a second tilling session for all four plots. The fresh compost got all mixed in. I picked up a lot of egg-sized rocks as I tilled and flung them out over the fence, into the little wood that grows over there. If anybody ever cuts down all those trees and tries to work that soil, he or she will find it as rocky as a Mediterranean beach.