In French — mostly African French, but also in France when necessary — okra are called gombos. You can't find them everywhere, that's for sure. The best source we've found so far is a little Asian grocery store up in Blois, nearly an hour's drive from Saint-Aignan. We were up there last Thursday.

I bought a kilo of fresh okra. The woman at the cash register of the little shop was surprised that I was buying a product that, she said, is mostly bought by her African customers. I explained that okra was very popular in the southern U.S., among black and white people alike. And then I started thinking about what I would do with such a lot of fresh okra. 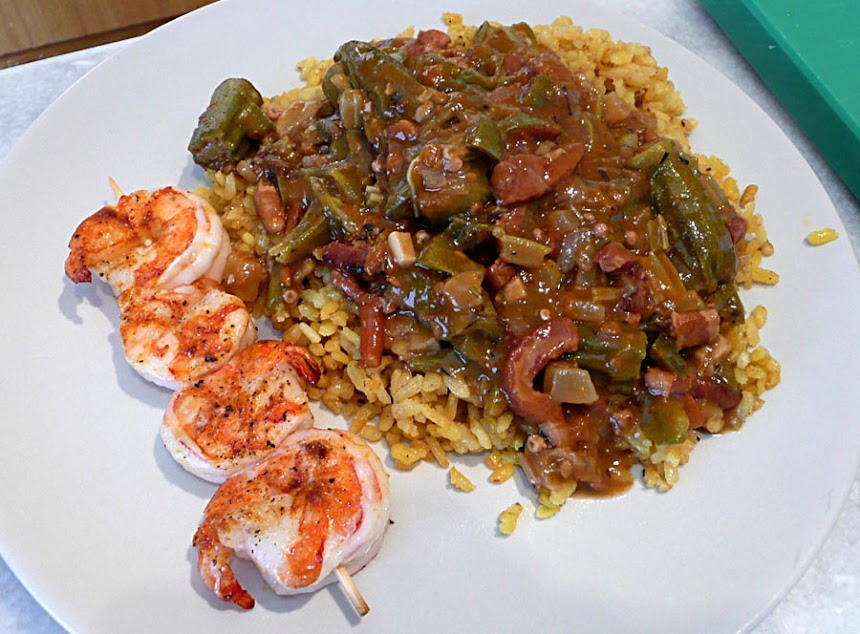 Louisiana gumbo with rice and grilled shrimp
Gumbo, I thought — I haven't made that in years. The extra okra I would blanch and freeze for later. Making gumbo meant we needed some celery and green peppers, so Walt went to the market Saturday morning. Onions, green pepper, and celery are the usual aromatic vegetables used in Louisiana dishes like gumbo and jambalaya. 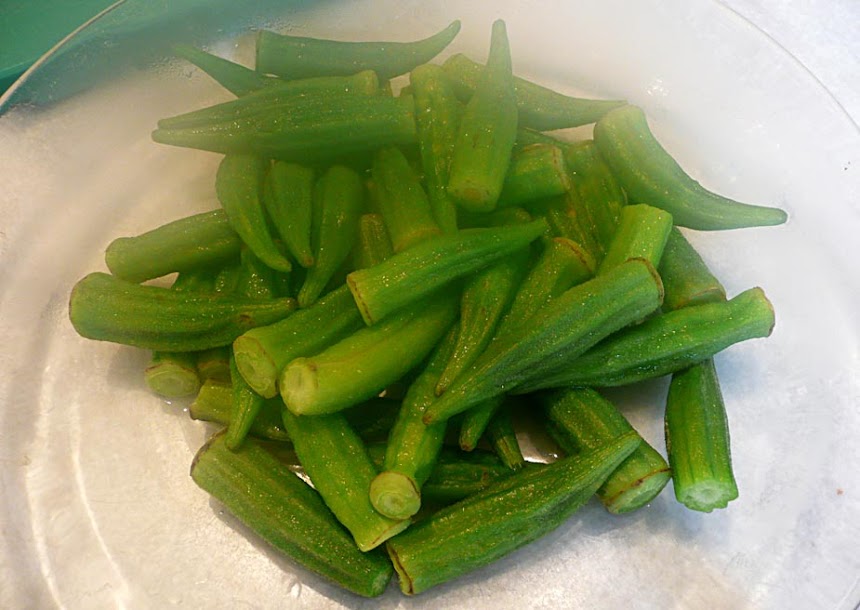 Blanched (parboiled) okra pods
The first step in making a thick, rich, soupy gumbo is to make a roux. Not a French-style roux of butter and flour that you turn into a white sauce or béchamel, but a brown roux. What you do is heat up about half a cup of vegetable oil in a pan and the sprinkle in about half a cup of flour. You stir that well and let that cook on medium heat for 30 minutes, more or less, until the flour turns a nice medium brown color, without letting it scorch. 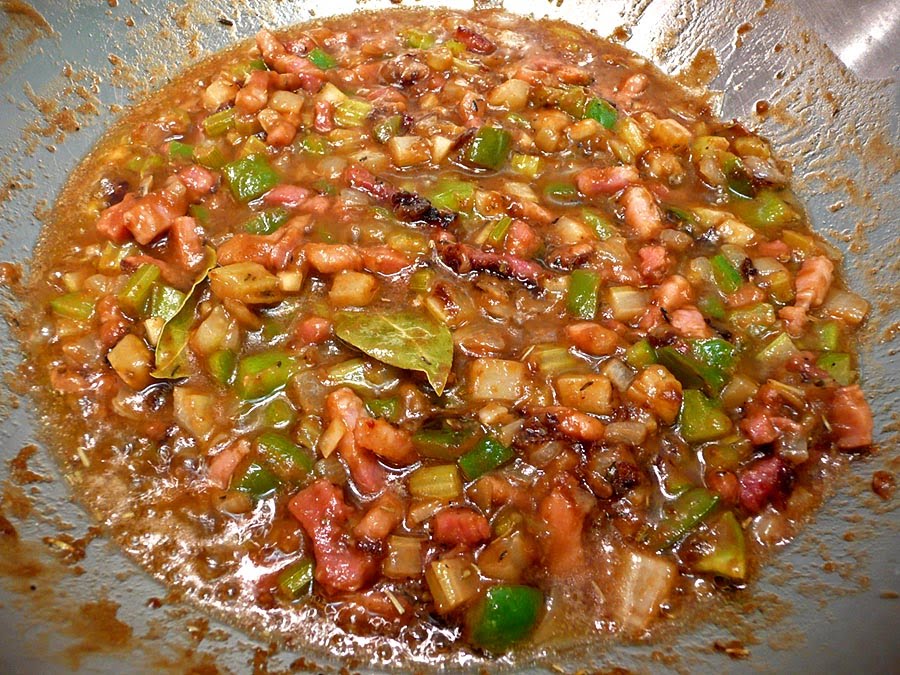 A brown roux with onions, celery, green pepper,
herbs, and lardons cooking in it
The brown roux is both a thickening and a flavor ingredient. While it's cooking, chop up a large onion, a green bell pepper, and two or three stalks of celery. Add them to the brown roux and let it all cook together for another 45 minutes to an hour. Season with salt and pepper, and add some dried herbs — thyme, rosemary, and a couple of bay leaves, for example. Optionally, toss in a cup of lardons or diced ham too. 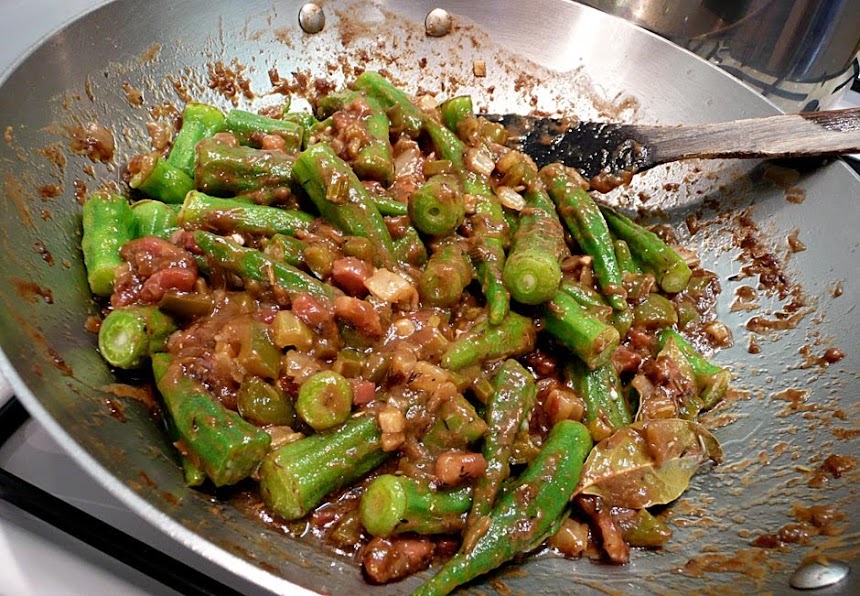 Add the parboiled okra pods to the vegetable-roux mixture
The next step is to add okra. Whether frozen or fresh, the okra needs to be cooked briefly in a little water or sautéed in oil before it goes into the roux mixture. Okra, whether added whole or sliced, will thicken the sauce. Add a chopped fresh tomato too, for flavor and color. 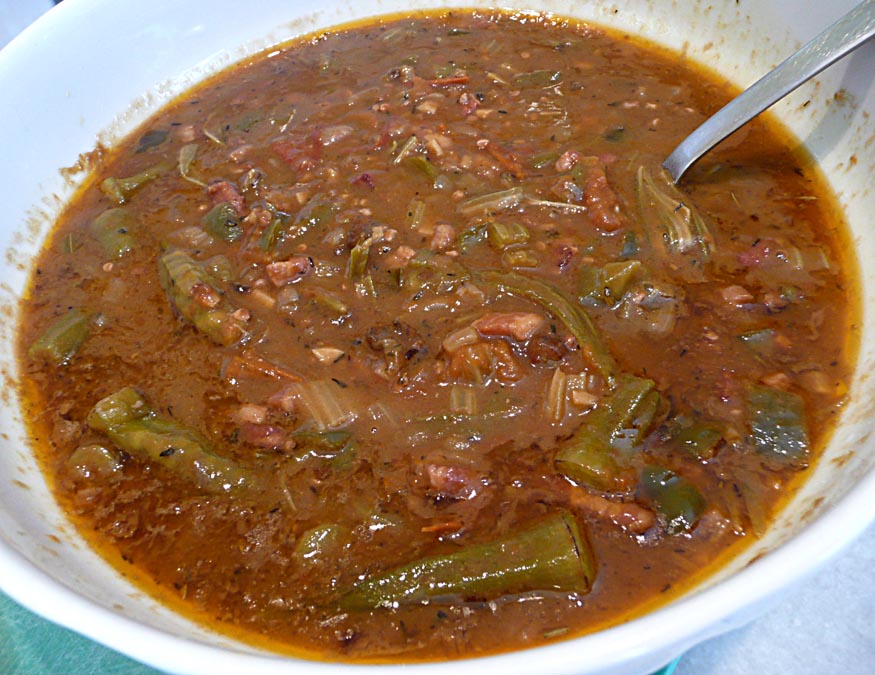 The finished gumbo after long, slow cooking
Once all the vegetables and seasonings are in and cooking, add liquid. If you're making shrimp gumbo, use shrimp broth that you make by boiling the shrimp shells in water for a few minutes. Or use chicken or vegetable broth, or even just water. You need about a liter (a quart) of liquid to make this much gumbo. 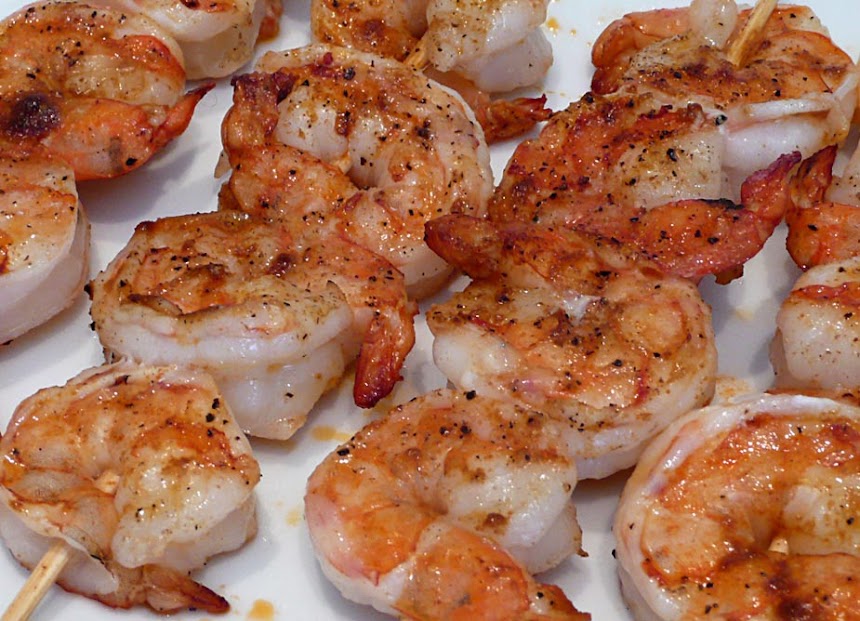 Grilled spicy shrimp
Now it just simmers for an hour or two. It will slowly thicken as it reduces. Everything is already cooked. Toward the end of the cooking time, when you think the gumbo is about ready, add some shrimp or some cooked chicken or sausage to the pan. Raw shrimp will cook quickly, say in 4 or 5 minutes. Or you can cook the shrimp separately like we did — on skewers on the grill. Any other meat you add to the gumbo should already be cooked so it just needs to heat through. 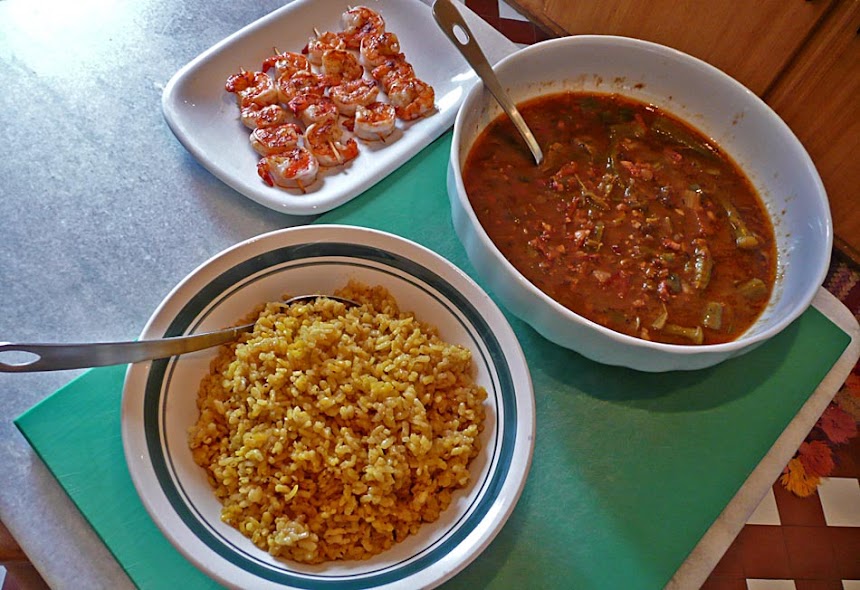 Grilled shrimp, yellow rice, and Louisiana gumbo – with gombos
The only other step is to cook some rice or grits/polenta to eat with the thick, rich gumbo. Enjoy. And don't forget the Tabasco or other hot sauce at the table.
Posted by ckb at 08:38