The first time Walt and I were ever in Saint-Aignan was in 1989. Yes, it was that long ago. On that day we just drove through the town on our way north to Chartres after a trip to Toulouse and Bordeaux. We hardly even noticed Saint-Aignan as we headed north.

We were focused on finding a place to eat and ended up having lunch in a little restaurant in Beaugency. To get there, we drove through the park at Chambord to see the château. We'd been on the road for a week, enjoying beautiful weather, but it started raining as we got closer to Chartres. We saw the cathedral under dark skies, in a heavy downpour.

I wish we had stopped in Saint-Aignan and looked around that day 22 years ago. The next time we came here was in December 2002, when we were looking for a house we might buy for our retirement. We found one, and then we decided to go ahead and move here — lock, stock, and barrel. In June 2003 we arrived. Lately, I've been thinking about how much the Saint-Aignan area has changed in eight years. 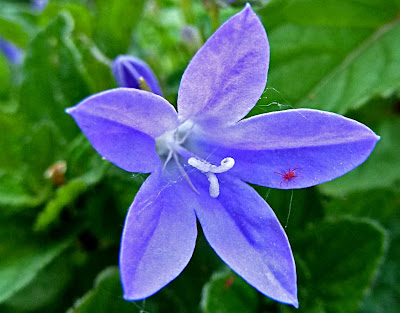 A blue flower and a red spider
We live at the end of what is for all practical puposes a dead-end road — a lane, really — about 700 meters (less than half a mile) off the little highway that runs along the south bank of the Cher River. We are equidistant from the main place (market square) in old Saint-Aignan and the center of the village that is officially our place of residence. From our house to central Saint-Aignan, or to the center of our village, is all of three kilometers — two miles. We're in the country but not remotely so.

When we arrived in 2003, we moved into one of nine houses that make up a hameau (hamlet) on the edge of a big vineyard. It has a name: La Renaudière but no businesses or church. The road doesn't really end at our house, in fact; it continues as a gravel track used mostly by the vignerons who own and work their plots of vines out west of our small piece of property. There isn't much through traffic, though there is some. After a mile on gravel through the vineyard, you arrive at another narrow asphalt road.

None of any of that has changed in eight years. There are still nine houses in our hamlet. Six of them are occupied full-time. Three are occupied infrequently or seasonally. Three of our neighbors have died since we moved here — two of them were a couple, both in their mid-90s, and the other one was a widow of the same age. Another neighbor is now in her late 80s. 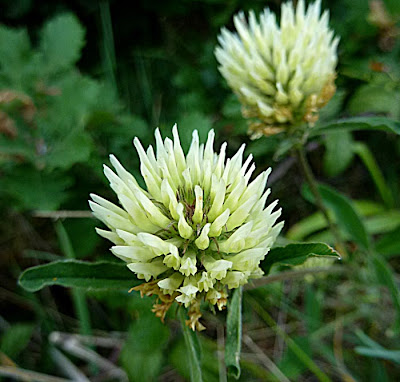 White clover
Our next-door neighbor is a shut-in who has multiple sclerosis. He's about my age. Five other neighbors are also about my age — early to mid-60s. One house in the hamlet is now being fixed up as a vacation house by the son and daughter-in-law of the widow who died at age 95 a year or two ago. The house previously occupied by the elderly couple who died is a rental, and it's now lived in by a group of young people (20s and 30s I'd say) who are currently working as contractors, evidently, at the Saint-Aignan zoo. I don't know how many of them there are, but four or five cars are often parked in their driveway.

Out hamlet hasn't changed, but the area just a few hundred yards down the hill from us, on the other side of a dense thicket of woods, has changed considerably. In 2003, there were a dozen or so houses down there, on big lots along the road that leads up to our house. Now there are at least twice as many, and many are on very small lots. A few years ago, some people who live down there sold two or three acres of land to a developer, who promptly built 11 new houses on it. And an English couple had a small house built along the road, as did two French families.

All in all, another 15 to 20 houses have been built within a kilometer of our house, down near the highway. Many of them are on a little lane that runs parallel to our road just to the south. I'm sure that all the people living in all these houses have pushed the population (between 1000 and 1500) of our village up significantly. A little farther along the highway toward the village center, I can count another 15 or 20 houses that have been built since we first came here looking for a new home in 2002.

New houses on small lots outside Saint-Aignan
I see this as part of a demographic trend in France. People are moving back to the country, partially reversing the mass movement of people out of the countryside and into the cities, where the jobs were, over the past 100 or more years. Nowadays, with high-speed rail, expressways (autoroutes), and universal car ownership, high-speed Internet, and satellite TV, you can live out in the country in rural France without being isolated. You can commute to a city for your job and still enjoy the spaciousness and quiet of country living.

We would be pretty unhappy if the grape-growers started selling off their vineyard plots near our house and putting up houses up there. I don't see any evidence of that happening, but they do say the wine business isn't very profitable these days. There's too much wine produced in France, and too much competition world from new wine areas in the Americas, Australia, New Zealand, and South Africa. 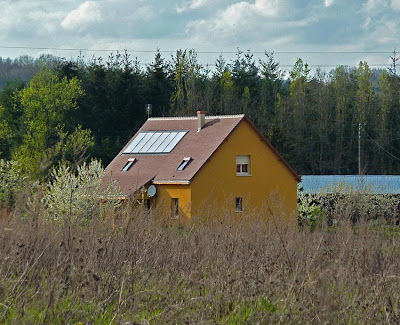 Newly built houses dot the landscape around our village
As things stand, we don't really even notice the new arrivals. Once in a while we'll see groups of people we don't know walking up our road and out into the vineyard. They're out for a stroll. As for car traffic, even down the hill where all the houses are it doesn't seem to have increased much. Maybe there's a lot to traffic down there early in the morning and late in the afternoon, with people going to or coming home from work. We're seldom down there at those hours.

Speaking of our village, it seems to be prospering. One reason, I think, is that the new autoroute that connects Saint-Aignan with Tours to the west and Vierzon and Bourges to the east — and to Orléans and Paris, actually — runs across the western end of our village's territory. it opened two or three years ago. I'm sure the village was well compensated for the land taken over by the new roadway. 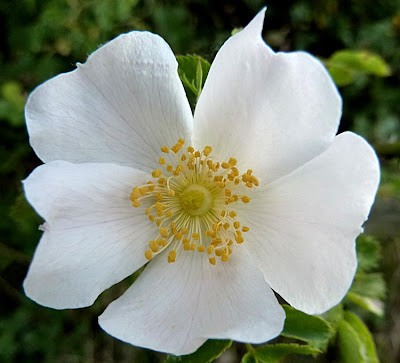 Une rose est une rose est une rose
In the village center, all the electric wires were recently undergrounded. New lamp posts were put up. Sidewalks and curbs have recently been built or improved. Otherwise, there haven't been any big changes. The boulangerie has changed owners twice since 2003, and the new baker has just opened a salon de thé, replacing an old café that was seldom open for business. The café-tabac in the village also got new owners last year, but it doesn't appear to have changed significantly. Madame Barbier is still operating her salon de coiffure down there. The little grocery store changed owners — twice I think — but remains much the same as it was when we arrived.