The garden is going in, little by little. Walt has planted tomatoes, bell peppers (poivrons), summer squash (two varieties), and little French pumpkins called potimarrons. These last are, like other pumpkins, a winter squash — a variety of Cucurbita maxima — and are also known in France as courges chataigne — "chestnut squashes." Each one weighs between one and three kilograms and, as the names suggest, the flesh has the flavor of chestnuts. Potiron means pumpkin in French, and marron means chestnut — poti+marron.

Walt has done all the work of growing seedlings in little pots, nursing them along with frequent squirts of water, uncovering the cold frames as he judges best for sun and warmth, or protection therefrom, and then transplanting the seedlings out into the garden. I just watch, mostly. My part of the job was tilling up the garden plots and getting them ready for the new growing season. 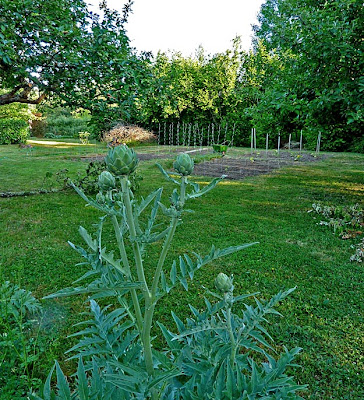 The vegetable garden seen through some artichokes
I've adopted a little plot in the back corner of the yard as my own special project. It's the spot where the previous owners of the house had their compost pile, so the soil there is very rich. It's loose and almost sandy, compared to the hard clay soil of the rest of the yard. The only problem with it is that weeds grow in it very quickly, and in profusion. That means extra work weeding.

Last year I planted potatoes there, but this year I decided to plant "bitter" greens. I sowed seeds for both collard and mustard greens under a cold frame (une mini-serre, or "miniature greenhouse," in French). back in early March. In April I took the cold frame away and one day I transplanted half a dozen mustard plants and a dozen and a half collard plants into the open section of the garden plot, to give them room to spread and grow. 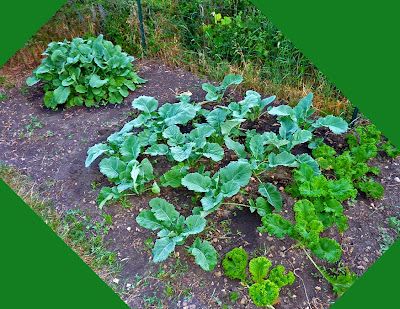 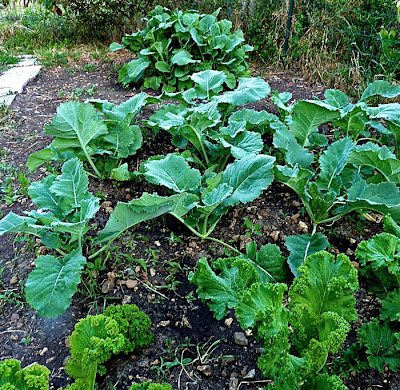 Two photos of my patch of collard and mustard greens
We cooked greens at that point. Mostly we harvested and cooked the mustard greens, leaving a lot of the collards where they had grown, in a big bunch. I figured if the plants I moved didn't survive, then I'd still have some left and I'd be able to try again. They all lived and are doing well, and I still have a thick cluster of crowded collards growing out there. One day soon, I'll harvest and cook those too.

Collard greens, as you probably know, are a southern U.S. specialty. They were always available in California too. Collards, a malformation of the word colewort, meaning "cabbage plant," according to what I've read, originally came from Africa and the Middle East. They feature prominently in Ethiopian cooking, and in Portuguese and Brazilian cooking too. I remember being pleasantly surprised to find collard greens on my plate in an Ethiopian restaurant in Washington DC years ago, when we lived there. 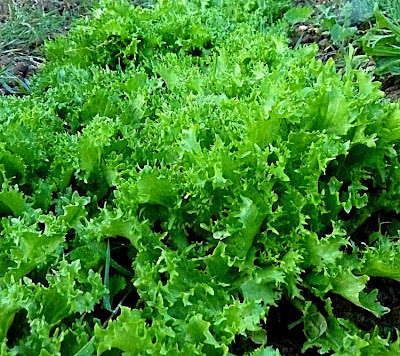 Walt also has a nice little row of frisée lettuces growing.
That's sometimes called curly endive in the U.S.A.
It's about time to thin the the plants and make
salads with the tender young leaves.
Some people find collards and the other plants of the Brassica family — turnips and turnip greens, kale, mustard greens, broccoli, and other cabbages — to be too bitter for their palate. In North Carolina, we always thought collard greens were better in late autumn and winter, after the plants had been touched by frost. In spring and summer, some people put the freshly picked leaves in the freezer for a few hours before they cook them, to simulate that phenomenon.

What I'm growing will be spring or summer collards, and I think I'll plant a new crop in August for the fall and winter. In my tradition, collards need to be cooked for a long time. The greens are meaty and can stand up to that kind of treatment. They are usually flavored with bacon "grease" — in much of America, grease is a negative term, but not in this context. You can also cook them with a ham hock (un jambonneau in French) or with sausages, smoked or not. 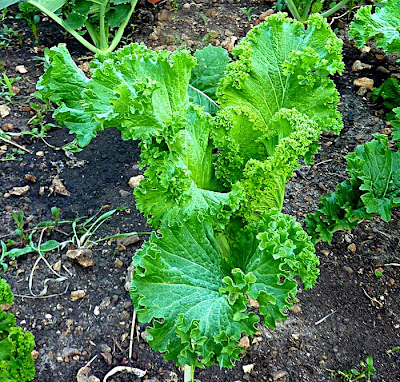 Mustard greens added to collards give them a mustardy flavor.
Since I've been living here in Saint-Aignan, I've taken to flavoring greens with duck fat. I guess I should call that "duck grease" to be authentic about it. In the U.S. South, sometimes people will add some sugar to the pot when they cook collard greens, to cut the bitterness. I used to put some apple juice in mine in California, for the same reason. Here in France, I put in some white wine. Collards in white wine and duck fat — it doesn't get much better than that. I also like them poached in chicken broth.

You don't find collard or mustard greens here in France. The closest greens, really, are chard and spinach, but they don't have the same texture or flavor. A woman from Kentucky who lives in the Auvergne region of central France recently asked me if I could send her some collard seeds. I did. I hope she and her husband have got greens growing in the garden now. Years ago, I worked with a French woman in Washington whose father, on a visit, thought collards were excellent. He took seeds back to his native Champagne and started growing them there. 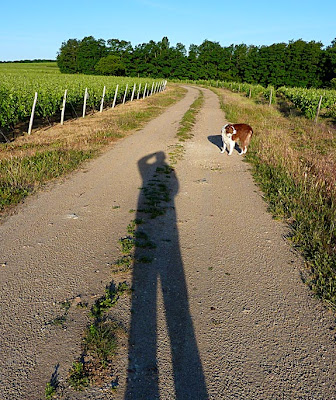 Callie and a tall me out on the road through
the vineyard early today
It's time for me to go out on a walk with Callie. I'll go take some pictures of my collard patch and include them in this post when I get back. The patch probably needs to be watered again, since we didn't get any measurable rain over the weekend. Now the weather is back to sunny and hot. The next chance for rain seems to be Thursday.
Posted by Ken Broadhurst at 06:33